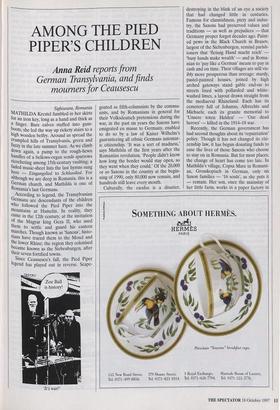 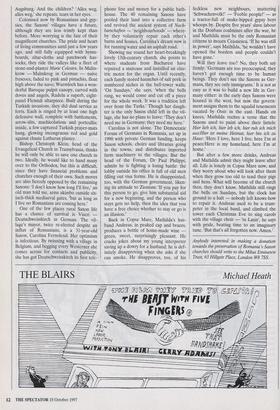 AMONG THE PIED PIPER'S CHILDREN

Sighisoara, Romania MATHILDA Krestel fumbled in her skirts for an iron key, long as a hand and thick as a finger. Bare calves stuffed into gum- boots, she led the way up rickety stairs to a high wooden belfry. Around us spread the crumpled hills of Transylvania, green and fuzzy in the late summer haze. As we climb down again, a pump to the rough-hewn handles of a bellows-organ sends sparrows ricocheting among 15th-century vaulting; a faded music-sheet lists the last hymns sung here ._. Eingangslied to Schlusslied. For although we are deep in Romania, this is a German church, and Mathilda is one of Romania's last Germans.

According to legend, the Transylvanian Germans are descendants of the children who followed the Pied Piper into the mountains at Hamelin. In reality, they Came in the 12th century, at the invitation of the Magyar king Geza IL who used them to settle and guard his eastern marches. Though known as 'Saxons', histo- rians have traced them to the Mosel and the lower Rhine; the region they colonised became known as the Siebenburgen, after their seven fortified towns.

, Since Ceausescu's fall, the Pied Piper legend has played out in reverse. Scape- goated as fifth-columnists by the commu- nists, and by Romanians in general for their Volksdeutsch pretensions during the war, in the past six years the Saxons have emigrated en masse to Germany, enabled to do so by a law of Kaiser Wilhelm's guaranteeing all ethnic Germans automat- ic citizenship. 'It was a sort of madness,' says Mathilda of the first years after the Romanian revolution. 'People didn't know how long the border would stay open, so they went when they could.' Of the 20,000 or so Saxons in the country at the begin- ning of 1990, only 80,000 now remain, and hundreds still leave every month.

Culturally, the exodus is a disaster, destroying in the blink of an eye a society that had changed little in centuries. Famous for clannishness, piety and indus- try, the Saxons had preserved values and traditions — as well as prejudices — that Germany proper forgot decades ago. Paint- ed pews in the Black Church in Brasov, largest of the Siebenburgen, remind parish- ioners that 'fleissig Hand macht reich' — 'busy hands make wealth' — and in Roma- nian to 'pay like a German' means to pay in cash and on time. Their villages are still vis- ibly more prosperous than average: sturdy, pastel-painted houses, joined by high arched gateways stand gable end-on to streets lined with pollarded and white- washed limes, a layout drawn straight from the mediaeval Rhineland. Each has its cemetery full of Johanns, Albrechts and Michaels; each its granite memorial to 'Unsere toten Heiden' — 'Our dead heroes' — killed in the 1914-18 war.

Recently, the German government has had second thoughts about its 'repatriation' policy. Though it has not changed its citi- zenship law, it has begun donating funds to ease the lives of those Saxons who choose to stay on in Romania. But for most places, the change of heart has come too late. In Mathilda's village, Copsa Mare in Romani- an, Grosskopisch in German, only six Saxon families — '16 souls', as she puts it — remain. Her son, once the mainstay of her little farm, works in a paper factory in Augsburg. And the children? 'Alles weg, alles weg,' she repeats, tears in her eyes.

Colonised now by Romanians and gyp- sies, the Saxons' villages have a future, although they are less trimly kept than before. More worrying is the fate of their magnificent churches. The pride and heart of living communities until just a few years ago, and still fully equipped with hymn- boards, altar-cloths and patchwork has- socks, they ride the valleys like a fleet of stone-and-plaster Marie Celestes. In Malin- krow — Malinkrog in German — naive frescoes, faded to pink and pistachio, float high above the nave; Wunnloch has a won- derful Baroque pulpit canopy, carved with doves and angels, Radeln a superb, eight- panel Flemish altarpiece. Built during the Turkish invasions, they did dual service as forts. Each is ringed by at least one high defensive wall, complete with battlements, arrow-slits, machicolations and portcullis; inside, a few captured Turkish prayer-mats hang, glowing incongruous red and gold against chaste Lutheran plaster.

Bishop Christoph Klein, head of the Evangelical Church in Transylvania, thinks he will only be able to save one church in two. Ideally, he would like to hand many over to the Orthodox, but this is difficult, since they have financial problems and churches enough of their own. Such moves are also fiercely opposed by the remaining Saxons: 'I don't know how long I'll live,' an old man told me, arms akimbo outside six- inch-thick mediaeval gates, but as long as I live no Romanians are coming here.'

One of the few places rural Saxon life has a chance of survival is Viscri — Deutschweisskirch in German. The vil- lage's mayor, twice re-elected despite an influx of Romanians, is a 31-year-old Saxon, Carolina Fernolend. Her optimism is infectious. By twinning with a village in Belgium, and begging every Westerner she comes across for contacts and publicity, she has got Deutschweisskirch its first tele- phone line and money for a public bath- house. The 40 remaining Saxons have pooled their land into a collective farm and revived the ancient system of Nach- barschaften — 'neighbourhoods' — where- by they voluntarily repair each other's barns and houses. Carolina's dream now is for running water and an asphalt road.

Showing me round her heart-breakingly lovely 13th-century church, she points to where students from Bucharest have repaired a staircase and installed an elec- tric motor for the organ. Until recently, each family stored haunches of salt pork in numbered niches in the bell-tower walls: 'On Sundays,' she says, 'when the bells rang, we would come and cut off a piece for the whole week. It was a tradition left over from the Turks.' Though her daugh- ter is the only Saxon child left in the vil- lage, she has no plans to leave: 'They don't need me in Germany; they need me here.'

Carolina is not alone. The Democratic Forum of Germans in Romania, set up in 1990 with private German funding, keeps Saxon schools, choirs and libraries going in the towns, and distributes imported farm machinery to the villages. But the head of the Forum, Dr Paul Philippi, admits he is fighting a losing battle: the lobby outside his office is full of old men filling out visa forms. He is disappointed, too, with the German government, liken- ing its attitude to Zionism: 'If you pay for this person to go, give him substantial aid for a new beginning, and the person who stays gets no help, then the idea that you have a free choice whether to stay or go is an illusion.'

Back in Copsa Mare, Mathilda's hus- band Andreas, in peaked cap and braces, produces a bottle of home-made wine — green, sweet, surprisingly pleasant. He cracks jokes about my young interpreter saving up a dowry for a husband; he is def- initely disapproving when she asks if she can smoke. He disapproves, too, of his feckless new neighbours, muttering `Schwachenvolk!' — 'Feeble people!' — as a tractor-full of snake-hipped gypsy boys whoops by. Despite five years' slave labour in the Donbass coalmines after the war, he and Mathilda must be the only Romanian citizens to mourn Ceausescu. 'If he was still in power', says Mathilda, 'he wouldn't have opened the borders and people couldn't have gone.'

Will they leave too? No, they both say firmly: 'Germans are too preoccupied, they haven't got enough time to be human beings. They don't see the Saxons as Ger- mans, they see only immigrants.' It is not as easy as it was to build a new life in Ger- many either: in the early days Saxons were housed in the west, but now the govern- ment assigns them to the squalid tenements vacated by Ossis in the east. Hands on knees, Mathilda recites a verse that the Saxons used to paint above their lintels: Hier lieb ich, hier leb ich, hier nth ich mich auslHier 1st meine Heimat, hier bin ich zu Haus: 'Here I love, here I live, here I'm at peace/Here is my homeland, here I'm at home.'

But after a few more drinks, Andreas and Mathilda admit they might leave after all. Life is lonely in Copsa Mare now, and they worry about who will look after them when they grow too old to tend their pigs and hens. What will become of the church then, they don't know. Mathilda still rings the bells on Sundays, but the clock has ground to a halt — nobody left knows how to repair it. Andreas used to be a trum- peter in the local band, and climbed the tower each Christmas Eve to sing carols with the village choir — 'in Latin', he says with pride, beating time to an imaginary tune. 'But that's all forgotten now. Amen.'

Anybody interested in making a donation towards the preservation of Romania's Saxon churches should write to the Mihai Eminescu Trust, 63 Hillgate Place, London W8 7SS.