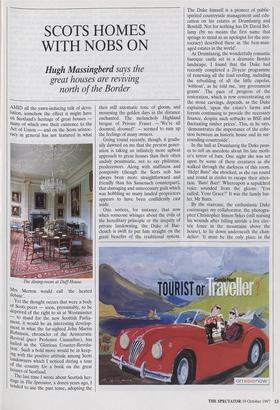 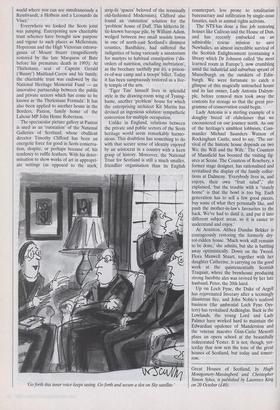 SCOTS HOMES WITH NOBS ON

great houses are reviving north of the Border

AMID all the yawn-inducing talk of devo- lution, somehow the effect it might have Oft Scotland's heritage of great houses — many of which owe their existence to the Act of Union — and on the Scots aristoc- racy in general has not featured in what The dining-room at Duff House.

Yet the thought occurs that were a body of Scots peers — soon, presumably, to be deprived of the right to sit at Westminster — to stand for the new Scottish Parlia- ment, it would be an interesting develop- ment in what the far-sighted John Martin Robinson, chronicler of the Aristocratic Revival (pace Professor Cannadine), has hailed as the 'Glorious Counter-Revolu- tion'. Such a bold move would be in keep- ing with the positive attitude among Scots landowners which I noticed during a tour of the country for a book on the great houses of Scotland. • The last time I wrote about Scottish her- itage in The Spectator, a dozen years ago, I tended to use the past tense, adopting the would call 'the heated then still axiomatic tone of gloom, and mourning the golden days in the distance enchanted. The melancholy Highland brogue of Private Fraser — 'We're all doomed, doomed!' — seemed to sum up the feelings of many owners.

Going round recently, though, it gradu- ally dawned on me that the present gener- ation is taking an infinitely more upbeat approach to great houses than their often unduly pessimistic, not to say philistine, predecessors. Along with stuffiness and pomposity (though the Scots nob has always been more straightforward and friendly than his Sassenach counterpart), that damaging and unnecessary guilt which was hobbling so many landed proprietors appears to have been confidently cast aside.

One notices, for instance, that now when someone whinges about the evils of the hereditary principle or the iniquity of private landowning, the Duke of Buc- cleuch is swift to put him straight on the great benefits of the traditional system. The Duke himself is a pioneer of public- spirited countryside management and edu- cation on his estates at Drumlanrig and Bowhill. Not for nothing has Dr David Bel- lamy (by no means the first name that springs to mind as an apologist for the aris- tocracy) described these as 'the best-man- aged estates in the world'.

At Drumlanrig, the wonderfully romantic baroque castle set in a dramatic Border landscape, I found that the Duke had recently completed a 20-year programme of renewing all the lead roofing, including the rebuilding of all the little cupolas, 'without', as he told me, 'any government grants'. The pace of progress of the restoration, which is now concentrating on the stone carvings, depends, as the Duke explained, 'upon the estate's farms and forests continuing to provide the necessary finance, despite such setbacks as BSE and fluctuating timber prices'. This, as he says, 'demonstrates the importance of the cohe- sion between an historic house and its sur- rounding countryside'.

In the hall at Drumlanrig the Duke paus- es to tell an anecdote about his late moth- er's terror of bats. One night she was set upon by some of these creatures as she walked through the darkness of this room. 'Help! Bats!' she shrieked, as she ran round and round in circles to escape their atten- tion. 'Bats! Bats!' Whereupon a sepulchral voice sounded from the gloom: 'You called, Your Grace?' It was the family but- ler, Mr Batts.

By the staircase, the enthusiastic Duke encourages my collaborator, the photogra- pher Christopher Simon Sykes (still nursing his wounds after falling astride a live elec- tric fence in the mountains above the house), to lie down underneath the chan- delier: 'It must be the only place in the world where you can see simultaneously a Rembrandt, a Holbein and a Leonardo da Vinci.'

Everywhere we looked the Scots joint was jumping. Enterprising new charitable trust schemes have brought new purpose and vigour to such places as Mellerstain, Hopetoun and the High Victorian extrava- ganza of Mount Stuart (magnificently restored by the late Marquess of Bute before his premature death in 1993). At Thirlestane, seat of Captain Gerald (`Bunny') Maitland-Carew and his family, the charitable trust was endowed by the National Heritage Memorial Fund — an innovative partnership between the public and private sectors which has come to be known as 'the Thirlestane Formula'. It has also been applied to another house in the Borders, Paxton, family home of the Labour MP John Home Robertson.

The spectacular picture gallery at Paxton is used as an 'outstation' of the National Galleries of Scotland, whose ebullient director Timothy Clifford has been an energetic force for good in Scots conserva- tion, despite, or perhaps because of, his tendency to ruffle feathers. With his deter- mination to show works of art in appropri- ate settings (as opposed to the stark, strip-lit 'spaces' beloved of the terminally old-fashioned Modernists), Clifford also found an 'outstation' solution for the 'problem' house of Duff. This hitherto lit- tle-known baroque pile, by William Adam, wedged between two small seaside towns in one of north-east Scotland's dimmest counties, Banffshire, had suffered the indignities of being variously a sanatorium for martyrs to habitual constipation ('dis- orders of nutrition, excluding inebriation', as the brochure tactfully put it), a prison- er-of-war camp and a troops' billet. Today it has been sumptuously restored as a live- ly temple of the arts.

'Tiger Tim' himself lives in splendid style in the drawing-room wing of Tyning- hame, another 'problem' house for which the enterprising architect Kit Martin has devised an ingenious solution: sympathetic conversion for multiple occupation.

Unlike in England, relations between the private and public sectors of the Scots heritage world seem remarkably harmo- nious. This doubtless has something to do with that secure sense of identity enjoyed by an aristocrat in a country with a keen grasp of history. Moreover, the National Trust for Scotland is still a much smaller, friendlier organisation than its English 'Go forth this inner voice keeps saying. Go forth and secure a slot on Sky satellite.' counterpart, less prone to totalitarian bureaucracy and infiltration by single-issue fanatics, such as animal rights activists.

The NTS has done a fine job restoring houses like Culzean and the House of Dun, and has recently embarked on an admirable rescue mission to save Newhailes, an almost incredible survival of the Scottish Enlightenment (containing a library which Dr Johnson called 'the most learned room in Europe'), now crumbling amid the industrial and suburban sprawl of Musselburgh on the outskirts of Edin- burgh. We were fortunate to catch a glimpse of this magically untouched house and its last owner, Lady Antonia Dalrym- ple, before removal men took away the contents for storage so that the great pro- gramme of conservation could begin.

Lady Antonia is a sterling example of a doughty breed of chatelaines that we encountered on our journey north. As one of the heritage's nimblest lobbyists, Com- mander Michael Saunders Watson of Rockingham Castle, used to say, 'The sur- vival of the historic house depends on two Ws: the Will and the Wife.' The Countess of Mansfield has boosted the visiting fig- ures at Scone. The Countess of Rosebery, a former stage designer, has rationalised and revitalised the display of the family collec- tions at Dalmeny. 'Everybody lives in, and enjoys, their own "fruit salad",' she explained, 'but the trouble with a "stately home" is that the bowl is too big. Each generation has to sell a few good pieces, buy some of what they personally like, and push the mother-in-law's favourites to the back. We've had to distil it, and put it into different subject areas, so it is easier to understand and enjoy.'

At Arniston, Althea Dundas Bekker is courageously restoring the formerly dry- rot-ridden house. 'Much work still remains to be done,' she admits, but she is battling away optimistically. Down on the Tweed, Flora Maxwell Stuart, together with her daughter Catherine, is carrying on the good work at the quintessentially Scottish Traquair, where the brewhouse producing strong Jacobite ales was revived by her late husband, Peter, the 20th laird.

Up on Loch Fyne, the Duke of Argyll has rejuvenated Inverary after a seemingly disastrous fire, and John Noble's seafood business (the ambrosial Loeb Fyne Oys- ters) has revitalised Ardkinglas. Back in the Lowlands, the young Lord and Lady Palmer have worked hard to maintain the Edwardian opulence of Manderston and the veteran maestro Gian-Carlo Menotti plans an opera school at the beautifully redecorated Yester. It is not, though, yes- terday that now sets the tone of the great houses of Scotland, but today and tomor- row.

Great Houses of Scotland, by Hugh Montgomery-Massingberd and Christopher Simon Sykes, is published by Laurence King on 20 October (f40).