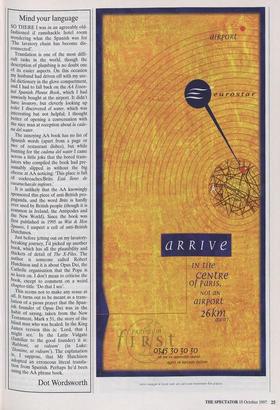 old- fashioned if ramshackle hotel room wondering what the Spanish was for The lavatory chain has become dis- connected'. Translation is one of the most diffi- cult tasks in the world, though the description of plumbing is no doubt one of its easier aspects. On this occasion my husband had driven off with my use- ful dictionary in the glove compartment, and I had to fall back on the AA Essen- tial Spanish Phrase Book, which I had unwisely bought at the airport. It didn't have lavatory, but cleverly looking up toilet I discovered el water, which was interesting but not helpful; I thought better of opening a conversation with the nice man at reception about la cade- na del water. The annoying AA book has no list of Spanish words (apart from a page or two of restaurant dishes), but while hunting for the cadena del water I came across a little joke that the bored trans- lators who compiled the book had pre- sumably slipped in without the big cheese at AA noticing: 'This place is full of cockroaches/Brits: Estci lleno de cucarachaslde ingleses? It is unlikely that the AA knowingly Sponsored this piece of anti-British pro- paganda, and the word Brits is hardly ever used by British people (though it is common in Ireland, the Antipodes and the New World). Since the book was first published in 1995 as Wat & Hoe Spaans, I suspect a cell of anti-British Dutchmen. Just before jetting out on my lavatory- breaking journey, I'd picked up another book, which has all the plausibility and thickets of detail of The X-Files. The author is someone called Robert Hutchison and it is about Opus Dei, the Catholic organisation that the Pope is so keen on. I don't mean to criticise the book, except to comment on a weird chapter-title: `Do that I see'. This seems not to make any sense at all.. It turns out to be meant as a trans- lation of a pious prayer that the Span- ish founder of Opus Dei was in the habit of saying, taken from the New Testament, Mark x 51, the story of the blind man who was healed. In the King James version this is: 'Lord, that I might see.' In the Latin Vulgate familiar to the good founder) it is: ,Rabboni, ut videam' (in Luke: ?amine, ut videam). The explanation Is, I suppose, that Mr Hutchison adopted an erroneous literal transla- tion from Spanish. Perhaps he'd been using the AA phrase book.