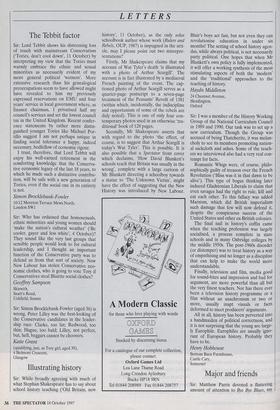 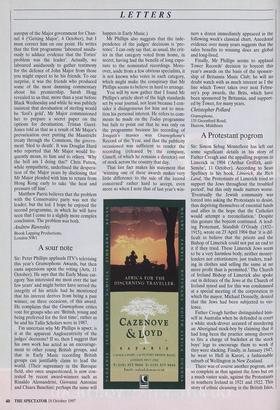 autopsy of the Major government for Chan- nel 4 (`Getting Major', 4 October), but I must correct him on one point. He writes that the first programme 'laboured assidu- ously to adduce evidence that the Tories' problem was the leader'. Actually, we laboured assiduously to gather testimony for the defence of John Major from those you might expect to be his friends. To our surprise, it was the friends who produced some of the most damning commentary about his premiership. Sarah Hogg revealed to us that, more than a year before Black Wednesday and while he was publicly insistent that devaluation of sterling would be 'fool's gold', Mr Major commissioned her to prepare a secret paper on the options for devaluation. Tristan Garel- Jones told us that as a result of Mr Major's prevarication over putting the Maastricht treaty through the Commons, the govern- ment 'bled to death'. It was Douglas Hurd who reported that Mr Major would fre- quently moan, to him and to others, 'Why the hell am I doing this?' Chris Patten, while sympathetic, underlined the despera- tion of the Major years by disclosing that Mr Major pleaded with him to return from Hong Kong early to take 'the heat and pressure off him'.

Matthew Parris believes that the problem with the Conservative party was not the leader, but the led. I hope he enjoyed the second programme, in which he will have seen that I come to a slightly more complex conclusion. The problem was both.