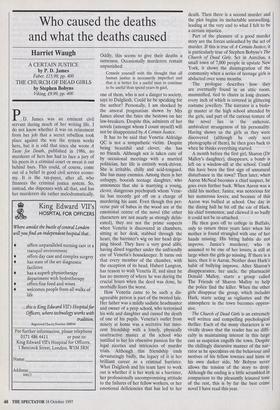 P. D. James was an eminent civil servant during much of her writing life. I do not know whether it was on retirement from her job that a secret rebellion took place against the way the system works here, but it is odd that since she wrote A Taste for Death, published in 1986, no murderer of hers has had to face a jury of his peers in a criminal court or sweat it out behind bars. This could, of course, come out of a belief in good civil service econo- my. It is the tax-payer, after all, who finances the criminal justice system. So, instead, she dispenses with all that, and has her murderers die rather melodramatically.

Oddly, this seems to give their deaths a sameness. Occasionally murderers remain unpunished: Console yourself with the thought that all human justice is necessarily imperfect and that it is better for a useful man to continue to be useful than spend years in gaol,

one of them, who is not a danger to society, says to Dalgliesh. Could he be speaking for the author? Personally, I am shocked by the amoral pragmatism shown by Mrs James about the fates she bestows on her law-breakers. Despite this, admirers of her novels (amongst whom I count myself) will not be disappointed by A Certain Justice,

It has to be said that Venetia Aldridge QC is not a sympathetic victim. Despite being beautiful and clever, she has no friends. Although sex is taken care of by occasional meetings with a married politician, her life is entirely work-driven. She is irritable, chilly arid acid-tongued. She has many enemies. Among them is her unhappy, boorish teenage daughter, who announces that she is marrying a young, clever, dangerous psychopath whom Vene- tia has recently got off on a charge of murdering his aunt. Even though this per- verse pair of babes in the wood are at the emotional centre of the novel (the other characters are not nearly as strongly delin- eated), they are not the prime suspects when Venetia is discovered in chambers, sitting at her desk, stabbed through the heart, the barrister's wig on her head drip- ping blood. They have a very good alibi, having dined together under the unfriendly eye of Venetia's housekeeper. It turns out that every member of the chamber, with the exception of its head, Hubert Langton, has reason to wish Venetia ill, and since he has no memory of where he was during the crucial hours when the deed was done, he morbidly fears the worst.

How Venetia came to be such a dis- agreeable person is part of the twisted tale. Her father was a mildly sadistic headmaster and owner of a prep school, who terrorised his wife and daughter and caused the death of one of his pupils. Venetia's outlet from misery at home was a secretive but inno- cent friendship with a lonely, physically unattractive master at the school who instilled in her his obsessive passion for the legal niceties and intricacies of murder trials. Although this friendship ends devastatingly badly, the legacy of it is her brilliant career as a criminal barrister. What Dalgliesh and his team have to work out is whether it is her work as a barrister, her professionally uncompromising attitude to the failures of her fellow workers, or her emotional deficiencies that has led to her

death. Then there is a second murder and the plot begins its ineluctable unravelling, leading at the very end to what I felt to be a certain injustice.

Part of the pleasure of a good murder story are the forces unleashed by the act of murder. If this is true of A Certain Justice, it is particularly true of Stephen Bobyns's The Church of Dead Girls. Set in Aurelius, a small town of 7,000 people in upstate New York, it shows the disintegration of the community when a series of teenage girls is abducted over some months.

The prologue describes how they are eventually found in an attic room, mummified, tied to chairs in long dresses, every inch of which is covered in glittering costume jewellery. The narrator is a biolo- gy master at the high school attended by the girls, and part of the curious texture of the novel lies in the unheroic, ambivalent strangeness of his personality. Having shown us the girls as they were discovered (although he only sees photographs of them), he then goes back to when he thinks everything started.

A month before the first girl, Sharon (Dr Malloy's daughter), disappears, a bomb is left on a window-sill at the school. Could this have been the first sign of unnatural disturbance in the town? Then later, when Aaron McNeal becomes a chief suspect, he goes even further back. When Aaron was a child his mother, Janice, was notorious for her numerous lovers, and because of this Aaron was bullied at school. One day in the dining hall he bit off the ear of Hark, his chief tormentor, and chewed it so badly it could not be re-attached,

He then goes off to college in Buffalo, only to return three years later when his mother is found strangled with one of her hands missing. His biting habits do not improve. Janice's murderer, who is assumed to be one of her lovers, is still at large when the girls go missing. If there is a hero, then it is Aaron. Neither does Hark's habit of bullying improve. After Sharon's disappearance, her uncle, the pharmacist Donald Malloy, starts a group called The Friends of Sharon Malloy to help the police find the killer. When the other girls disappear the group, which includes Hark, starts acting as vigilantes and the atmosphere in the town becomes oppres- sive.

The Church of Dead Girls is an extremely well written and compelling psychological thriller. Each of the many characters is so vividly drawn that the reader has no diffi- culty in maintaining interest in this large cast as suspicion engulfs the town. Despite the chillingly discursive manner of the nar- rator as he speculates on the behaviour and motives of his fellow townies and hints at his own darker side, Mr Bobyns never allows the tension of the story to drop. Although the ending is a little scrambled in comparison to the pleasantly leisured tone of the rest, this is by far the best crime novel I have read this year.