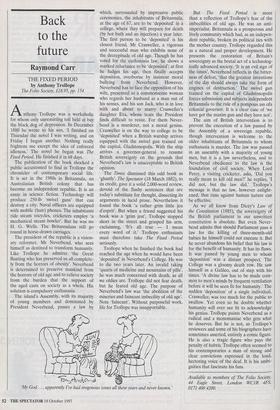 Back to the future

THE FIXED PERIOD by Anthony Trollope The Folio Society, 118.95, pp. 154 Anthony Trollope was a workaholic for whom only unremitting toil held at bay the black dog of depression. In December 1880 he wrote to his son, 'I finished on Thursday the novel I was writing, and on Friday I began another. Nothing really frightens me except the idea of enforced idleness.' The novel he began was The Fixed Period. He finished it in 68 days.

The publication of the book shocked a public accustomed to find in Trollope the chronicler of contemporary social life. It is set in the 1980s in Britannula, an Australasian British colony that has become an independent republic. It is an essay in science fiction. Technology will produce 250-lb 'swivel guns' that can destroy a city. Naval officers are equipped with mobile (hair) phones. The inhabitants ride steam tricycles, cricketers employ 'a mechanical steam bowler'. But he was no H. G. Wells. The Britannulans still go round in horse-drawn carriages.

The president of the republic is a vision- ary reformer, Mr Neverbend, who sees himself as destined to transform humanity. Like Trollope he admires 'the Great Banting who has preserved us all complete- ly from the horrors of obesity'. Neverbend is determined to preserve mankind from the horrors of old age and to relieve society from the burden that the support of the aged casts on society as a whole. His solution is compulsory euthanasia.

The island's Assembly, with its majority of young members and dominated by President Neverbend, passes a law by which, surrounded by impressive public ceremonies, the inhabitants of Britannula, at the age of 67, are to be 'deposited' in a college, where they will prepare for death (by hot bath and an injection) a year later. The first person to be 'deposited' is his closest friend, Mr Crasweller, a vigorous and successful man who exhibits none of the decrepitude of old age. Though he has voted for the euthanasia law, he shows a marked reluctance to be 'deposited'; at first he fudges his age, then finally accepts deposition, overborne by insistent moral bullying from Neverbend. However, Neverbend has to face the opposition of his wife, presented as a commonsense woman who regards her husband as a man out of his senses, and his son Jack, who is in love with and about to marry Crasweller's daughter Eva, whose tears the President finds difficult to resist. For them Never- bend is a murderer, not a moral genius. Crasweller is on the way to college to be 'deposited' when a British warship arrives equipped with the swivel gun trained on the capital, Gladstonopolis. With the ship arrives a governor-general to resume British sovereignty on the grounds that Neverbend's law is unacceptable to British opinion.

The Times dismissed this odd book as 'ghastly'. The Spectator (18 March 1882), to its credit, gave it a solid 2,000-word review, devoid of the flashy sentences that are today's substitute for thought, dissecting its arguments in lucid prose. Nevertheless it found the book 'a rather grim little jeu d'esprit'. But when a friend suggested his book was a 'grim jest', Trollope stopped short in the street and grasped his arm, exclaiming, 'It's all true — I mean every word of it.' Trollope enthusiasts must therefore take The Fixed Period seriously.

Trollope when he finished the book had reached the age when he would have been 'deposited' in Neverbend's College. He was to die two years later. An invalid taking 'quarts of medicine and mountains of pills', he was much concerned with death, as all we oldies are. Trollope did not fear death, but he feared old age. The purpose of Neverbend's law was 'the abolition of the miseries and faineant imbecility of old age'. Note 'faineant'. Without purposeful work, life for Trollope was insupportable.

My God. . . apparently I've had erogenous zones all these years and never known.' But The Fixed Period is more than a reflection of Trollope's fear of the imbecilities of old age. He was an anti- imperialist. Britannula is a prosperous and lively community which had, as an indepen- dent republic, broken its political ties with the mother country. Trollope regarded this as a natural and proper development. He presents the restoration of Britain's sovereignty as the brutal act of a technolog- ically advanced society. 'It is an evil sign of the times', Neverbend reflects in the bitter- ness of defeat, 'that the greatest inventions of the day should always take the form of engines of destruction.' The swivel gun trained on the capital of Gladstonopolis forces submission and subjects independent Britannula to the rule of a pompous ass ofa colonial governor. It is a clear case of 'we have got the maxim gun and they have not'.

The aim of British intervention is to prevent the execution of a law passed by the Assembly of a sovereign republic, though intervention is welcome to the older inhabitants of Britannula to whom euthanasia is murder. The law was passed in an assembly with a majority of young men, but it is a law nevertheless, and to Neverbend obedience to the law is the foundation of civil society. When Lord Percy, a visiting cricketer, asks, 'Did you really mean to kill old men?' he replies, 'I did not, but the law did.' Trollope's message is that no law, however enlight- ened, that runs against human nature can be effective.

As we all know from Dicey's Law of the Constitution (1885), the sovereignty of the British parliament in our unwritten constitution is absolute. But even Never- bend admits that should Parliament pass a law for the killing of three-month-old babies he himself could not execute it. But he never abandons his belief that his law is for the benefit of humanity. It has its flaws. It was passed by young men to whom 'deposition' was a distant prospect. The College was a gloomy death row. He saw himself as a Galileo, out of step with his times. 'A divine law has to be made com- mon to men's minds by frequent ventilation before it will be seen fit for humanity.' The sudden 'deposition' of a single individual, Crasweller, was too much for the public to swallow. Yet even so he doubts whether humanity will ever see fit to acknowledge his genius. Trollope paints Neverbend as a radical and a monomaniac who gets what he deserves. But he is not, as Trollope's reviewers and some of his biographers have sometimes asserted, entirely a comic figure. He is also a tragic figure who pays the penalty of hubris. Trollope often seemed to his contemporaries a man of strong and clear convictions expressed in the loud, hectoring voice of the deaf. It is his ambi- guities that fascinate his fans.