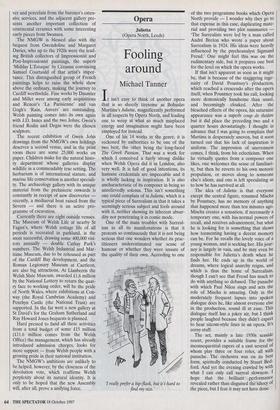 It isn't easy to think of another opera that is so sheerly tiresome as Bohuslav Martinu's Julietta, magnificently performed in all respects by Opera North, and leading one to weep at what so much misplaced energy and imagination might have been employed for instead.

One of his 14 works in the genre, it is reckoned by authorities to be one of the two best, the other being the long-faced The Greek Passion. That was a work for which I conceived a fairly strong dislike when Welsh Opera did it in London, also very well. It is full of good intentions, its humane credentials are impeccable and it is wholly lacking in inspiration. It 'is also uncharacteristic of its composer in being so unrelievedly solemn. This isn't something one could complain of in Julietta, which is a typical piece of Surrealism in that it takes a seemingly serious subject and fools around with it, neither showing its inherent absur- dity nor penetrating it in comic mode.

One of the main troubles with Surreal- ism in all its manifestations is that it protests so continuously that it is not being serious that one wonders whether its prac- titioners underestimated our sense of humour or whether they were unsure of the quality of their own. According to one 'I really prefer a hip-flask, but it's hard to find my size.' of the two programme books which Opera North provide — I wonder why they go to that expense in this case, duplicating mate- rial and providing two plot summaries — 'The Surrealists were led by a man called Andre Breton who wrote a paper about Surrealism in 1924. His ideas were heavily influenced by the psychoanalyst Sigmund Freud.' One might feel this was on the rudimentary side, but it prepares one best for the level on which the opera works.

If that isn't apparent as soon as it might be, that is because of the staggering inge- nuity of David Pountney's jiroduction, which reached a crescendo after the opera itself, when Pountney took his call, looking more demonically handsome than usual, and becomingly cloaked. After the bleached effects of the opera, his saturnine appearance was a superb coup de thed tre but it did place the preceding two and a quarter hours devastatingly. I thought in advance that I was going to complain that Martinu is desperately uneven, but it soon turned out that his lack of inspiration is uniform. The impression of unevenness comes, I think, from his eclecticism. When he virtually quotes from a composer one likes, one welcomes the sense of familiari- ty, but then he reverts to his own motoric propulsion, or moves along to someone else's idiom, and one is left speculating as to how he has survived at all.

The idea of Julietta is that everyone except the central figure, renamed Mischa by Pountney, has no memory of anything that happened more than ten minutes ago. Mischa creates a sensation, if necessarily a temporary one, with hin normal powers of recall, and receives advancement, but what he is looking for is something that shows how tormenting having a decent memory can be. For he recalls the lovely voice of a young woman, and is seeking her. His jour- ney is largely in vain, and he may even be responsible for Julietta's death when he finds her. He ends up in the world of dreams, where logical anarchy reigns, and which is thus the home of Surrealism, though I can't see that Freud has much to do with anything so debased. The panache with which Paul Nilon sings and acts the role of Mischa is amazing. Only in the moderately frequent lapses into spoken dialogue does he, like almost everyone else in the production, sound ill at ease. This dialogue itself has a jokey air, but I think people laughed because they didn't expect to hear sitcom-style lines in an opera. It's corny stuff.

The set, mainly a late 1930s seaside resort, provides a suitable frame for the inconsequential capers of a cast several of whom play three or four roles, all with panache. The orchestra was on its best form, spiritedly conducted by Stuart Bed- ford. And yet the evening crawled by with what I can only call surreal slowness. 1 hope that the brilliant performance revealed rather than disguised the idiocy of the piece, but I fear it may not have done.