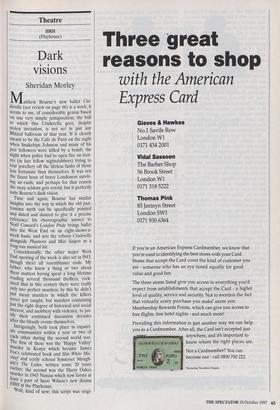 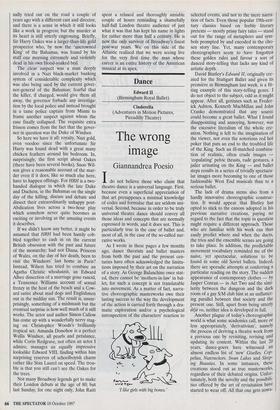 atthew Bourne's new ballet Cin- derella (see review on page 66) is a work, it seems to me, of considerable genius based on one very simple juxtaposition; the ball to which this Cinderella goes, despite stolen invitation, is not set in just any Blitzed ballroom of that year. It is clearly meant to be the Café de Paris on the night When Snakehips Johnson and many of his Jazz followers were killed by a bomb, the night when police had to open fire on loot- ers (in fact fellow nightclubbers) trying to tear jewellery off the lifeless limbs of those less fortunate than themselves. It was not the finest hour of brave Londoners surviv- ing air-raids, and perhaps for that reason the story seldom gets retold; but it perfectly suits Bourne's dark vision.

Time and again, Bourne has similar insights into the way in which the old pan- tomime myth can be specifically pointed and dated and danced to give it a precise reference; his choreographic answer to Noel Coward's London Pride brings ballet into the West End on an eight-shows-a- week basis, and sets the reborn Cinderella alongside Phantom and Miss Saigon as a long-run musical hit.

Coincidentally, the other major West End opening of the week is also set in 1943, though there all resemblance ends. My father, who knew a thing or two about these matters having spent a long lifetime reading several thousand thrillers, reck- oned that in this century there were really Only two perfect murders; by this he didn't Just mean murders in which the killers never got caught, but murders containing just the right degree of historical and social interest, and snobbery with violence, to jus- tify their continued discussion decades after the bloody events themselves. Intriguingly, both took place in expatri- ate communities within a year or two of each other during the second world war. The first of these was the 'Happy Valley' murder in Kenya which became James Fox's celebrated book and film White Mis- chief and eerily echoed Somerset Maugh- arn's The Letter, written some 20 years earlier; the second was the Harry Oakes murder in 1943 Nassau which now forms at ,east a part of Snoo Wilson's new drama riR1/ at the Playhouse. Well, kind of new; this script was origi- nally tried out on the road a couple of years ago with a different cast and director, and there is a sense in which it still looks like a work in progress; but the murder at its heart is still utterly engrossing. Briefly, Sir Harry Oakes was a larger-than-life gold prospector who, by now the 'uncrowned King' of the Bahamas, was found by his staff one morning extremely and violently dead in his own blood-soaked bed.

The clear suspect was a man deeply involved in a Nazi black-market banking system of considerable complexity which was also being used by the current gover- nor-general of the Bahamas; fearful that the killer, if charged, would give them all away, the governor forbade any investiga- tion by the local police and instead brought in a tame police captain from Miami to frame another suspect against whom the case finally collapsed. The requisite extra frisson comes from the fact that the gover- nor in question was the Duke of Windsor.

So here we have it all: royalty, Nazi gold, even voodoo since the unfortunate Sir Harry was found dead with a great many chicken feathers around his bedroom. In, surprisingly, the first script about Oakes (there have been several books), Snoo Wil- son gives a reasonable account of the mur- der even if it does, like so much else here, have to happen offstage. For HRH is a two- handed dialogue in which the late Duke and Duchess, in the Bahamas on the single day of the killing, discuss and debate and dissect their extraordinarily unhappy post- Abdication lives across a two-hour play which somehow never quite becomes as exciting or involving as the amazing events it describes.

If we didn't know any better, it might be assumed that HRH had been hastily cob- bled together to cash in on the current British obsession with the past and future of the monarchy; had not • Diana, Princess of Wales, on the day of her death, been to visit the Windsors' last home in Paris? Instead, Wilson has tried to combine an Agatha Christie whodunnit, an Edward Albee dissection of a marriage gone rancid, a Tennessee Williams account of sexual frenzy in the heat of the beach and a Cow- ard satire about mad dogs and Englishmen out in the midday sun. The result is, unsur- prisingly, something of a mishmash but the eventual surprise is how well much of it still works. The actor and author Simon Callow has come up with a wonderfully nervy stag- ing on Christopher Woods's brilliantly tropical set. Amanda Donohoe is a perfect Wallis Windsor, all pearls and petulance, while Corn Redgrave, not often an actor I admire, manages an equally impressive lookalike Edward VIII, finding within him surprising reserves of schoolboyish charm rather like Stan Laurel on speed. The trou- ble is that you still can't see the Oakes for the trees.

Not many Broadway legends get to make their London debuts at the age of 80; but last Sunday, for one night only, John Raitt spent a relaxed and thoroughly amiable couple of hours reminding a shamefully half-full London theatre audience of just what it was that has kept his name in lights for rather more than half a century. He is now the only survivor of Broadway's finest post-war years. We on this side of the Atlantic realised that we were seeing live for the very first time the man whose career is an entire history of the American musical at its apex.