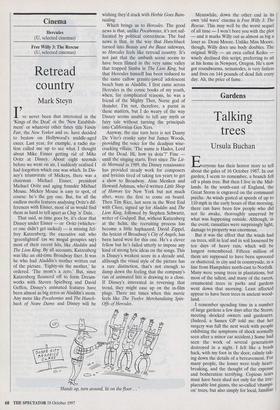 Iye never been that interested in the 'Kings of the Deal' or the 'New Establish- ment' or whatever other fancy title Vanity Fair, the New Yorker and co. have decided to bestow on Hollywood's middle-aged execs. Last year, for example, a radio sta- tion called me up to see what I thought about Mike Eisner getting rid of Mike Ovitz at Disney. About eight seconds before we went on air, I suddenly realised I had forgotten which one was which. In Dis- ney's triumvirate of Mickeys, there was a chairman Michael Eisner, president Michael Ovitz and aging founder Michael Mouse. Mickey Mouse is easy to spot, of course: he's the gay one. But, for all the endless media features analysing Ovitz's dif- ferences with Eisner, most of us would find them as hard to tell apart as Chip 'n' Dale.

That said, as time goes by, it's clear that Disney under Eisner — or Ovitz (whichev- er one didn't get sacked) — is missing Jef- frey Katzenberg, the executive suit who `greenlighted' (as we mogul groupies say) most of their recent hits, like Aladdin and The Lion King. By all accounts, Katzenberg was like an old-time Broadway fixer. It was he who had Aladdin's mother written out of the picture. Eighty-six the mother,' he ordered. 'The mom's a zero.' But, since Katzenberg flounced off to form Dream- works with Steven Spielberg and David Geffen, Disney's animated features have been almost as big zeros as Aladdin's mom. Any more like Pocahontas and The Hunch- back of Notre Dame and Disney will be wishing they'd stuck with Herbie Goes Ram- raiding.

Which brings us to Hercules. The good news is that, unlike Pocahontas, it's not suf- focated by political correctness. The bad news is that, in the way that Hunchback turned into Beauty and the Beast sideways, so Hercules feels like retread country. It's not just that the ambush scene seems to have been filmed in the very same valley that trapped Simba in The Lion King, but that Hercules himself has been reduced to the same callow granite-jawed adolescent beach bum as Aladdin. I first came across Hercules in the comic books of my youth, when, for complicated reasons, he was a friend of the Mighty Thor, Norse god of thunder. I'm not, therefore, a purist in these matters, but I do weary of the way Disney seems unable to tell any myth or fairy tale without turning the principals into Californian Gen Xers.

Anyway, the star turn here is not Danny De Vito's cranky satyr but James Woods, providing the voice for the deadpan wise- cracking villain; 'The name is Hades, Lord of the Dead. Hi, how ya doin'?' Fine — until the singing starts. Ever since The Lit- tle Mermaid in 1989, the Disney renaissance has provided steady work for composers and lyricists tired of taking ten years to get a show to Broadway. Alan Menken and Howard Ashman, who'd written Little Shop of Horrors for New York but not much after, were the first to come on board. Then Tim Rice, last seen in the West End with Chess, signed up for Aladdin and The Lion King, followed by Stephen Schwartz, writer of Godspell. But, without Katzenberg at the helm, the recruiting process has become a little haphazard. David Zippel, the lyricist of Broadway's City of Angels, has been lured west for this one. He's a clever fellow but he's failed utterly to impose any kind of strong lyric ideas on the songs. This is Disney's weakest score in a decade and, although the visual style of the picture has a rare distinction, that's not enough to damp down the feeling that the company's run of animated hits is drawing to a close. If Disney's interested in reversing that trend, they might ease up on the in-film plugs. There are times when this movie feels like The Twelve Merchandising Spin- Offs of Hercules.

'Hands up, turn around, lie on the floor . . ' Meanwhile, down the other end in its own 'old wave' cinema is Free Willy 3: The Rescue. This may well be the worst sequel of all time — I won't bore you with the plot — and it marks Willy out as almost as big a loser as Demi Moore. Unlike Miss Moore, though, Willy does use body doubles. The original Willy — an orca called Keiko — wisely declined this script, preferring to sit at his home in Newport, Oregon. He's now got roundworms, nematodes, is very listless and lives on 144 pounds of dead fish every day. Ah, the price of fame.