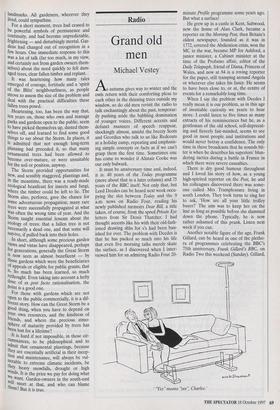 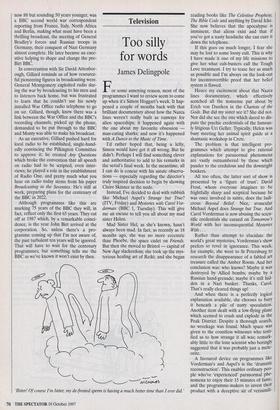 Aautumn gives way to winter and the owls return with their comforting pleas to each other in the thinning trees outside my window, so do old men revisit the radio to talk enchantingly about the past, temporar- ily pushing aside the babbling domination of younger voices. Different accents and defunct manners of speech reappear, shockingly almost, amidst the breezy Scots and Geordies who talk to us like Redcoats at a holiday camp, repeating and emphasis- ing simple concepts or facts as if we can't grasp them the first time. Sometimes one has come to wonder if Alistair Cooke was our only bulwark. It must be anniversary time and, indeed, it is: 40 years of the Today programme (more about that in a later column) and 75 years of the BBC itself. Not only that, but Lord Deedes can be heard next week occu- pying the slot between Today and the 9 a.m. news on Radio Four, reading his newly published memoirs Dear Bill, a title taken, of course, from the spoof Private Eye letters from Sir Denis Thatcher. I had thought accents like his with their old-fash- ioned drawing shhs for s's had been ban- ished for ever. The problem with Deedes is that he has packed so much into his life that even five morning talks merely skate the surface, as I discovered when I inter- viewed him for an admiring Radio Four 20- minute Profile programme some years ago. But what a surface!

He grew up in a castle in Kent, Saltwood, now the home of Alan Clark, became a reporter on the Morning Post, then Britain's oldest newspaper, founded as it was in 1772, covered the Abdication crisis, won the MC in the war, became MP for Ashford, a junior minister, a Cabinet minister at the time of the Profumo affair, editor of the Daily Telegraph, friend of Diana, Princess of Wales, and now at 84 is a roving reporter for the paper, still tramping around Angola or wherever else takes his fancy. He seems to have been close to, or at, the centre of events for a remarkably long time.

When I say the problem with Deedes I really mean it is our problem, as in this age of insatiable curiosity we yearn to hear more. I could listen to five times as many extracts of his reminiscences but he, as a gentleman of the old school, self-deprecat- ing and fiercely fair-minded, seems to see good in most people and institutions and would never betray a confidence. The only time in these broadcasts that he sounds bit- ter is when he describes his superiors' blun- dering tactics during a battle in France in which there were severe casualties.

There is dry good humour throughout and I loved his story of how, as a young high-spirited reporter on the Post, he and his colleagues discovered there was some- one called Mrs Trampleasure living in south London. They took turns to ring her to ask, 'How are all your little trolley buses?' The aim was to keep her on the line as long as possible before she slammed down the phone. Typically, he is now rather ashamed of this prank. Listen next week if you can.

Another notable figure of the age, Frank Gillard, can be heard in one of the pletho- ra of programmes celebrating the BBC's 75th anniversary, Frank Gillard's BBC, on Radio Two this weekend (Sunday). Gillard, "'Yes" means "', Charles.' now 88 but sounding 50 years younger, was a BBC second world war correspondent reporting from France, Italy, North Africa and Berlin, making what must have been a thrilling broadcast, the meeting of General Bradley's forces and Russian troops in Germany, their conquest of Nazi Germany almost complete. He later became an exec- utive helping to shape and change the pre- Birt BBC.

In conversation with Sir David Attenbor- ough, Gillard reminds us of how resource- ful pioneering figures in broadcasting were. General Montgomery exploited radio dur- ing the war by broadcasting to his men and to listeners back home, but was frustrated to learn that he couldn't use his newly installed War Office radio telephone to go on air. Gillard, though, knew there was a link between the War Office and the BBC's recording channels, picked up the phone, demanded to be put through to the BBC and Monty was able to make his broadcast.

As an executive, Gillard pushed hard for local radio to be established, single-hand- edly convincing the Pilkington Committee to approve it; he created Any Questions which broke the convention that all speech on radio had to be scripted, even inter- views; he played a role in the establishment of Radio One, and pretty much what you hear on radio today stems from his paper Broadcasting in the Seventies. He's still at work, preparing plans for the centenary of the BBC in 2022.

Although programmes like this are marking 75 years of the BBC they will, in fact, reflect only the first 65 years. They cut off at 1987 which, by a remarkable coinci- dence, is the year John Birt arrived at the corporation. So, unless there's a pro- gramme coming up that I'm not aware of, the past turbulent ten years will be ignored. That will have to wait for the centenary programmes, but something tells me the BBC as we've known it won't exist by then.