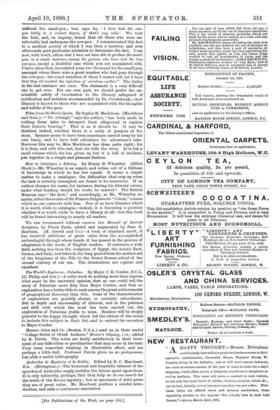 D.C.L. (G. Philip and Son.)—A critic need do nothing more than express what must be the universal opinion, that no one could tell the story of Palestine more fitly than Major Conder, and that no exploration has a better title to rank among the great achievements of geographical discovery than this. Some of the characteristics of exploration are possibly absent, or certainly subordinate. But in depth and universality of interest, and in the patience and skill with which the work has been carried out, the exploration of Palestine yields to none. Readers will be deeply grateful to the happy thought which led the editors of the series to include this subject in their list, and to entrust its execution to Major Conder.

"College Series of Greek Authors," Homer's Odyssey, edited by B. Perrin. The notes are fairly satisfactory in their treat- ment of any difficulties or peculiarities that may occur in the text. They seem somewhat wanting in illustrative effect, and are perhaps a little dull. Professor Perrin gives us no prolegomena, but adds a useful bibliography.