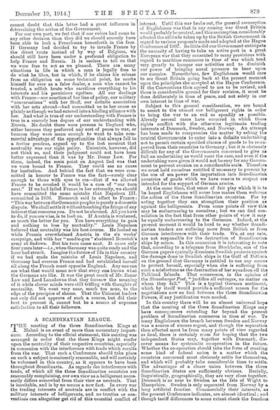 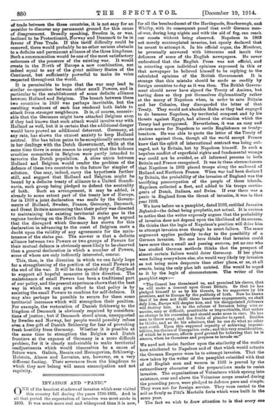 THE meeting of the three Scandinavian Kings at Malmo is an event of more than momentary import- ance. According to the official statement, this meeting was arranged in order that the three Kings might confer upon the neutrality of their respective countries, especially in connexion with the interference with trade which results from the war. That such a Conference should take place on such a subject is eminently reasonable, and will certainly be welcomed. in this country, as it appears to have been throughout Scandinavia. As regards the interference with trade, of which all the three Scandinavian countries are reasonably complaining, our own view as a belligerent neces- sarily differs somewhat from their view as neutrals. That is inevitable, and is by no means a new fact. In every war the trading interests of neutrals are in conflict with the military interests of belligerents, and, no treaties or con- ventions can altogether get rid of this essential conflict of interest. Until this war broke out, the general assumption of Englishmen was that in any coming war Great Britain would probably be neutral, and this assumption considerably affected the attitude taken up by the British Government in regard to various proposals made and adopted at the Hague Conference of 1907. So little did our Government anticipate the necessity of having to take an active part in a great European war that they consented to many provisions with regard to maritime commerce in time of war which tend very greatly to hamper our activities and to diminish our power of bringing naval pressure to bear upon our enemies. Nevertheless, few Englishmen would care to see Great Britain going back at the present moment upon the principles she accepted at the Hague Conference. If the Conventions then agreed to are to be revised, and there is considerable ground for their revision, it must be done deliberately in time of peace, and not solely in our own interest in time of war.

Subject to this general consideration, we are bound to assert to the utmost our belligerent rights in order to bring the war to an end as speedily as possible. Already several cases have occurred in which those rights conflict with the otherwise legitimate trading interests of Denmark, Sweden, and Norway. An attempt has been made to compromise the matter by asking the neutral Governments to enter into a definite undertaking not to permit certain specified classes of goods to be re-ex- ported from their countries to Germany ; but it is obviously difficult for any of the Governments concerned to give as full an undertaking as would meet the case, and even if the undertaking were given it would not be easy for any Govern- ment to prevent evasion on a considerable scale. Therefore we must hold ourselves entitled if necessary to prevent by the use of sea power the importation into Scandinavian countries of goods which we have reason to suspect are intended for the support of German armies.

At the same time, that sense of fair play which it is to be hoped Englishmen will never lose makes them welcome the action of the three Scandinavian countries. For by acting together they can strengthen their position as against the belligerents. From some points of view this may be embarrassing to ourselves ; but we can find con- solation in the fact that from other points of view it may be equally embarrassing to the Germans. Indeed, at the present moment it would be bard to say whether Scandi- navian traders are suffering more from British or from German interference with their trade. We, at any rate, are not responsible for the destruction of Scandinavian ships by mines. In this connexion it is interesting to note that, according to a telegram from Stockholm, one of the German papers cynically dismisses Swedish protests against the damage done to Swedish ships in the Gulf of Bothnia on the ground. that Germany is entitled to use any means to protect herself, especially when she is suffering from such a misfortune as the destruction of her squadron off the Falkland Islands. That occurrence, in the opinion of the Strassburger Post, " justifies all outrages, no matter on whom they fall." This is a typical German sentiment, which by itself would provide a sufficient reason for the negotiations now on foot between the three Scandinavian Powers, if any justification were needed.

In this country there will be an almost universal hope that the meeting of the three Scandinavian Rings may have consequences extending far beyond the present problem of Scandinavian commerce in time of war. To many Englishmen the breach between Sweden and Norway was a source of sincere regret, and though the separation then effected must be from many points of view regarded as final, there is certainly rcom for hoping that the two independent States may, together with Denmark, dis- cover means for systematic co-operation in the future. Whether the co-operation should take the form of creating some kind of federal union is a matter which the countries concerned must obviously settle for themselves, and which will probably take considerable time to settle. The advantages of a closer union between the three Scandinavian States are sufficiently obvious. Racially, linguistically, geographically, they are very close together. Denmark is as near to Sweden as the Isle of Wight to Hampshire. Sweden is only separated from Norway by a long artificial frontier. Commercially their interests, as the present Conference indicates, are almost identical ; and though tariff differences to some extent check the freedom of trade between the three countries, it is not easy for an outsider to discover any permanent ground for this cause of disagreement. Broadly speaking, Sweden is, or was, inclined to be Protectionist, Norway and Denmark to be in favour of Free Trade. If this tariff difficulty could be removed, there would probably be no other serious obstacle to a definite and permanent alliance of the three kingdoms. Such a consummation would be one of the most satisfactory outcomes of the pressure of the existing war. It would create in the North of Europe a new combination, not indeed equal to any of the great military States of the Continent, but sufficiently powerful to make its voice respected throughout the world.

It is permissible to hope that the war may lead to similar co-operation between other small Powers, and in particular to the establishment of some definite alliance between Holland and Belgium. The breach between these two countries in 1830 was perhaps inevitable, but the resulting weakness of each has rendered both liable to attack from stronger neighbours. It is, of course, conceiv- able that the Germans might have attacked Belgium even if they had known that such attack would involve war with Holland as well, but it is certain that the additional danger would have proved an additional deterrent. Germany, at any rate, has shown the utmost anxiety to keep Holland neutral. She has taken pains to be exceptionally courteous

in her dealings with the Dutch Government, while at the same time there is some reason to suspect that the hideous cruelties committed in Belgium were partly intended to terrorize the Dutch population. A close union between Holland and Belgium would render the problem of the defence of these two countries in the future far simpler of solution. One may, indeed, carry the hypothesis further still, and suggest that Holland and Belgium might be bound by a definite treaty of alliance to a United Scandi- navia, each group being pledged to defend the neutrality of both. Such an arrangement, it may be added, is already to some extent part of the treaty law of Europe, for in 1908 a joint declaration was made by the Govern- ments of Holland, Sweden, France, Germany, Denmark, and Great Britain announcing that their policy was directed to maintaining the existing territorial status quo in the regions bordering on the North Sea. It might be argued that the disregard which Germany has shown for this declaration in advancing to the coast of Belgium casts a doubt upon the validity of any agreements for the main- tenance of the status quo. The answer is that a definite alliance between two Powers or two groups of Powers for their mutual defence is obviously more likely to be observed than a general declaration in which a number of Powers, some of whom are only indirectly interested, concur.

This, then, is the direction in which we can fairly hope for a strengthening of the position of the small Powers at the end of the war. It will be the special duty of England to support all hopeful measures in this direction. The maintenance of small Powers has been a traditional part of our policy, and the present experience shows that the best way in which we can give effect to that policy is by assisting the small Powers to combine for self-defence. It may also perhaps be possible to secure for them some territorial increases which will strengthen their position. For example, the restoration of Danish Schleswig to the kingdom of Denmark is obviously required by considera- tions of justice ; but if Denmark stood alone, unsupported by Sweden and Norway, her people would possibly refuse even a free gift of Danish Schleswig for fear of provoking fresh hostility from Germany. Whether it is possible at the same time to strengthen the Belgian and Dutch frontiers at the expense of Germany is a more difficult problem, for it is clearly undesirable to make territorial readjustments which would themselves be a cause of future wars. Galicia, Bosnia and Herzegovina, Schleswig- Holstein, Alsace and Lorraine, are, however, on a very different footing. Their severance from the kingdoms to which they now belong will mean emancipation and not captivity.