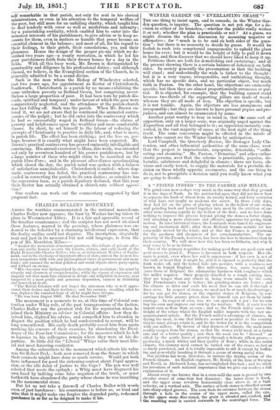 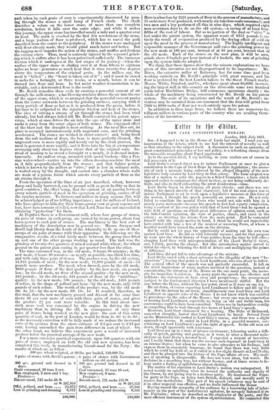 Two of the primary requisites for making good flour are

good corn and good stones to grind it. France is favoured in both respects. Her cli- mate is '0:cilia], even where her soil is ungenerous : if her corn is not of the bulk or heart that it might be, still it is ripened so perfectly that the husk scales off, and the kernel falls into powder, with a readiness not known in humid England. Her mill-stones, too, unite beyond all (save those of Belgium) the adamantine hardness with toughness which the miller requires. Once properly chiselled to a rough cutting face, they are longer than any others in being worn smooth by the corn. The Frenchman's corn is better ; his grinding-stones are better ; and his climate so dries and cools his meal that he can sift it through a finer sieve. In respect of stones, we need not be at much disadvantage ; for we can get his stones, or the superior stones of Belgium, by sea- carriage for little greater prices than he himself can get them by land- carriage. In respect of corn, too, we can approach a par ; for we can buy his corn and improve our own by the mixture. Still, it costs less to import corn as flour than as corn ; and so the French miller saves the freight of the refuse which the English miller imports with the raw un- manufactured article. But the French miller's advantage of climate, in drying the meal, is one that hitherto seemed so peculiar to his country that he must always retain it, and be the better for it in the competition with our millers. By favour of that dryness of climate, the meal more readily escapes from the stones, so that the stones yield meal at a faster rate and of a better quality ; and then the meal can be " dressed " or sifted by the gentle force of gravity through a delicate silken gauze,— producing a much whiter and finer quality of flour ; while in this moist climate, the clammy meal cannot be turned out of the stones so fast or co finely powdered, and it is totally impossible to sift it except by buffet-. ing and powerfully brushing it through a gauze of strong metal wire. Our problem has been, therefore, to imitate the drying action of the French climate. An English engineer, Mr. Bovill, of the firm of Swayne and Bovill, in Abchurch Lane' has accomplished this task ; and we think his invention of such national importance that we give our readers a full explanation of it. Almost every one knows, that in a corn-mill the corn is ground by two circular stones of some four feet diameter : the lower stone is fixed, and the upper stone revolves horizontally close above it, at a high velocity, on a vertical axis. The surface of both stones is chiselled across into sharp-edged grooves. The corn finds its entrance between the stones through a hole in the centre of the upper stone, called the eye.. As the upper stone flies round, the grain is abraded and crushed, and the resulting meal is carried outwards by the centrifugal force. The

path taken by each grain of corn is experimentally discovered by pass- ing through the stones a small lump of French chalk. The chalk describes a volute on the lower stone, of more than one complete revolution, before it falls over the outer edge; and while it makes this journey, the upper stone has travelled nearly a mile and a quarter over its head. The grain is crushed by the first few revolutions of the stone, and a large portion of flour is prcduccd, which has to travel the path described from the centre to the periphery. If the stones were unclogged with flour already made, they would grind much faster and better. But the lagging meal impedes the action of the stones, and muffles and deadens the cutting edges. Thus, meal is seriously injured by the repeated grind- ing which it suffers after it has been pulverized sufficiently. The immense friction which it undergoes at the last stages of its journey—when the surface of the upper stone is chafing over it at from fifteen to eighteen miles an hour—generates so much heat that it rises twenty-five degrees above the temperature of the original grain. As the millers say, the meal is " killed " ; the "heart is taken out of it" ; and it must be stored in sacks for a fortnight, or three weeks, or a month, before it can be dressed into flour and bran. In hot moist weather fermentation is in- evitable, and a deteriorated flour is the result. Mr. Bovill remedies these evils by creating a powerful current of air through the mill-stones : a fan blowing-machine drives the air into the eye of the upper stone, which is so arranged that the powerful current passes from the centre outwards between the grinding surfaces, carrying with it every particle of flour as fast as it is produced from the grain, before it has time to be subjected to the injurious friction and heat of the stones. The idea of driving a stream of air through the stones had been tried already, but bad always failed till Mr. Bovill contrived his patent appa- ratus, which at once drives the air into the eye of the upper stone and sucks it away from the outer edges of both stones. The conjoined effect of the blast and the draught is most striking. As the meal flies out, its place is occupied instantaneously with unground corn, and the grinding accelerated. The stones are worked in closer contact ; and, being freed from the soft medium of flour, the bran is more perfectly cleaned, the unground corn is more rapidly and keenly cut by the clean grooves, the meal is generated more rapidly, and it flows into the bin at a temperature averaging only about ten degrees above that of the original corn. In- stead of needing to be stored a fortnight or a mouth, it is dressed instan- taneously. An endless strap, mounted with metal buckets—like a Per- sian water-wheel—carries up into the silken dressing-maehine the meal as it falls perpendicularly from the stones; and that lighter portion winch is known by the millers as " stive," and is lost in ordinary mills, is wafted away by the draught, and carried into a chamber whose walls are made of a porous fabric which arrests every particle of flour as the air strains through it.

From the operation of the blast of air just described, wheat, however damp and badly harvested, can be ground with as great facility as that in good condition ; the effect being, that the current of air passing between every minute particle of meal in the operation of grinding, carries off all the surplus moisture. To farmers and millers in damp seasons this will be acknowledged as of no trifling importance ; and the millers of Ireland, who have always to kiln-dry their home-grown corn at great expense and loss, have here a means of relief, now that Lord Naas has not succeeded in obtaining "protection" for them.

the produce 2§ per cent more valuable. In this trial about one- sixth more coal was consumed by the engine in driving the new machinery than in driving the old, in consequence of only three pairs of stones being worked on the new plan : the cost of this extra quantity of coal, in the port of London, would be from 2s. W. to 38. 6d.; so the necessary correction will be fully made if we reduce the increased value of the produce from the above estimate of 2-5 per cent to 2.25 per cent, leaving untouched the gain from difference in cost of wheat. On the other hand, we believe this experiment gave a result of increased produce below the practical average of the new mode.

For a more extensive practical experiment, upon 500 quarters with six pairs of stones, employed on both the old and new systems, has been completed this week, in manufacturing biscuit-meal for the Navy : the results of which are as follow.

240000 240,000 , Here is a less loss by 2231 pounds of flour in the process of ananufactdre, and 21 sacks more flour produced, with nearly six tons less coals consumed ; and two men and a boy performed all this in nine days, which required eight men seventeen days to do on the old system,—a saving of at least four. fifthsof the cost of labour. But as no portion of the dust or " save " is lost under the patent system, the apparent waste of 6312 ponruls is en- tirely the result of evaporation produced by the drying effect of cold air upon the meal in the process of manufacture. The highly intelligent and responsible manager of the Government mill rates the grinding power by the new mode at 100 per cent, instead of at 50 per cent, beyond that of the old mode. Each of the stones on the new plan, it will be seen, grinds above 8 bushels per hour instead of 4 bushels, the rate of grinding upon the system hitherto adopted. We think that these figures show that the minute explanations we have given of this invention are not disproportioned to its importance. Mr. Dives, the extensive miller at Battersea has for some time past been working entirely on Mr. Bovill's pkincide with great success, and his flour is preferred by the best London bakers to the finest French marks. Messrs. White, Ponsford, and Co., who have spent about 80,000/. in erect- ing the largest mill in this country on the river-side some two hundred yards below Blaekfriars Bridge, will commence operations shortly ; the whole of the machinery being constructed by Mr. Bovill on his patent system. The scale of its operations and the worth of Mr. Bovill's in- vention may be surmised from our statement that the firm will grind from 7000 to 8001) sacks of flour per week entirely upon his patent.

In additition to these large firms, we believe there are numerous in- tellig,ent millers in various parts of the country who are availing them- selves of the invention.