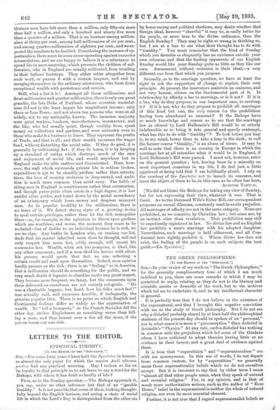 SIR,—For some forty years I have held the Spectator in honour, as almost the only paper for which the maxim Audi alteram partem had any practical meaning. May I reckon so far on its loyalty to that principle as to ask leave to say a word for the Bishops, with whom it has dealt so hardly of late First, as to the Sunday question :—The Bishops approach it, you say, under no other influence but that of an "ignoble timidity." Is it not possible that some of them, looking thought- fully beyond the English horizon, and seeing a state of social life in which the Lord's Day is distinguished from the other six by horse-racing and political elections, may doubt whether that foreign ideal, however "cheerful" it may be, is really better for the people, or more true to the divine ordinance, than the English Sunday? They may be right or wrong in thinking so,. but I am at a loss to see what their thought has to do with "timidity?' You must remember that the kind of Sunday- which you describe so eloquently has no existence outside your own columns, and that the leading opponents of oar English Sanday would like your Sunday quite as little as they like our- own. Amusement without -restraint is their ideal,—a very different one from that which you propose. • Secondly, as to the marriage question, we have at least the. right to ask the supporters of change to explain their own principle. At present, the innovators maintain an ominous, ands not very honest, silence on the fundamental part of it. Is relationship by affinity a bar to marriage, or is it not ? If it is a bar, why do they propose, in one important case, to overleap it ? If it is not, why do they propose to prohibit all marriages of this kind but one, the only reason for the prohibition having been abandoned as unsound ? If the Bishops have- so much knowledge and reason as to see that the marriage law as altered by Lord Dalhousie's Bill would be so utterly indefensible as to bring it into general and speedy contempt,. what has this to do with " timidity " To look before you leap is, to my mind, better than to take a leap in the dark ; to call the former course "timidity," is an abuse of terms. It may be- well to note that there is no country in Europe in which the marriage law at all resembles what it would be in England, if Lord Dalhousie's Bill were passed. I must not, however, enter on the general question ; but, having been- in a minority on most important occasions in my life, I do feel just a little aggrieved at being told that I am habitually afraid. I rely on the courtesy of the Spectator not to launch its censures, and- leave the object of them to be, in this case, as he often has been, AUDITOR TANTTIM.

[We did not blame the Bishops for taking any view of Sunday,. but for not expressing their view, whatever it was. That is. timid. As to the Deceased Wife's Sister Bill, our correspondent proposes an unreal dilemma, constantly used to excite prejudice._ All marriages of affinity are not in the same category. None are- prohibited, as we conceive, by Christiau law ; but some are, by an instinct older than revelation. That prohibition may still be expediently registered in law. No divine law and no English law prohibits a man's marriage with his adopted daughter.. Nevertheless, such marriage is held abhorrent, and all Con- tinental laws rightly prohibit it. Where divine law does not exist, the feeling of the people is on such subjects the best. guide.—En. Spectator.]