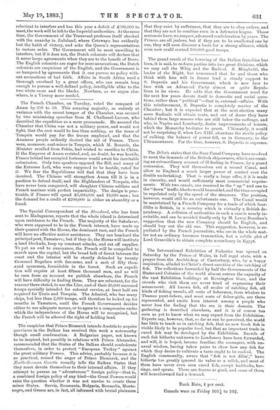 Page 3, 19 May 1883 — The Special Correspondent of the Standard, who has been sent
Close

The Special Correspondent of the Standard, who has been sent

to Madagascar, reports that the whole island is determined upon resistance to the French. The majority of the Sakalavas, who were supposed to be in the French interest, have made up their quarrel with the Hovas, the dominant race, and the French will have no effective native assistance. They can bombard the principal port, Tamatave; but if they do, the Hovas will institute .a land blockade, keep up constant attacks, and cut off supplies. To put an end to annoyance, the French will be compelled to march upon the capital, but the broad belt of forest between the coast and the interior will be stoutly defended by twenty thousand Regulars with fire-arms, and a mob of fifty thou- sand spearmen, formidable in the forest. Such an expedi- tion will require at least fifteen thousand men, and as will be seen from an account we publish elsewhere, the French will have difficulty in finding them. They are reluctant, for the reason there stated, to use the Line, and of their 20,000 seasoned troops specially intended for colonial service, at least half are required for Tunis and Tonquin. The Admiral, who has many ships, but less than 2,000 troops, will therefore be locked up for months in Tamatave, until the French Government decides -either to use adequate means, or to agree to a compromise under which the independence of the Hovas will be recognised, but the French will be allowed the right of holding land.