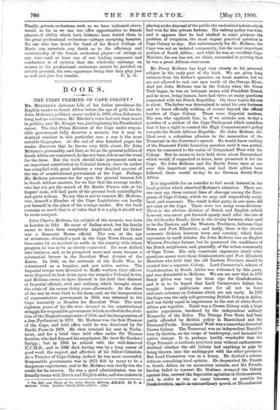 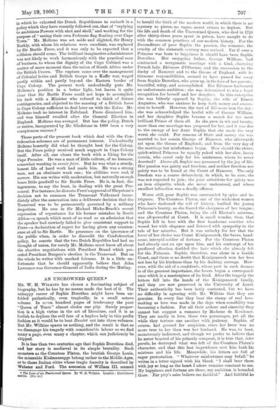 THE FIRST PREMIER OF CAPE COLONY.*

Mn. MOLTENdS elaborate Life of his father introduces the English reader to South Africa before the age of gold, for Sir John Molteno's political career ended in 1882, when Johannes- burg had no existence, Mr. Rhodes's voice had not been heard in politics, and Mr. Kruger was just beginning his Presidential career. The first Prime Minister of the Cape under respon- sible government fully deserves a memoir, but it may be doubted whether in this particular case a son is the most suitable biographer. At the end of nine hundred pages the reader discovers that he knows very little about Sir John Molteno's personality, and that, so far as the general politics of South Africa are concerned, he has not been able to see the wood for the trees. But the work should take permanent rank as an important contribution to Colonial history, since its author has compiled with great industry a very detailed account of the rise of constitutional government at the Cape. Perhaps Mr. Molten() presumes too far upon the general interest felt in South African matters, for we fear that the average reader, who has not got the record of Sir Bartle Frere's rule at his fingers' ends, will find parts of the present book unintelligible and parts tedious. To say this is not to censure Mr. Molten°, who, himself a Member of the Cape Legislature, can hardly put himself in the place of the average reader. But the book contains so much that is of value that it is a pity it should not be more compact.

John Charles Molten°, the subject of the memoir, was born m London in 1814. He came of Italian stock, but his family seems to have been completely Anglicised, and his father was a Somerset House official The son, at the age of seventeen, obtained a post in the Cape Town library, and thus came by an accident to settle in the country with whose progress he was to be so closely connected. He soon drifted into business, and, as he prospered more and more, became a substantial farmer in the Beaufort West district of the Karoo. In 1846, on the outbreak of the Kaffir War, he volunteered as a burgher, and saw active service. The Imperial troops were ill-suited to -Kaffir warfare, their officers were disposed to look down upon the irregular Colonial levies, and Molten() seems to have learned in the field that distrust of Imperial officials, civil and military, which brought about the crisis of his career thirty years afterwards. At the close of the war he went back to his farm,land, on the inauguration of representative government in 1854, was returned to the Cape Assembly as Member for Beaufort West. The next eighteen years of his life were devoted to the constitutional straggle for responsible government;which resulted in the aboli- tion of the illogical compromise of 1854, and the inauguration of a free Parliament in 1872. Mr. Molten° was the first Premier of the Cape, and held office until he was dismissed by Sir Bartle Frere in 1878. He then retained his seat in Parlia- ment, and for a brief time held office under Sir Thomas Scanlen, who bad deposed his supplanter, Mr. (now Sir Gordon) Sprigg ; but in 1883 he retired with the well-deserved S.C.M.G., and in 1886 died, having won by a long career of good work the respect and affection of his fellow-Colonists. As a Premier of Cape Colony, indeed, he was most successful. Responsible government was in 1872 felt by many to be a dangerous experiment, and to Mr. Molten° was chiefly due the credit for its success. He was a good administrator, was on friendly terms with Dutch and English alike, and was zealous in • The htfe and Times of Sir John Charles Molleno, LCJf.Q. By P. A.. Molten°. 2 vols. London : Smith, Elder, and Co. [20s.]

placing at the disposal of the public the undoubted talents which had won for him private fortune. His railway policy was wise, and it appears that he had studied to some purpose the problem of irrigation, the most urgent practical question in Cape Colony to-day. But unfortunately for Mr. Molten°, the Cape was not an isolated community, but the most important portion of South Africa ; and while he was an excellent Cape Minister, his son has not, we think, succeeded in proving that he was a great African statesman.

Mr. Percy Molten° has kept very closely to his personal subject in the early part of the book. We are given long extracts from his father's speeches on local matters, but we are not allowed to cast our eyes north of the Orange River. And yet John Molten° was in the Colony when the Great Trek began, he was on intimate terms with President Brand, and he must, being human, have had views on many questions connected with the Dutch Republics. On these topics his scas. is silent. The father was determined to mind his own business and to know officially nothing of events beyond the official borders of Cape Colony. Those were Imperial matters. His son, who applauds him, is, if we mistake not, to-day a member of a section of the Cape Parliament which considers that it has a right to control the High Commissioner's policy towards the South African Republic. Sir John Molten() dis- liked even a colourless allusion to the annexation of the Transvaal in the Governor's speech. He would know nothing of the Diamond Fields boundary question until it was settled, when he consented to the union of Griqualand West with the Colony. But he seems to have held views about Damaraland which would, if supported at home, have preserved it for the Cape. Sir John Molten° and Sir Bartle Frere were at one over this important question, and had their advice been followed, there would to-day be no German South-West Africa.

It is impossible for an outsider to feel much interest in the local politics which absorbed Molteno's attention. There are, one may say, three natural lines of cleavage among the Euro. peens of Cape Colony, which we may call respectively racial, local, and economic. The result is that party, in our sense, did not exist at the Cape. There were too many cross-divisions There is the obvious division of Dutch and English (which however, was never put forward openly until after the rise of the Afrikander Bond) ; there is the rivalry between what used to be the Eastern and the Western Provinces, between Cape Town and Port Elizabeth ; and lastly, there is the eternal economic division between town and country, which finds expression in tariff debates. Sir John Molten() was an English Western Province farmer, but he possessed the confidence of his Dutch neighbours, and, generally, of the urban community of Cape Town. His only consistent opponents (until wider questions arose) were those Grahamstown and Port Elizabeth Members who held that the old Eastern Province should be created into a separate Colony. Lord Caxnarvon's scheme of Confederation in South Africa was welcomed by this party, and was distasteful to Molten°. We can see now that in 1875 South Africa was very far from ripe for Confederation, and it is to be hoped that Lord Carnarvon's failure has taught home politicians once for all not to force elaborate schemes on Colonies which are not ready. In 1875 the Cape was the only self-governing British Colony in Africa, and was fairly equal in importance to the rest of white South Africa put together. Natal was a Crown Colony with a huge native population, bordered by the independent military Monarchy of the Zulus. The Orange Free State had been justly offended by British policy in Basutoland and the Diamond Fields. Griqualand West was a somewhat disturbed Crown Colony. The Transvaal was an independent Republic torn by faction, on the verge of bankruptcy, and harassed by native risings. It is, perhaps, hardly wonderful that the Cape Premier, a cautious, practical man without enthusiasms, doubted whether the old Colony had anything to gain by being thrown into the melting-pot with the other provinces. But Lord Carnarvon was in a hurry. He drafted a scheme without consulting local opinion. He despatched Mr. Fronde to South Africa on an anomalous mission, and Mr. Fronds, having failed to convert Mr. 31 oltano, stumped the Colony against him, revived the Separatist agitation in Grahamstown, and, in order to win as many interests as possible for Coniederaticaa made an eztraardinary speech at Bloemfonteizt in which he exhorted the Dutch Republicans to embark in a policy which they have recently followed out, that of "replying to ambitious Powers with shot and shell," and working for the purpose of "seeing their own Federate flag floating over Cape Town." Mr. Molteno was set aside and slighted, Sir Henry Barkly, with whom his relations were excellent, was replaced by Sir Bartle Frere, and it was only to be expected that a collision should come. The brilliant imaginative administrator was not likely to work harmoniously with the practical man of business, to whom the dignity of the Cape Cabinet was a matter of more moment than the union of South Africa under the British Crown. The rupture came over the management of Colonial levies and British troops hi a Kaffir war, waged partly within and partly beyond the Eastern border of Cape Colony. The present work undoubtedly puts Mr. Molteno's position in a better light, but leaves it quite clear that Sir Bartle Frere could not hope to accomplish his task with a Minister who refused to think of future contingencies, and objected to the massing of a British force in Cape Colony sufficient to deal later on with the Zulus. Mr. Molteno took no interest in Zulnland. Frere dismissed him, and was himself recalled after the General Election in England. Molteno was avenged. But has the policy, Dutch or native, inaugurated by Mr. Gladstone in 1880 been a very conspicuous success P

Those parts of the present book which deal with the Con- federation schemes are of permanent interest. Undoubtedly Molteno honestly did what he thought best for the Colony. But the Frere policy received much support in Cape Colony itself. After all, one closes the book with a liking for the Cape Premier. He was a man of little culture, of no humour, somewhat wanting in savoir faire. But he was what a sturdy, honest life of hard work had made him. He was a strong man, not an obstinate weak one ; his abilities were real, if narrow. His son writes with moderation, but naturally enough bears little goodwill to Sir Bartle Frere. He is, in fact, dis- ingenuous, to say the least, in dealing with the great Pro- consul. For instance, he distorts Frere's approval of Shepstone's decision not to summon the Transvaal Volksraad imme- diately after the annexation into a deliberate decision that the Transvaal was to be permanently governed by a military despotism. He sees in Sir Michael Hicks-Beach's recent expression of repentance for his former mistakes in South Africa—a speech which most of us read as an admission that the speaker had unwisely failed to give consistent support to Frere—a declaration of regret for having given any counten- ance at all to Sir Bartle. He presumes on the ignorance of the public when, in order to discredit the Confederation policy, he asserts that the two Dutch Republics had had no thought of union, for surely Mr. Molteno must know all about the abortive negotiations with President Brand which pre- ceded President Burgers's election in the Transvaal. But on the whole he writes With marked fairness. It is a little us- fortunate that he should apparently believe that John Lawrence was Governor-General of India during the Mutiny.