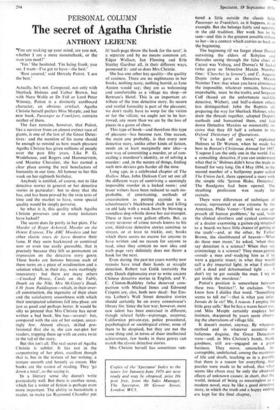 The secret of Agatha Christie

'You are making up your mind, are you not, whether I am a mere mountebank, or the man you need?'

'Rest assured,' said Hercule Poirot. 'I am the best.'

Actually, he's not. Compared, not only with Sherlock Holmes and Father Brown, but with Nero Wolfe or Dr Fell or Lord Peter Wimsey, Poirot is a distinctly cardboard character, an obvious artefact. Agatha Christie herself prefers Miss Marple, and her new book, Passenger to Frankfurt, contains neither of them.

The fact remains, however, that Poirot, like a survivor from an almost extinct race of giants, is one of the last of the Great Detec- tives: and the mention of his name should be enough to remind us how much pleasure Agatha Christie has given millions of people over the past fifty years. Like P. G. Wodehouse, and Rogers and Hammerstein, and Maurice Chevalier, she has earned a clear place among the real benefactors of humanity in our time. All honour to her this week on her eightieth birthday.

So what is it, this quality which Agatha Christie possesses and so many imitators have lacked?

The secret does lie partly in her plots. The Murder of Roger Ackroyd, Murder on the Orient Express, The ABC Murders and her other classic tours de force deserve their fame. If they seem hackneyed or contrived now or even too easily guessable, that is precisely because they left so permanent an impression on the detective story genre. These books are famous because each of them turns on a piece of misdirection and a solution which, in their day, were startlingly innovatory: but there are many others —Crooked House, Cards on the Table, Death on the Nile, Mrs McGinty's Dead, 430 from Paddington—which, in their over- all construction, the ingenuity of their clues and the satisfactory smoothness with which their unexpected solutions fall into place. are just as good and perhaps better. It would be silly to pretend that Mrs Christie has never written a bad book. She has—several: but, compared with the size of her output, amaz- ingly few. Almost always, skilled pro- fessional that she is, she can out-plot her readers, tripping them up with an extra twist in the tail of the story.

But this isn't all. The real secret of Agatha Christie is subtler. It lies not in the carpentering of her plots, excellent though that is, but in the texture of her writing; a texture smooth and homely as cream. Her books are the easiest of reading. They `go down a treat', as the saying is.

In a literary sense she doesn't write particularly well. But there is another sense, which for a writer of fiction is perhaps even more important. The ability to buttonhole a reader, to make (as Raymond Chandler put it) 'each page throw the hook for the next', is a separate and by no means common art. Edgar Wallace, Ian Fleming and Erle Stanley Gardner all, in their different ways, possessed it: and so does Mrs Christie.

She has one other key quality—the quality of cosiness. There are no nightmares in her books, nothing nasty, nothing horrid, as Jane Austen would say; they are as welcoming and comfortable as a village tea shop—or Bertram's Hotel. This is an important at- tribute of the true detective story. Its secure and restful formality is part of the pleasure; we don't really have to weep for the victim or for the villain; we ought not to be har- rowed, any more than we are by the loss of pieces in a game of chess.

This type of book—and therefore this type of pleasure—has become rare. One reason, the main one probably, is that every new detective story, unlike other kinds of fiction, needs an at least marginally new idea—a new way of committing a murder, or of con- cealing a murderer's identity, or of solving a murder: and, in the nature of things, finding such new devices gets harder all the time.

Long ago, in a celebrated chapter of The Hollow Man, John Dickson Carr set out all the different ways of contriving a seemingly impossible murder in a locked room : and lesser writers have been reduced to such im- probable, if entertaining, methods of assassination as putting cyanide in a schoolmaster's blackboard chalk and killing an old lady with a weak heart by blowing a soundless dog-whistle down her ear-trumpet. These at least were gallant efforts. But, as every reviewer of crime novels knows to his cost, third-rate detective stories continue to stream, or at least to trickle, out; books which there seems no excuse for anyone to have written and no reason for anyone to read, since they contain no new idea and each page very definitely does not throw a hook for the next.

Even during the past ten years worthy new recruits have tried their hands at straight detection. Robert van Gulik (certainly the only Dutch diplomatist ever to write ancient Chinese detective stories in English, and V. C. Clinton-Baddeley (who deserved com- parison with Michael Innes and Edmund Crispin) are, alas, both now dead : but Em- ma Lathen's Wall Street detective stories should certainly be on every connoisseur's library list. Since the last war, however, most new talent has been exercised in different, though related fields—espionage, suspense, Californian private-eye, police procedural, psychological or sociological crime; none of them to be despised, but they are not the same thing and, in terms of sheer intellectual achievement, few books in these genres can match the classic detective stories.

Mrs Christie herself has sometimes ven-

tured a little outside the classic field; Passenger to Frankfurt, as it happens, is an example. But she belongs fairly and squarely in the old tradition. Her work has to be seen—and this is the greatest possible tribute to her—in a context which carries us back to the beginning.

The beginning (if we forget about Daniel outwitting the elders of Babylon and Hercules seeing through the false clues of Cacus) was Vidocq, and Dumas's M Jackal (who gave us Detective Maxim Number

Dupin (who gave us Detective Maxim Number Two: that when you have eliminated the impossible, whatever remains, however improbable, must be the truth), and Sergeant Cuff (based on the unfortunate real-life detective, Wicher), and half-a-dozen others less distinguished; John the Baptists all, preparing the way for Sherlock Holmes, who

drew the threads together, adopted Dupirr's methods and humanised them, and laid down Detective Maxims so memorably in- cisive that they fill half a column in the Oxford Dictionary of Quotations.

`I've a trade of my own,' explained Holmes to Dr Watson, when he made his

bow in Beeton's Christmas Annual for 1887.

`I supose I am the only one in the world. I'm a consulting detective, if you can understand what that is.' Holmes didn't have the trade to

himself for very long. On 4 May 1894, in the second number of a halfpenny paper called The Union Jack, there appeared a story with the simple title •`Sexton Blake, Detective'. The floodgates had been opened. The sleuthing profession was ready for recruits.

There were differences of technique. of course, represented at one extreme by the American, Philo Vance—'Until we can ap-

proach all human problems,' he said, 'with the clinical aloofness and cynical contempt

of a doctor examining a guinea-pig strapped to a board, we have little chance of getting at the truth'—and, at the other, by Father

do these men mean,' he asked, 'when they say detection is a science? When they say

criminology is a science? They mean getting outside a man and • studying him as if he were a gigantic insect; in what they would

call a dry impartial light; in what I should call a dead and dehumanised light . . . I don't try to get outside the man. I try to get inside the murderer.'

Poirot's position is somewhere between these two. 'Instinct!', he exclaims. 'You

know how I dislike that word. "Something

seems to tell me"—that is what you infer. Jamais de la vie! Me, I reason. I employ the little grey cells.' But he has a warm heart too. and Miss Marple certainly employs her instincts, sharpened by years spent observ- ing the aberrations of village life.

It doesn't matter, anyway. By whatever method and in whatever eccentric or ludicrous disguise, the Great Detectives were—and, in Mrs Christie's hands, thank goodness, still are—engaged on a great

business. They move, untouched, in- corruptible, undefeated, among the mysteries of life and death, teaching us in a parable that there is a reason for everything, that puzzles were made to be solved, that what seems like chaos may be only the observed effects of unknown causes; in short, that the world, instead of being as meaningless as a modern novel, may be like a good detective story, in which the truth and a happy ending are kept for the final chapter,