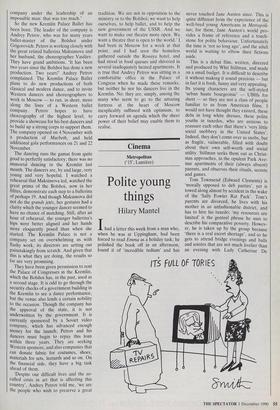 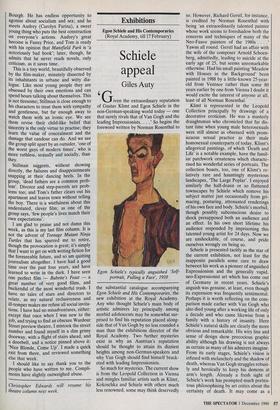 Ihad a letter this week from a man who, when he was at Uppingham, had been forced to read Emma as a holiday task; he polished the book off in an afternoon, found it of 'incredible tedium' and has never touched Jane Austen since. This is quite different from the experience of the well-bred young Americans in Metropoli- tan; for them, Jane Austen's world pro- vides a frame of reference and a touch- stone for polite behaviour. Unfortunately the time is 'not so long ago', and the adult world is waiting to elbow their fictions aside.

This is a debut film, written, directed and produced by Whit Stillman, and made on a small budget. It is difficult to describe it without making it sound precious — but in fact it is fresh, funny and very appealing. Its young characters are the self-styled 'urban haute bourgeoisie' — UBHs for short — so they are not a class of people familiar to us from American films. I would not have thought they existed, these debs in long white dresses, these polite youths in tuxedos, who are anxious to reassure each other that there's 'very little social snobbery in the United States'. Indeed, they don't come over as snobs, but as fragile, vulnerable, filled with doubt about their own self-worth and social utility. Stillman seeks them out as Christ- mas approaches, in the opulent Park Ave- nue apartments of their (always absent) parents, and observes their rituals, secrets and games.

Tom Townsend (Edward Clements) is 'morally opposed to deb parties', yet is towed along almost by accident in the wake of the 'Sally Fowler Rat Pack'. Tom's parents are divorced, he lives with his mother in an unfashionable district, and has to hire his tuxedo; 'my resources are limited' is the genteel phrase he uses to describe his comparative poverty. Howev- er, he is taken up by the group because 'there is a real escort shortage', and so he gets to attend bridge evenings and balls and soirees that are not much livelier than an evening with Lady Catherine De Bourgh. He has endless opportunity to agonise about socialism and sex; and he meets Audrey (Carolyn Farina), a sweet young thing who puts the best construction on everyone's actions. Audrey's great heroine is Fanny Price, and Tom is ready with his opinion that Mansfield Park is 'a notoriously bad book'; later, though, he admits that he never reads novels, only criticism, as it saves time.

This is a tiny world, beautifully observed by the film-maker, minutely dissected by its inhabitants in urbane and witty dia- logue. Like most young people they are obsessed by their own emotions and can spend hours talking about themselves. This is not tiresome; Stillman is close enough to his characters to treat them with sympathy and gentleness, but far enough away to watch them with an ironic eye. We see them revise their child-like belief that sincerity is the only virtue to practise; they learn the value of concealment and the damage that candour can do. And we see the group split apart by an outsider, 'one of the worst guys of modern times', who is more ruthless, sexually and socially, than they.

Stillman suggests, without showing directly, the failures and disappointments snapping at their dancing heels. In the group, 'dead fathers are a common prob- lem'. Divorce and step-parents are prob- lems too; and Tom's father clears out his apartment and leaves town without telling the boy. There is a wistfulness about this understated, clever film; as one of the group says, `few people's lives match their own expectations'. I am glad to praise and not damn this week, as this is my last film column. It is not the advent of Teenage Mutant Ninja Turtles that has spurred me to retire, though the provocation is great; it's simply that I want to get on with writing fiction for the foreseeable future, and so am quitting journalism altogether. I have had a good time over the past four years, and have learned to write in the dark. I have seen one perfect film — Babette's Feast — a great number of very good films, and bucketsful of the most wonderful trash. I have no tales of stars and directors to relate, as my natural reclusiveness and ill-temper makes me refuse all social invita- tions. I have had no misadventures, either: except that once when I was new to the job, and trying to find an obscure Wardour Street preview theatre, I mistook the street number and found myself in a dim grimy doorway, with a flight of stairs ahead, and a doorbell, and a notice pinned above it: `Nice Blonde, Come Up'. I made a quick exit from there, and reviewed something else that week.

I should like to say thank you to the people who have written to me. Compli- ments have slightly outweighed abuse.