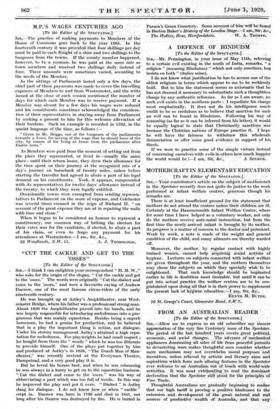 the Editor of the SPECTATOR.] S1R,--I think I can enlighten your correspondent " H. M. W.," who asks for the origin of the slogan, " Cut the cackle and get to the 'osses." The words were originally Cut the dialect and come to the 'oases," and were a favourite saying of Andrew Ducrow, one of the most famous circus-riders of the early nineteenth century.

He was brought up at Astley's Amphitheatre, near West- minster Bridge, where his father was a professional strong man. About 1820 the Amphitheatre passed into his hands, and he was largely responsible for introducing melodramas into a pro- gramme that was mainly equestrian. Besides being a superb horseman, he had a genius for production, and he believed that in a play the important thing is action, not dialogue. Under his stormy management Astley's attained a high repu- tation for melodrama. For playwrights he had small respect ; he bought from them the "words "-which he was too illiterate to provide himself. One of the plays put together by him and produced at Astley's in 1838, "The Dumb Man of Man- chester," was recently revived at the Everyman Theatre, Hampstead, and a very good play it is. •

But he loved his horses best, and when he was rehearsing he was always in a hurry to get on to the equestrian business. "Cut the dialect and come to the 'osses " was his way of abbreviating a part which was too full of words. In this way he improved the play and got it Over. " Dialect " is Astley slang for dialogue. I do not know .how or when " cackle ' crept in. Duerow was born in 1793 and died in 1841, not long after his theatre-was destroyed by fire. He is buried in Parson's Green Cethetery. Some account of him will be found in Barton Baker's History of the Londim am,; Sir, &c., The Hollies, Ross, Herefordshire. W. A. THORPE.