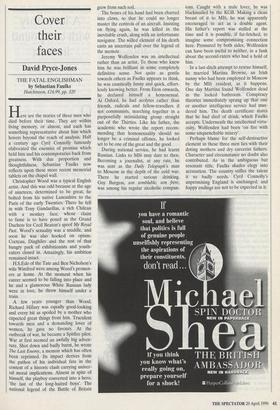 THE FATAL ENGLISHMAN by Sebastian Faulks Hutchinson, f16.99, pp. 320 Here are the stories of three men who died before their time. They are within living memory, or almost, and each has something representative about him which hovers beyond the reach of analysis. Half a century ago Cyril Connolly famously elaborated the enemies of promise which held him and his contemporaries back from greatness. With due proportion and thoughtfulness, Sebastian Faulks now reflects upon these more recent memorial tablets on the chapel wall.

Christopher Wood was a typical English artist. And this was odd because at the age of nineteen, determined to be great, he bolted from his native Lancashire to the Paris of the early Twenties: There he fell in with Tony Gandarillas, a rich Chilean with a monkey face, whose claim to fame is to have posed as the Grand Duchess for Cecil Beaton's spoof My Royal Past. Wood's sexuality was a muddle, and soon he was also hooked on opium. Cocteau, Diaghilev and the rest of that hungry pack of exhibitionists and youth- eaters closed in. Amazingly, his ambition remained intact.

H.S.Ede of the Tate and Ben Nicholson's wife Winifred were among Wood's promot- ers at home. At the moment when his career seemed to be falling into place and he and a glamorous White Russian lady were in love, he threw himself under a train.

A few years younger than Wood, Richard Hillary was equally good-looking and every bit as spoiled by a mother who expected great things from him. Truculent towards men and a demanding lover of women, he gave no favours. At the outbreak of war, he became a Spitfire pilot. War at first seemed an awfully big adven- ture. Shot down and badly burnt, he wrote The Last Enemy, a memoir which has often been reprinted. Its impact derives from the pathos of his individual fate in the context of a historic clash carrying univer- sal moral implications. Almost in spite of himself, the playboy converted into a hero, `the last of the long-haired boys'. The national legend of the Battle of Britain grew from such soil.

The bones of his hand had been charred into claws, so that he could no longer master the controls of an aircraft. Insisting on flying again, he was killed in the inevitable crash, along with an unfortunate navigator. The willed element of his death casts an uncertain pall over the legend of the memoir.

Jeremy Wolfenden was an intellectual rather than an artist. To those who knew him he was brilliant in some completely definitive sense. Not quite as gentle towards others as Faulks appears to think, he was caustically funny and quick, effort- lessly knowing better. From Eton onwards, he declared himself a homosexual. At Oxford, he had acolytes rather than friends, radicals and fellow-travellers if not communists, marching together in a purposefully intimidating group straight out of the Thirties. Like his father, the academic who wrote the report recom- mending that homosexuality should no longer be a criminal offence, he looked set to be one of the great and the good.

During national service, he had learnt Russian. Links to MI6 may date to then. Becoming a journalist, at any rate, he was sent as the Daily Telegraph's man to Moscow in the depth of the cold war. There he started serious drinking. Guy Burgess, son semblable, son frere, was among his regular alcoholic compan- ions. Caught with a male lover, he was blackmailed by the KGB. Making a clean breast of it to MI6, he was apparently encouraged to act as a double agent. His father's report was stalled at the time and it is possible, if far-fetched, to imagine some compromising connection here. Pressured by both sides, Wolfenden can have been useful to neither, in a funk about the second-raters who had a hold of him.

In a last-ditch attempt to rescue himself, he married Martina Browne, an Irish nanny who had been employed in Moscow by the MI6 resident, as it happens. One day Martina found Wolfenden dead in the locked bathroom. Conspiracy theories immediately sprang up that one or another intelligence service had mur- dered him. The death certificate states that he had died of drink, which Faulks accepts. Underneath the intellectual virtu- osity, Wolfenden had been 'on fire with some unquenchable misery'.

Perhaps blame for the self-destructive element in these three men lies with their doting mothers and dry careerist fathers. Character and circumstance no doubt also contributed. As in the ambiguous but resonant title, Faulks shades elegy into accusation. The country stifles the talent it so badly needs. Cyril Connolly's unpromising England is unchanged, and happy endings are not to be expected in it.