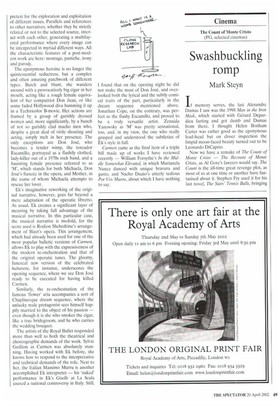 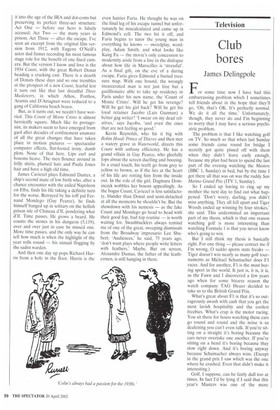 If memory serves, the last Alexandre Dumas I saw was the 1998 Man in the Iron Mask, which started with Gerard Depardieu farting and got dumb and Dumas from there. I thought Helen Bonham Carter was rather good as the eponymous lead-head but on closer inspection the limpid moon-faced beauty turned out to be Leonardo DiCaprio.

Now we have a remake of The Count of Monte Cristo — The Recount of Monte Cristo, as Al Gore's lawyers would say. The Count is the all-time great revenge plot, as most of us at one time or another have fantasised about it. Stephen Fry used it for his last novel, The Stars' Tennis Balls, bringing it into the age of the IRA and dot-corns but preserving its perfect three-act structure: Act One — before our hero is falsely accused; Act Two — the many years in prison; Act Three — after the escape. I've seen an excerpt from the original film version from 1912, with Eugene O'Neill's actor dad James recording his most famous stage role for the benefit of one fixed camera. But the version I know and love is the 1934 Count, with the great Robert Donat heading a cracking cast. There is a dearth of Donats these days and so one trembles at the prospect of a new Count, fearful lest it turn out like that last dreadful Three Musketeers, in which Athos, Porthos, Aramis and D'Artagnan were reduced to a gang of California beach bozos.

But, as it turns out, we needn't have worried. This Count of Monte Cristo is almost heroically square. Much like its protagonist, its makers seem to have emerged from gaol after decades of confinement unaware of all the great changes that have taken place in motion pictures — spectacular computer effects, flat-footed irony, dumb plots. None of that here. Lips curl and bosoms heave. The men flounce around in frilly shirts, plumed hats and Paula Jones hair and have a high old time.

James Caviezel plays Edmond Dantes, a ship's second mate of low birth who, after a chance encounter with the exiled Napoleon on Elba, finds his life taking a definite turn for the worse. Betrayed by his toff pal Fernand Mondego (Guy Pearce), he finds himself banged up in solitary on the hellish prison isle of Chateau d'If, pondering what d'If. Time passes. He grows a beard. He counts the stones in his dungeon (5,119), over and over just in case he missed one. More time passes, and the only way he can tell how much is when the highlight of the year rolls round — his annual flogging by the sadist warden.

And then one day up pops Richard Harris from a hole in the floor. Harris is the

even hairier Faria. He thought he was on the final leg of his escape tunnel but unfortunately he miscalculated and came up in Edmond's cell. The two hit it off, and Faria begins to tutor the young man in everything he knows — swordplay, wordplay, Adam Smith, and what looks like Kung Fu — the movie's only concession to modernity aside from a line in the dialogue about how life in Marseilles is 'stressful'. As a final gift, on the eve of a daring escape, Faria gives Edmond a buried treasure map. With one bound, the wrongly incarcerated man is not just free but a gazillionaire able to take up residency in Paris under his new name, the 'Count of Monte Cristo'. Will he get his revenge? Will he get his girl back? Will he get his loyal retainer Jacob° (Luis Guzman) a better gag writer? 'I swear on my dead relatives,' says Jacob°, 'and even the ones that are not feeling so good.'

Kevin Reynolds, who hit it big with Robin Hood: Prince of Thieves and then met a watery grave in Waterworld, directs this Count with unfussy efficiency. He has a grand villain in Guy Pearce, who gleefully fops about the screen duelling and boozing. In a cruel touch, his teeth go from grey to yellow to brown, as if the lies at the heart of his life are rotting him from the inside out. In the role of the girl. Dagmara Dominczyk wobbles her bosom appealingly. As the bogus Count, Caviezel is less satisfactory, blander than Donat and semi-detached at all the moments he shouldn't be. But the showdown with his nemesis — as the fake Count and Mondego go head to head with their good fop, bad fop routine — is worth waiting for. Swashbucklers always remind me of one of the great, sweeping dismissals from the Broadway impresario Lee Shubert: 'Audiences,' he said, 75 years ago, 'don't want plays where people write letters with feathers.' Maybe. But on screen, Alexandre Dumas, the father of the feathermen, is still hanging in there.