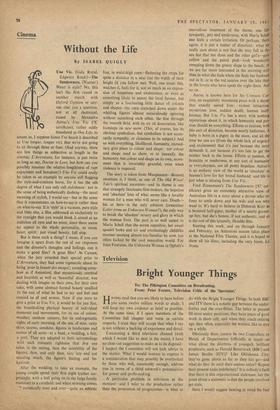 By ISABEL QUIGLY Une Vie. (Gala Royal, Edgware Road.)—The Sundowners. (Warner.) WHAT Is style? No, this isn't the first round in another match with Oxford Opinion or any- one else; just a question, not at all rhetorical, raised by Alexandre Astruc's Une Vie (`X' certificate), rather oddly translated as One Life, to assure us, I suppose (since I've heard it described as Une longue, longue vie), that we're not going to sit through three or four. (And anyway, there are few things as subjective as length in the cinema; L'Avventura, for instance, is just twice as long as say, Doctor in Love, but how can you possibly measure the relative lengthiness of rapt enjoyment and boredom?) Une Vie could really be taken as an example by anyone still flogging the style-and-contents horse, for it has the nth degree of what I can only call stylishness: not in the sense of being aesthetically dashing—the usual meaning of stylish, I would say—but in the sense that it concentrates on how-to-say-it rather than on what-to-say. It is 'style' in a vacuum, pure style and little else, a film addressed so exclusively to the eyesight that you would think it aimed at an audience all eyes and no more, since there seems • no appeal to the whole personality, to mind, heart, spirit: just visual beauty, full stop.

But is there such a thing? I mean, if you can imagine it apart from the rest of our responses and the director's thoughts and feelings, can it make a good film? A great film? At Cannes, when the jury awarded their special prize to L'Avventura, they had some rigmarole about its being 'pour la beaute des images'; sounding some- how as if Antonioni, that mysteriously cerebral and heartfelt as well as `beautiful' director, was dealing with images on their own, for their own sake, with some abstract formal beauty unallied to the rest of what he had to say and feel and remind us of and arouse. Now if one were to give a prize to Une Vie, it would be for just that, the breathtaking physical beauty of individual moments and movements, for its use of colour, weather, outdoor scenery, for its unforgettable sights of early morning, of the sea, of mist, rainy skies, storms, sunshine, figures in landscapes and scenes of all sorts—at a hunt, a wedding, a fair, a port. They are adapted to their surroundings with such romantic rightness that first one takes in the setting, then the suitability of the figures, then, and only then, very late and not minding much, the figure's feeling and be- haviour.

After the wedding, to take an example, the young couple spend their first night (rather sur- prisingly, with a ball going on in the large family mansion) in a cornfield, and when morning comes " ecstatically over and over—quite an athletic feat, in waist-high corn—flattening the crops for quite a distance in a neat line the width of their height (if you follow me). Well, one treats this, watches it, feels for it, not so much as an expres- sion of happiness and exuberance, or even as something likely to annoy the local farmer, but simply as a fascinating little dance of colours and shapes—the corn crunched down under the whirling figures almost miraculously spinning without squashing each other, the line through the smooth field, with its air of desecration, like footsteps on new snow. (This, of course, has its obvious symbolism, but symbolism is not neces- sarily sympathy, or closeness to its subject.) And so with everything, likelihood, humanity, immed- iacy give place to colour and shape: not colour and shape used to show, or to intensify, the humanity, but colour and shape on its own, move- ment that is invariably graceful, even when violence is required.

The story is taken from Maupassant—Bennett mentions it, I think, as one of The Old Wives' Tale's spiritual ancestors—and its theme is one that strangely fascinates film-makers, the hopeless and 'absolute' love of what seems like a lovable woman for a man who will never care. Death— his or hers—is the only solution (remember Letter from an Unknown Woman?), the only way to break the `absolute' misery and glory in which the woman lives. The part is so well suited to Maria Schell that she seems repetitive, her sweet spaniel looks and air and everlastingly childlike manner seeming almost too familiar by now, too often kicked by the cool masculine world. For Joan Fontaine, the Unknown Woman in Ophuls's marvellous treatment of the theme, one felt sympathy, pity and tenderness; with Maria Schell one feels a certain irritation. Or perhaps, there again, it is just a matter of direction : what we really care about is not that she may fall in the sea but that her dress and the other girl's—pale yellow and the palest pink—look wonderful sweeping down the grassy slope to the beach; or we are far more interested in the morning mkt than in what she feels when she finds her husband out in it; or in the red sunrise over the lake than in the lovers who have spent the night there. And so on.

Astruc is known here for his Crimson Cur• lain, an exquisitely mannered piece with a theme that exactly suited him: violent attraction, mysterious love, sudden death, human indif- ference. But Une Vie has a story with nothing mysterious about it, in which humanity and pas- sion should be everything. Efforts at realism, with this sort of direction, become nearly ludicrous. A baby is born in a pigsty in the snow, and all the time we can see (from the whole lack of urgency and excitement) that it's just' because the story demands it, not because it's too late to get the mother back to the house. Efforts at passion, at brutality or tenderness, at any sort of humanity or everydayness, are all pretty hopeless. Astruc's is an ;esthetic view of the world as `absolute' as Jeanne's love for her brutal husband; and life is just what is missing from Une Vie.

Fred Zinnemann's The Sundowners ('U' cer- tificate) gives an extremely attractive view of Australian life in a story about a drover who re- fuses to settle down and his wife and son who want to. It's hard to believe in Deborah Kerr as a bronzed half-gipsy, mother of a nearly grown- up boy, but she's honest, if not authentic, and so is the rest of this leisurely, likeable film.

Starting this week, and on through January and February, an Antonioni season takes place at the National Film Theatre, and it is hoped to show all his films, including the very latest, La Notte.