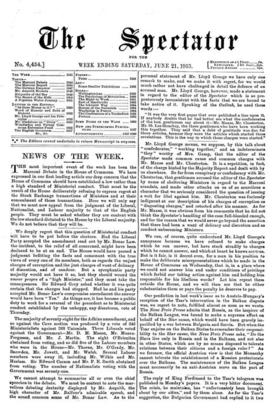 Mr. Lloyd George means, we suppose, by this talk about

" confederates," " working together," and an indeterminate " they " worthy of Mrs. Gamp, that the editor of the Spectator made common cause and common charges with Mr. Maxse and Mr. Chesterton. It is a repetition, in fact, of the charge hinted by the Majority Report and dealt with by us elsewhere. So far from conspiracy or confederacy with Mr. Chesterton, that gentleman accused the editor of the Spectator by name of sheltering Ministers in regard to the Marconi scandals, and made other attacks on us of so scurrilous a character that we seriously considered the question of issuing a writ for libel against him. Mr. Chesterton was furiously indignant at our description of his charges of corruption as " disgusting charges," and retorted after his manner. As for Mr. Masse, it was obvious from his comments that he did not think the Spectator's handling of the case full-blooded enough, and for the reason that we would never go beyond the assertion that there had been a want of delicacy and discretion and so conduct unbecoming Ministers.