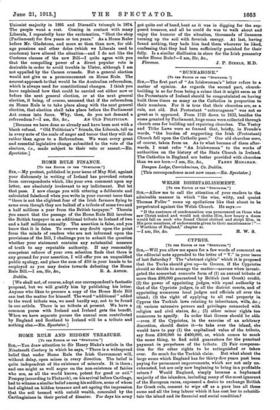 Sin,—The first part of "An Irishwoman's" letter refers to a matter of opinion. As regards the second part, church- building is so far from being a crime that it might seem as if the Protestants of Ireland should be congratulated on having built three times as many as the Catholics in proportion to their numbers. For it is true that their churches are, as a rule, not old. But Protestant " extravagance " was not so great as it appeared. From 1725 down to 1833, besides the sums granted by Parliament, huge sums were collected through church cess for building and repairing churches. The Vestry and Tithe Laws were so framed that, briefly, in Froude's words, " the burden of supporting the Irish (Protestant) Church fell upon the Catholic poor." Our old churches were, of course, taken from us. As to what became of them after- wards, I must refer "An Irishwoman" to the works of authorities on the history of the State Church in Ireland. The Catholics in England are better provided with churches [This correspondence must now cease.—En. Spectator.]