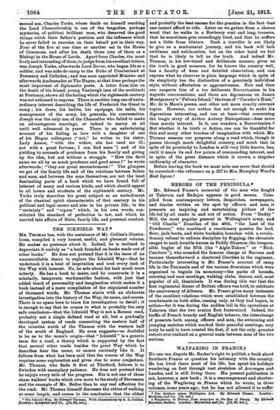 2111i. THOMAS has, with the assistance of Mr. Collins's illustra- tions, compiled a very honest, useful, and pleasant volume. He makes no pretence about it. Indeed, he is inclined to depreciate it unduly as " a book founded on books made out of other books." He does not pretend that it is the issue of an uncontrollable desire to explore the Icknield Way—that be undertook it in a heat of inspiration and trod every inch of the Way with interest. No, he sets about his task much more soberly. He has a book to make, and he constructs it in a scholarly, temperate, workmanlike fashion, with just that added touch of personality and imagination which makes it a book instead of a mere compilation of the stipulated number of thousand words. Mr. Thomas starts with an elaborate investigation into the history of the Way, its name, and course. There is no space here to trace his investigation in detail ; it is enough to say that he comes to what is probably the only safe conclusion—that the Icknield Way is not a Roman road, probably not a single defined road at all,. but a gradually developed system of roads connecting the eastern half of the counties north of the Thames with the western half of the south of England. He even suggests—so doubtful is he as to the name's origin—that " Icknield " is a generic term for a road, a theory which is supported by the fact that several other roads besides the great Way which he describes bear the name, or names curiously like it. It follows from what has been said that the course of the Way requires some exploration and gives rise to some conjecture. Mr. Thomas, who finds it first at Thetford, follows it to Swindon with exemplary patience. He does not pretend that he enjoys every mile of the progress. His is not one of those sham walkers' books which owe more to the study of Stevenson and the example of Mr. Belloc than to any real affection for the road. Mr. Thomas himself discusses the ethics of walking at some length, and comes to the conclusion that the oldest .London; Constable and Co, L'78,fid,, net.] _ garrison Barker, London ; gaemillan and Co, 174, 6(1, set.].

and probably the best excuse for the practice is the fact that one cannot afford to ride. Later on we gather from a chance word that he walks in a Burberry coat and long trousers, that he sometimes gets exceedingly tired, and that he suffers not a little from blisters. Such a traveller is not likely to give us a sentimental journey, and his book will lack swiftness and exhilaration, but on the other hand we feel that he is likely to tell us the truth. And indeed Mr_ Thomas, in his low-toned and deliberate manner, gives us the truth in good measure, for he knows the country well, has a faculty of keen and detailed observation, and cam express what he observes in plain language which in spite of its simplicity has the distinction of a genuinely individual style, without affectation or aggressiveness. Now and then one suspects him of a too deliberate Borrovianism in his wayside conversations, and there are digressions on James Montgomery's "Pelican Island," the tune of " Caradoc's Hunt," Mr. de la Mare's poems, and other not more exactly relevant topics. However, our author has art enough to make his digressions interesting, and one at least—that concerning the tragic story of Arthur Aubrey Bishopstone—does more than merely interest. Is it, one wonders, a Borrovianism But whether it be truth or fiction, one can be thankful for- this and many other touches of imagination with which Mr. Thomas seasons our progress along a road which, though it passes through much delightful country, and much that in spite of its proximity to London is still very little known, has until it nears its end few points of commanding interest, and in spite of the great distance which it covers, a singular uniformity of character.

Before leaving the book we must note one error that should be corrected—the reference on p. 227 to Mrs. Humphry Ward's East Lynne !