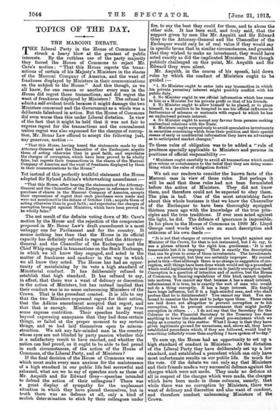 Yet instead of this perfectly truthful statement the House adopted Sir Ryland Adkins's whitewashing amendment :— " That this House, after hearing the statements of the Attorney- General and the Chancellor of the Exchequer in reference to their purchase of shares in the Marconi Company of America, accepts their expressions of regret that such purchases were made and were not mentioned in the debate of October 11th ; acquits them of acting otherwise than in good faith; and reprobates the charges of corruption brought against Ministers, which have been proved to be wholly false."

The net result of the definite voting down of Mr. Cave's motion by the House and the rejection of the compromise proposed in Mr. Bonar Law's draft amendment is a most unhappy one for Parliament and for the country. It means nothing less than that the House in its official capacity has definitely refused to regret that the Attorney- General and the Chancellor of the Exchequer and the Chief Whip engaged in transactions on the Stock Exchange, in which we all know they engaged, and acted in the matter of frankness and candour in the way in which we all know they acted. The House has had an oppor- tunity of maintaining by its vote a high standard of Ministerial conduct. It has deliberately refused to establish that high standard. It has refused to say, in effect, that there was a want of delicacy or discretion in the action of Ministers, but has instead implied that their conduct was in no sense unbecoming Ministers of the Crown. That is the precedent created. It is idle to say that the two Ministers expressed regret for their action, that the Adkins amendment accepted that regret, and that that is enough. Ministers did not in any true sense express contrition. Their speeches hardly went beyond expressing annoyance that they had done certain things, or failed at the proper moment to say certain things, and so had laid themselves open to miscon- struction. We ask any fair-minded man in the country whose eyes are not blinded by party passion whether this is a satisfactory result to have reached, and whether the nation can feel proud, as it ought to be able to feel proud in such circumstances, of the action of the House of Commons, of the Liberal Party, and of Ministers ? If the final decision of the House of Commons was one which must make every man anxious for the maintenance of a high standard in our public life feel sorrowful and ashamed, what are we to say of speeches such as those of Mr. Asquith and Sir Edward Grey—speeches intended to defend the action of their colleagues ? There was a great display of sympathy for the unpleasant situation in which they have placed themselves, but in truth there was no defence at all, only a kind of mulish determination to stick by their colleagues under fire, to say the best they could for them, and to abuse the other side. It has been said, and truly said, that the support given by men like Mr. Asquith and Sir Edward Grey to the Attorney-General and the Chancellor of the Exchequer would only be of real value if they would say in specific terms that in similar circumstances, and granted that they wished to make an investment, they would have acted exactly as did the implicated Ministers. But though publicly challenged on this point, Mr. Asquith and Sir Edward Grey were silent. Mr. Asquith, in the course of his speech, laid down rules by which the conduct of Ministers ought to be guided :- " 1. No Minister ought to enter into any transaction in which his private pecuniary interest might possibly conflict with his public duty.

4. No Minister ought to accept any favour from persons seeking contractual relations with the State.

5. Ministers ought scrupulously to avoid speculative investments in securities concerning which from their position and their special means of early or confidential information they have an advantage as to anticipated market changes."

To these rules of obligation was to be added a " rule of prudence specially applicable to Ministers and persons in positions of official responsibility :-- "Ministers ought carefully to avoid all transactions which could give colour or countenance to the belief that they are doing some- thing which the rules of obligation forbid."

We ask our readers to consider the known facts of the Marconi case in view of these rules. But perhaps it will be said that these rules had not been formulated before the action of Ministers. They did not know them, and therefore could not be expected to obey them. The plea is bad. One of the most astonishing facts about this whole business is that we know the Chancellor of the Exchequer to have been thoroughly equipped thirteen years ago with the knowledge of the true prin- ciples and the true traditions. If ever man acted against the light, he did. The defence of ignorance is impossible. In his place in the House of Commons in 1900 Mr. Lloyd George used words which are an exact description and criticism of his own deeds :— "It is not that charges of corruption are brought against any Minister of the Crown, for that is not insinuated, but I do say, to use a phrase uttered by the right hon. gentleman : 'It is not treasonable but it is improper.' That is exactly the description that can be given to some of these investments. The investments . . are not corrupt, but they are certainly improper. My second point is this—that although there is no charge or suggestion of cor- ruption, still things have been done which would set up a precedent which could legitimately be used later on to justify corruption itself. Corruption is a question of intention and of motive, but the House of Commons, in framing regulations of this kind, cannot inquire into motives. You cannot say that because A has a small interest, infinitesimal it is true, he is exactly the sort of man who would not do a thing corruptly. B has a large interest. His family have huge influence, but B is a high-minded man, and who shall profess that he is disinterested? You cannot say that. You are bound to examine the facts and to judge upon them. These rules are laid down not altogether to prevent corruption or to hit corruption, but to prevent circumstances that might justify corruption in others. . . . I do not say that the Secretary for the Colonies or the Financial Secretary to the Treasury has done anything to lower the standard of proud pre-eminence which we enjoy as a country in this matter. What I do say is that they have given legitimate ground for uneasiness, and, above all, they have established precedents which, if they are followed, would lead to something infinitely worse than anything I have spoken of to-day."

To sum up, the House had an opportunity to set up a high standard of conduct in Ministers. At the dictation of the Liberal Party they have deliberately set up a low standard, and established a precedent which can only have most unfortunate results on our public life. So much for the vote. Of the debate we can only say that Ministers and their friends made a very successful defence against the charges which were not made. They made no defence at all in respect of the charges which were made, the charges which have been made in these columns, namely, that while there was no corruption by Ministers, there was want of delicacy and discretion and also want of candour, and therefore conduct unbecoming Ministers of the Crown.