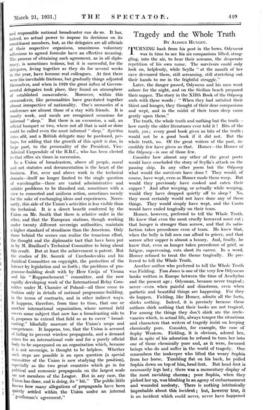 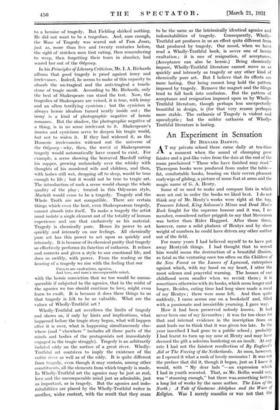 Tragedy and the Whole Truth

TURNING back from his post in the bows, Odysseus was in time to see his six companions lifted, strug- gling, into the air, to hear their screams, the desperate repetition of his own name. The survivors could only look on, helplessly, while Scylla " at the mouth of her cave devoured them, still screaming, still stretching out their hands to me in the frightful struggle."

Later, the danger passed, Odysseus and his men went ashore for the night, and on the Sicilian beach prepared their supper. The story in the XIIth Book of the Odyssey ends with these words : " When they had satisfied their thirst and hunger, they thought of their dear companions and wept, and in the midst of their tears sleep came gently upon them."

The truth, the whole truth and nothing but the truth— how rarely the older literatures ever told it ! Bits of the truth, yes ; every good book gives us bits of the truth ; would not be a good book if it did not. But the whole truth, no. Of the great writers of the past, in- credibly few have given us that. Homer—the Homer of the Odyssey—is one of those few.

Consider how almost any other of the great poets would have concluded the story of Scylla's attack on the passing ship. In any other poem but the Odyssey what would the survivors have done ? They would, of course, have wept, even as Homer made them weep. But would they previously have cooked and eaten their supper ? And after weeping, or actually while weeping, would they have dropped quietly off to sleep ? No, they most certainly would not have done any of these things. They would simply have wept, and the Canto would have ended tragically on their tears.

Homer, however, preferred to tell the Whole Truth. He knew that even the most cruelly bereaved must eat ; that hunger is stronger than sorrow, and that its satis- faction takes precedence even of tears. He knew that, when the belly is full men can afford to grieve, and that sorrow after supper is almost a luxury. And, finally, he knew that, even as hunger takes precedence of grief, so fatigue, supervening, cuts short its career. In a word, Homer refused to treat the theme tragically. He pre- ferred to tell the Whole Truth.

Another author who preferred to tell the Whole Truth was Fielding. Tom Jones is one of the very few Odyssean books written in Europe between the time of Aeschylus and the present age ; Odyssean, because never tragical ; never—even when painful and disastrous, even when pathetic and beautiful things are happening. For they do happen. Fielding, like Homer, admits all the facts, shirks nothing. Indeed, it is precisely because these authors shirk nothing that their books are not tragical. For among the things they don't shirk are the irrele- vancies which, in actual life, always temper the situations and characters that writers of tragedy insist on keeping chemically pure. Consider, for example, the case of Sophy Western. Fielding, it is obvious, adored her. But in spite of his adoration he refused to turn her into one of those chemically pure and, as it were, focussed beings who do and suffer in the world of tragedy. One remembers the innkeeper who lifted the weary Sophia from her horse. Tumbling flat on his back, he pulled Sophia down on top of him, head first. But head first is necessarily legs last ; there was a momentary display of the most ravishing charms ; poor Sophia, when they picked her up, was blushing in an agony of embarrassment and wounded modesty. There is nothing intrinsically improbable about thig incident ; put, however true, it is an incident which could never, never have happened to a heroine of tragedy. But Fielding shirked nothing. He did not want to be a tragedian. And, sure enough, the Muse of Tragedy was scared out of Tom Jones, just as, more than five and twenty centuries before, the sight of stricken men first eating, then remembering to weep, then forgetting their tears in slumber, had scared her out of the Odyssey.

In his Principles of Literary Criticism, Mr. I. A. Richards affirms that good tragedy is proof against irony and irrelevance. Indeed, he seems to make of this capacity to absorb the un-tragical and the anti-tragical a touch- stone of tragic merit. According to Mr. Richards, only the best of Shakespeare can stand the test. Now, the tragedies of Shakespeare are veined, it is true, with irony and an often terrifying cynicism ; but the cynicism is always heroic idealism turned neatly inside out ; the irony is a kind of photographic negative of heroic romance. But the shadow, the photographic negative of a thing, is in no sense irrelevant to it. Shakespeare's ironies and cynicisms serve to deepen his tragic world, but not to widen it. If they had widened it, as the Homeric irrelevancies widened out the universe of the Odyssey—why, then, the world of Shakespearean tragedy would automatically have ceased to exist. For example, a scene showing the bereaved Macduff eating his supper, growing melancholy over the whisky with thoughts of his murdered wife and children, and then, with lashes still wet, dropping off to sleep, would be true enough to life ; but it would not be true to tragic art. The introduction of such a scene would change the whole quality of the play ; treated in this Odyssean style, Macbeth would cease to be a tragedy. Tragedy and the Whole Truth are not compatible. There are certain things which even the best, even Shakespearean tragedy, cannot absorb into itself. To make a tragedy the artist must isolate a single element out of the totality of human experience and use that exclusively as his material. Tragedy is chemically pure. Hence its power to act quickly and intensely on our feelings. All chemically pure art has this power to act upon us quickly and intensely. It is because of its chemical purity that tragedy so effectively performs its function of catharsis. It refines and corrects and gives a style to our emotional life, and does so swiftly, with power. From the reading or the hearing of a tragedy we rise with the feeling that our

Friends are exultations, agonies, And love, and man's unconquerable mind;

with the heroic conviction that we too would be uncon- querable if subjected to the agonies, that in the midst of the agonies we too should continue to love, might even learn to exult. It is because it does these things to us that tragedy is felt to be so valuable. What are the values of Wholly-Truthful art ?

Wholly-Truthful art overflows the limits of tragedy and shows us, if only by hints and implications, what happened before the tragic story began, what will happen after it is over, what is happening simultaneously else- where (and " elsewhere " includes all those parts of the minds and bodies of the protagonists not immediately engaged in the tragic struggle). Tragedy is an arbitrarily isolated eddy on the surface of a great river. Wholly- Truthful art contrives to imply the existence of the entire river as well as of the eddy. It is quite different from tragedy, even though it may contain, among other constituents, all the elements from which tragedy is made. In Wholly-Truthful art the agonies may be just as real, love and the unconquerable Mind just as admirable, just as important, as in tragedy. But the agonies and indo- mitabilities are placed by the Wholly-Truthful writer in another, wider context, with the result that they cease to be the same as the intrinsically identical agonies and indomitabilities of tragedy. Consequently, Wholly- Truthful art produces in us an effect quite different from that produced by tragedy. Our mood, when we have read a Wholly-Truthful book, is never one of heroic exultation ; it is one of resignation, of acceptance. (Acceptance can also be heroic.) Being chemically impure, Wholly-Truthful literature cannot move us as quickly and intensely as tragedy or any other kind of chemically pure art. But I believe that its effects are more lasting. Our being cannot long hold the pattern imposed by tragedy. Remove the magnet and the filings tend to fall back into confusion. But the pattern of acceptance and resignation imposed upon us by Wholly- Truthful literature, though perhaps less unexpectedly beautiful in design, is (for that very reason perhaps) more stable. The catharsis of Tragedy is violent and apocalyptic ; but the milder catharsis of Wholly- Truthful literature is lasting.