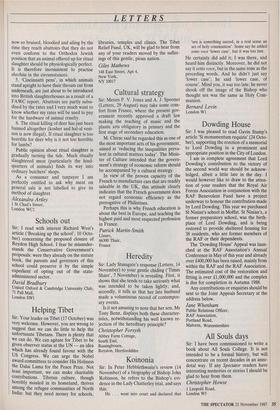 Sir: I was pleased to read Gavin Stamp's article 'Si monumentum requiris' (24 Octo- ber), supporting the erection of a memorial to Lord Dowding in a prominent and appropriate position in the City of London.

I am in complete agreement that Lord Dowding's contribution to the victory of the second world war should be acknow- ledged, albeit a little late in the day. I would however like to draw to the atten- tion of your readers that the Royal Air Forces Association in conjunction with the RAF Benevolent Fund have a project underway to honour the contribution made by Lord Dowding. This year we purchased St Ninian's school in Moffat. St Ninian's, a former preparatory school, was the birth- place of Lord Dowding, and is being restored to provide sheltered housing for 38 residents, who are former members of the RAF or their dependents.

The 'Dowding House' Appeal was laun- ched at the RAF Association's Annual Conference in May of this year and already over £400,000 has been raised, mainly from within the RAF and the RAF Association. The estimated cost of the restoration and fitting is over £1,000,000 and the complex is due for completion in Autumn 1988.

Any contributions or enquiries should be sent to the Joint Appeals Secretary at the address below.