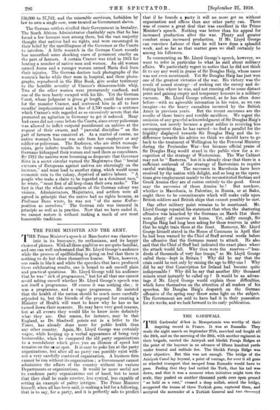 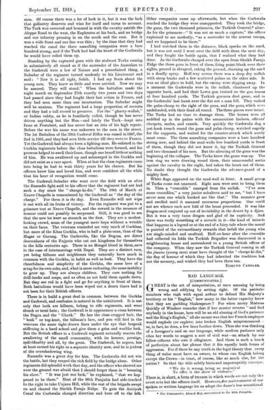 THE GARHWALL men. Of course there was a lot of

luck in it, but it was the luck that gallantry deserves and wins for itself and turns to account. The Turk was cornered and hemmed in with the cavalry astride the Aleppo Road to the west, the Euphrates at his back, and no bridge and our infantry pressing in on the south and the east. But it was a wide front and our line was thin ; by the time that they had reached the canal the three assaulting companies were a bare hundred strong, and if the Turk had had the heart of the Garhwalis he would have rolled them up.

Standing by the captured guns with the stalwart Turks coming in submissively all round as if the surrender of the Anatolian to the Garhwali were a law of Nature and a preordained thing, a Subadar of the regiment turned modestly to his Lieutenant and said : "Now it is all right, Sahib. I had my fears about the young men. They knew so little and were untried. Now we may be assured. They will stand." When the battalion made the night march on September 27th exactly two years and two days had passed since they had fought their last action in France, and they had seen more than one incarnation. The Subadar might well be anxious. The regiment had a large proportion of recruits and they had a tall record to preserve. For the " gharry-wallah," or Indian cabby, as he is familiarly called, though he has never driven anything but the Hun—and lately the Turk—leapt into fame at Festubert, and has never lost an iota of his high repute. Before the war his name was unknown to the man in the street. The 1st Battalion of the 39th Garhwal Rifles was raised in 1887, the 2nd in 1901, and they had seen little service till they went to France. Yet the Garhwali had always been a fighting-man. He enlisted in the Gurkha regiments before the class battalions were formed, and his prowess helped to swell their fame, though one heard little or nothing of him. He was swallowed up and submerged in the Gurkha and did not exist as a race apart. When at last the class regiments came into being he had to wait thirty years for his chance. But his officers knew him and loved him, and were confident all the while that his hour of recognition would come.

The Garhwali Subadar who went over the field with us after the Ramadie fight said to his officer that the regiment had not had such a day since the " charge-ki-din." The 10th of March at Neuve Chapelle is remembered by the Garhwali as "the day of the charge." For them it is the day. Even Ramadie will not wipe it out with all its fruits of victory. For the regiment was put to a grimmer test at Neuve Chapelle, and the reward in the measure of honour could not possibly be surpassed. Still, it was good to see that the new lot Were as staunch as the first. They are a modest. looking crowd, some of the youngest mere boys without a wrinkle on their faces. The veterans reminded me very much of Gurkhas, but more of the Khas Gurkha, who is half a plainsman, than of the Magar or Gurung. The Garhwalis, like the Dograa, are direct descerldants of the Rajputs who cut out kingdoms for themselves in the hills centuries ago. There is no Mongol blood in them, save in the case of intermarriage with Nepal. They are a distinct race, yet being hillmen and neighbours they naturally have much in common with the Gurkha, in habit as well as look. They have the cheerfulness and simplicity of the Gurkha, the same love of a scrap for its own sake, and, what is more endearing, the same inability to grow up. They are always children. They care nothing for drill-books and maps, and as often as not hold them upside down. But they see red in a fight and go for anything in front of them. Both battalions would have been wiped out a dozen times had it not been for their British officers.

There is in build a great deal in common between the Gurkha and Garhwali, and confusion is natural in the uninitiated. It is net only that both are hillmen, belong to rifle regiments, and wear slouch or terai hats ; the Garhwali is in appearance a cross between the Dogra and the " Ghurk." He has the close-cropped hair, the " bodi " or top-knot, the hillman's face, and you will find in the veterans the same tight-drawn lines under the eye that bespeak stiffening in a hard school and give them a grim and warlike look.

But the British officer in a Garhwali regiment naturally resents the swallowing of the small community, with its honour, prestige, individuality and all, by the great. The Garhwali, he argues, has at least earned his right to a separate identity now, and he is jealous of the overshadowing wing.

Ramadie was a great day for him. The Garhwalis did not win the battle, but they reaped the rich field by the bridge alone. Other regiments did splendid work that day, and the officer who showed me

over the ground was afraid that I should forget them in "booming his show." "It was just our luck," he explained, "that we hap-

pened to be there." Most of the 90th Punjabis had side-tracked to the right to take Unjana Hill, while the rest of the brigade swept on and cleared the Sheikh Faraja Ridge. To gain the Aziziyah Canal the Garhwalis changed direction and bore off to the left. Other companies came up afterwards, but when the Garhwalis reached the bridge they were unsupported. They took the bridge, the guns, the two thousand prisoners, the Turkish General,* alone. As for the prisoners—" It was not so much a capture," the officer explained to me modestly, "as a surrender to the nearest troops. and we happened to be there."

I had watched them in the distance, black specks on the sand, but it was not until I went over the field with them the next day, and they fought the battle again, that I realized what they had done. As the Garhwalis charged over the open from Sheikh Farajs Ridge the three guns in front of them, firing point-blank over their sights, poured in shrapnel, raking the ground, churning up the sand in a deadly spray. Half-way across there was a deep dry nutlet' with steep banks and a few scattered palms on the other side. It was an ideal place to hold, but the enemy were slipping away. In a moment the Garhwalis were in the nullah, clambered up the opposite bank, and had their Lewis gun trained on the gun teams at four hundred yards. The Turkish gunners died game, and in the Garhwalis' last burst over the flat not a man fell. They rushed the palm-clump to the right of the guns, and the guns, which were undefended, with their dead all round. The three pieces were intact. The Turks had no time to damage them. The horses wore all saddled up in the palms with the ammunition limbers, officers* chargers, mules, and camels. Very quickly the Garhwalis dug a pot-hook trench round the guns and palm-clump, watched eagerly . for the supports, and waited for the counter-attack which surely must come. The three assaulting companies were a bare hundred strong now, and behind the mud-walls five hundred yards in front of them, though they did not know it, lay the Turkish General and two thousand of his men. But the silencing of the guns was the beginning of the collapse. The Turks knew the game was up. The iron ring we were drawing round them, their unsuccessful sortie against the cavalry in the night, had taken the heart out of them. No doubt they thought the Garhwalis the advance-guard of a mighty host.

White flags appeared on the mud-wall in front. A small group of Turks came out unarmed. Eight men were sent to bring them in. Then a "crocodile" emerged from the nullah. "I've seen some crocodiles," a very junior subaltern said to me, "but I have never seen one which bucked me like that." The monster grew and swelled until it assumed enormous proportions. One could not see whence each new fold of the beast proceeded. It was like dragon-seed conjured up out of invisibility in the desert by a djinn. But it was a very tame dragon and glad of its captivity. And there was really something of a miracle in it—the kind of Miracle that happens in a legend or at the end of a fairy-tale where the moral is pointed of the extraordinary rewards that befall the young who are single-minded and unafraid. Hall-an-hour after the crocodile had collected its folds the Turkish Brigadier was discovered in a neighbouring house and surrendered to a young British officer of the company. When they saw the Turkish General coming in all the jiwane (young men) must have thought of the "charge-hi-din," the day of honour of which they had inherited the tradition but not the memory, and wished they had been there too.