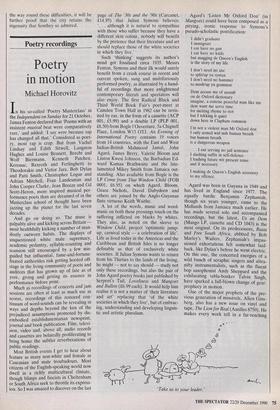 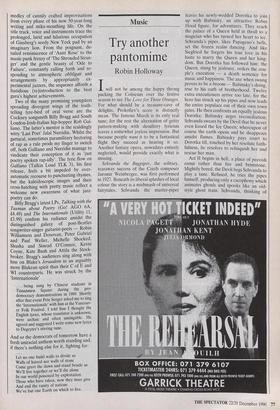 In his so-called 'Poetry Masterclass' in the Independent on Sunday for 21 October, James Fenton declared that 'Poems with an insistent musical beat were comparatively rare,' and added: 'I say were because rap has changed all that.' Considered as poet- ry, most rap is crap. But from Vachel Lindsay and Edith Sitwell, Langston Hughes and Louise Bennett, Brecht and Wolf Biermann, Kenneth Patchen, Kerouac, Rexroth and Ferlinghetti to Theodorakis and Victor Jara, Bob Dylan and Patti Smith, Christopher Logue and Adrian Mitchell, Fran Landesman and John Cooper Clarke, Jean Breeze and Gil Scott-Heron, more inspired musical per- formance poets than are dreamed of in the MaSterclass school of thought have been jazzing up the planet for the last seven decades. .

And . go on doing so. The muse is palpably alive and kicking across Britain— most healthfully kicking a number of man- ifestly outworn habits. The displays of unquestioned white male supremacy, academic pedantry, syllable-counting and scansion still encouraged by a few mis- guided but irifluential, fame-and-fortune- fixated authorities risk getting hooted off- stage in the living community of poets and auditors that has grown up of late as of yore, giving and getting its essence in performance before print. Much as recordings of concerts and jam sessions are often at least as much use as scores, recordings of this restored con- tinuum of word-sounds can be revealing in ways and depths beyond the ken of the prejudiced assumptions promoted by dis- embodied establishmentarian newsprint, journal and book publication. Film, televi- sion, video and, above all, audio records and cassettes are belatedly proliferating to bring home the subtler reverberations of public readings. Most British events I get to hear about feature as many non-white and female as Caucasian and male troubadours. Most citizens of the English-speaking world now dwell in a richly multicultural climate, though blimps and fascists in Cheltenham or South Africa seek to throttle its express- ion. So I was amazed to discover on the last

page of The '30s and the '90s (Carcanet, £14.95) that Julian Symons believes: . . although it is natural to sympathise with those who suffer because they have a different skin colour, nobody will benefit by the pretence that their literature and art should replace those of the white societies in which they live.'

Such 'thinking' suggests its author's mind got fossilised circa 1935. Messrs Fenton, Symons and their ilk would surely benefit from a crash course in recent and current spoken, sung and multifariously performed poetry, as illustrated by a hand- ful of recordings that more enlightened contemporary literati and spectators will also enjoy. The first Radical Black and Third World Book Fair's poet-meet at Camden Town Hall in 1982 can be revis- ited by ear, in the form of a cassette (ACP 001, £5.99) and a double LP (PLP 001, £8.50) from Bogle l'Ouverture, 5a Chignell Place, London W13 OTJ. An Evening of International Poetry contains 19 voices from 14 countries, with the East and West Indian-British Mahmood Jamal, John Agard, James Berry, Valerie Bloom and Linton Kwesi Johnson, the Barbadian Ed- ward Kamau Brathwaite and the late- lamented Mikey Smith from Jamaica out- standing. Also available from Bogle is the LP Come from That Window Child (FOB 0001, £6.95) on which Agard, Bloom, Grace Nichols, David Dabydeen and others are joined by the Anglo-Guyanan flute virtuoso Keith Waithe.

A lot of the words, music and word- music on both these pressings touch on the suffering inflicted on blacks by whites. They also, as noted on the sleeve to Window Child, project 'optimistic jump- up, carnival style — a celebration of life'. Life as lived today in the Americas and the Caribbean and British Isles is no longer definable as that of exclusively white societies. If Julian Symons wants to return from his Thirties to the lands of the living, he might — not to say should — study not only these recordings, but also the pair of John Agard poetry books just published by Serpent's Tail, Loveliness and Mangoes and Bullets (£6.99 each). It would help him realise it is not a matter of 'their literature and art' replacing that 'of the white societies in which they live', but of embrac- ing, understanding and developing linguis- tic and artistic pluralism. Agard's 'Listen Mr Oxford Don' (in Mangoes) could have been composed as a pitying, ironic response to Symons's pseudo-scholastic pontification:

but mugging de Queen's English is the story of my life I don't need no axe to split/up yu syntax I don't need no hammer to mash/up yu grammar Dem accuse me of assault on de Oxford dictionary imagine, a concise peaceful man like me dem want me serve time for inciting rhyme to riot but I tekking it quiet down here in Clapham common

is a dangerous weapon

I making de Queen's English accessory to my offence.

Agard was born in Guyana in 1949 and has lived in England since 1977. The equally bardic Benjamin Zephaniah, though six years younger, came to the Midlands from Jamaica much earlier. He has made several solo and accompanied recordings, but the latest, Us an Dem (Mango LP, cassette and CD 1043) is the most original. On its predecessors, Rasta and Free South Africa, abEtted by Bob Marley's Wailers, Zephaniah's impas- sioned exhortations felt somewhat laid- back, like Dylan's before he went electric. On this one, the concerted energies of a wild bunch of seraphic singers and ultra- nifty instrumentalists, such as the fluent bop saxophonist Andy Sheppard and the exhilarating tabla-bonker Talvin Singh, have sparked a full-blown change of gear: prophecy in motion.

One of the major prophets of the pre- vious generation of minstrels, Allen Gins- berg, also has a new issue on vinyl and tape, The Lion for Real (Antilles 8750). He makes every work tell in a far-reaching `Take us to your leader.' medley of cannily crafted improvisations from every phase of his now 50-year-long writing and mike-mouthing life. On the title track, voice and instruments trace the prolonged, lurid and hilarious occupation of Ginsberg's seedy New York pad by an imaginary lion. From the poignant, de- tailed reminiscence of 'Aunt Rose' to the manic punk frenzy of The Shrouded Stran- ger' and the gentle beauty of 'Ode to Failure', constantly calling forth and re- sponding to atmospheric obbligati and arrangements by appropriately ex- perimental jazzers, the sequence affords a fastidious (re)introduction to the beat guru's highest achievements. Two of the many promising youngsters spreading divergent wings of the truth- telling lyre-bird of oral verse are the Cockney songsmith Billy Bragg and South London-Irish-Italian hip-hopper Rob Gal- liano. The latter's mentor is the scaldingly witty 'Last Poet' Jalal Nurridin. Whilst the guttural, sometimes paramilitary hectoring of rap as a rule prods my finger to switch off, both Galliano and Nurridin manage to vindicate their conception of it as 'just poetry spoken rap-idly'. The lyric flow on Galliano (Talkin Loud TLK 3), his first release, feels a bit impeded by over- automatic recourse to punctuating rhymes, but the kaleidoscopic images and their cross-hatching with pretty music reflect a welcome new awareness of what jazz- poetry can do. Billy Bragg's latest LPs, Talking with the Taxman about Poetry (Go! AGO 6A, £4.49) and The Internationale (Utility 11, £3.99) confirm his radiance amidst the distinguished galaxy of post-Beatles songwriter-singer guitarist-poets — Robin Williamson and Donovan, Peter Gabriel and Paul Weller, Michelle Shocked, Shusha and Sinead O'Connor, Kevin Coyne, Kate Bush and Attila the Stock- broker. Bragg's audiences sing along with him on Blake's Jerusalem in an arguably more Blakean spirit than their C of E and WI counterparts. He was struck by the `Internationale' . being sung by Chinese students in Tiananmen Square during the pro- democracy demonstrations in 1989. Shortly after that event Pete Seeger asked me to sing the 'Internationale' with him at the Vancouv- er Folk Festival. I told him I thought the English lyrics, whose translator is unknown, were archaic and often unsingable. He agreed and suggested I write some new lyrics to Degeyter's stirring tune.

And so the democrats of tomorrow have a fresh uniracial anthem worth standing and, if there's nothing else for it, fighting for: • • -

Let no one build walls to divide us

Walls of hatred nor walls of stone Come greet the dawn and stand beside us We'll live together or we'll die alone In our world poisoned by exploitation Those who have taken, now they must give And end the vanity of nations We've but one Earth on which to live.