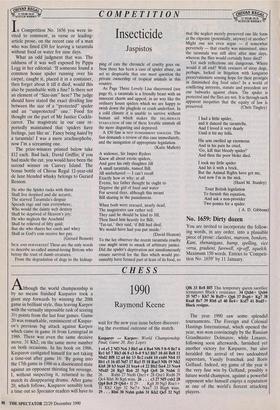 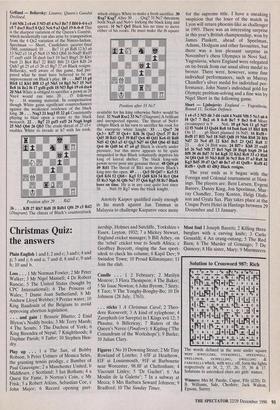 Although the world championship is by no means finished Kasparov took a giant step forwards by winning the 20th game in brilliant style, thus leaving Karpov with the virtually impossible task of scoring 31/2 points from the last four games. Game 20 was remarkable, reminiscent of Kaspar- ov's previous big attack against Karpov which came in game 16 from Leningrad in 1986. There was even the same decisive move, 31 Kh2, on the same move number on both occasions. In his book on 1986, Kasparov castigated himself for not taking a time-out after game 16: `By going into the 17th game in 1986 in a disoriented state against an opponent thirsting for revenge, I, without suspecting it, returned to the match its disappearing drama. After game 20, which follows, Kasparov sensibly took a time out so Spectator readers will have to wait for the new year issue before discover- ing the eventual outcome of the match.

The year 1990 saw some splendid tournaments. The Foreign and Colonial Hastings International, which opened the year, was won convincingly by the Russian Grandmaster Dolmatov, while Linares, following soon afterwards, furnished yet another victory for Kasparov, but also heralded the arrival of two undoubted superstars, Vassily Ivanchuk and Boris Gelfand. Indeed, my game of the year is the very fine win by Gelfand, possibly a future world champion, against a powerful opponent who himself enjoys a reputation as one of the world's fiercest attacking players.

Anotoly Karpov qualified easily enough in his match against Jan Timman in Malaysia to challenge Kasparov once more for the supreme title. I have a sneaking suspicion that the loser of the match in Lyon will return phoenix-like as challenger in 1993. There was an interesting surprise in this year's British championship, won by James Plaskett, ahead of Speelman, Adams, Hodgson and other favourites, but there was a less pleasant surprise in November's chess Olympics in Novi Sad, Yugoslavia, where England were relegated on tie-break from our usual silver medal to bronze. There were, however, some fine individual performances, such as Murray Chandler's silver medal for individual per- formance, John Nunn's individual gold for Olympic problem-solving and a fine win by Nigel Short in the following game.