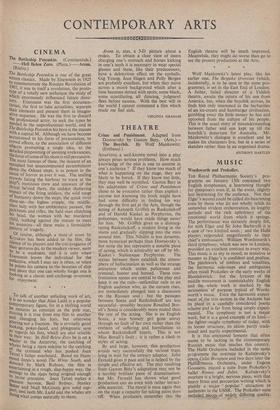 Crime and Punishment. Adapted from Dostoevsky by Gaston Baty. (Arts.)— The Boychik. By Wolf Mankowitz. (Embassy.)

ADAPTING a well-known novel into a play always poses serious problems. How much knowledge of the plot is one to assume in one's audience ? If they know too much of what is happening on the stage, they are likely to be bored. If they know too little, they may well be mystified. Gaston Baty in his adaptation of Crime and Punishment chose to be evocative rather than explicit : anyone not knowing the book might have had some difficulty in finding his way through the first act at the Arts, though the acting of Kenneth Griffith as Raskolnikoff and of Harold Kasket as Porphyrius, the policeman would have made things easier for him. Mr. Griffith gives us a disinteg- rating Raskolnikoff, a student living in the slums and gradually slipping into the mire around him. This Nihilist is less dynamic, more hysterical perhaps than Dostoevsky's, but none the less represents a notable piece of acting, which is admirably set off by Mr. Kasket's Stalinesque Porphyrius. The scenes between them establish the atmos- phere of hallucination as well as the strange attraction which unites policeman and criminal, hunter and hunted. These con- frontation scenes are central to the play and keep it on the rails—unfamiliar rails to an English audience who, as the curtain rises, are immediately plunged into a discussion on the Russian soul but the passages between Sonia and Raskolnikoff are less successful—possibly because Rosalind Box- all's Sonia is considerably more muted than the rest of the acting. She is an English Sonia, a nice homely girl gone astray through no fault of her own rather than the emblem of suffering and humiliation to whom Raskolnikoff kneels. This is not Miss Boxall's fault ; it is rather a clash in styles of acting.

By and large, however, this production avoids very successfully the various traps lying in wait for the unwary adaptor. John Fernald gives it pace and he is helped by the simple and effective set. The play resulting from Qaston Baty's adaptation may not be a terribly brilliant piece of dramatisation, but Mr. Fernald has shown what good production can do even with rather intract- able material. The moral is once again that on the stage a capacity for taking pains pays off. When producers remember this the

English theatre will be much improved. Meanwhile, they might do worse than go to see the present production at the Arts.

Wolf Mankowitz's latest play, like his earlier one, The Bespoke Overcoat (which, incidentally, is to be seen in the same pro- gramme), is set in the East End of London. A father, failed director of a Yiddish theatre, awaits the return of his son from America, but, when the boychik arrives, he finds him only interested in the barbarities of an ice-cream and hamburger civilisation, gambling away the little money he has and uprooted from the culture of his people. This is the usual story of misunderstanding between father and son kept up till the boychik's departure for Australia. Mr. Mankowitz's dialogue is excellent and he makes his characters live, but in a series of sketches rather than in an organised drama.