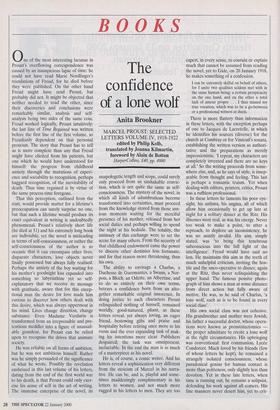 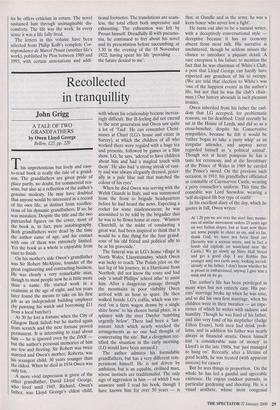 The confidence of a lone wolf

MARCEL PROUST: SELECTED LETTERS VOLUME IV, 1918-1922 edited by Philip Kolb, translated by Joanna Kilmartin, foreword by Main de Botton HarperCollins, f40, pp. 4980 One of the most interesting lacunae in Proust's overflowing correspondence was caused by an inauspicious lapse of time: he could not have read Marie Nordlinger's translations of Freud, for he died before they were published. On the other hand Freud might have read Proust, but probably did not. It might be objected that neither needed to read the other, since their discoveries and conclusions were remarkably similar, analysis and self- analysis being two sides of the same coin. Freud worked logically, Proust intuitively: the last line of Time Regained was written before the first line of the first volume, so Freudianly dependent on that personal pronoun. The story that Proust has to tell us is more complete than any that Freud might have elicited from his patients, but one which he would have understood for himself: the progress from childhood anxiety through the mutations of experi- ence and sociability to recognition, perhaps haggard recognition, of the inevitability of death. Thus time regained is by virtue of the same process time foregone.

That this perception, outlined from the start, would provide matter for a lifetime's preoccupation can surely surprise no one, but that such a lifetime would produce its exact equivalent in writing is undoubtedly phenomenal. Proust's relatively short life (he died at 51) and his extremely long book are indivisible, yet the novel is misleading in terms of self-consciousness, or rather the self-consciousness of the author is so oceanic that it can encompass other lives, disparate characters, love objects never finally possessed but always fully realised. Perhaps the anxiety of the boy waiting for his mother's goodnight kiss expanded into something so labyrinthine yet so self- explanatory that we receive its message with gratitude, aware that for this excep- tional man the desire for love made him curious to discover how others dealt with this desire, which was always uppermost in his mind. Lives change direction, change substance. Even Madame Verdurin is transformed from an irrepressible and pre- tentious meddler into a figure of unassail- able grandeur, for Proust can be relied upon to recognise the drives that animate society.

He was reliable on all forms of ambition, but he was not ambitious himself. Rather was he simply persuaded of the significance of what he wrote. Possibly the revelation enshrined in this last volume of his letters, dating from the end of the first world war to his death, is that Proust could only exer- cise his sense of self in the act of writing. The immense enterprise of the novel, its unapologetic length and scope, could surely only proceed from an unshakable convic- tion, which is not quite the same as self- consciousness. The mystery of the novel, in which all kinds of adumbrations become transformed into certainties, must proceed from the knowledge stored from those anx- ious moments waiting for the merciful presence of his mother, released from her social duties and perhaps willing to spend the night at his bedside. The totality, the intimacy of this exchange were to set the scene for many others. From the security of that childhood endowment came the power to discern other destinies less fortunate, and for that reason more threatening, than his own.

The ability to envisage a Charlus, a Duchesse de Guermantes, a Swann, a Nor- pois, a Bloch, an Odette, an Albertine, and to do so entirely on their own terms, betrays a confidence born from an alto- gether remarkable original innocence. In doing justice to such characters Proust relinquished nothing of himself, remained worldly, good-natured, pliant, as these letters reveal, yet always loving, an eager friend, bestowing gifts and praise and hospitality before retiring once more to his room and the ever expanding task of mak- ing his intentions more clear. Publishers despaired; the task was omnipresent, ineluctable. In the end the man is as much of a masterpiece as his novel.

He is, of course, a comic writer. And his letters reveal a sophistication very different from the stoicism of Marcel in his narra- tive. He can be, and is, playful and some- times maddeningly complimentary in his letters to women, and not much more rugged in his letters to men. They are too expert, in every sense, to contain or explain much that cannot be assumed from reading the novel, yet to Gide, on 20 January 1918, he makes something of a confession.

I can be extremely skilful on behalf of others, for I unite two qualities seldom met with in the same human being: a certain perspicacity on the one hand, and on the other a total lack of amour propre . . . I thus missed my true vocation, which was to be a go-between or a professional witness at duels.

There is more flattery than information in these letters, with the exception perhaps of one to Jacques de Lacretelle, in which he identifies his sources (diverse) for the church at Combray or for Vinteuil's sonata, establishing the written version as authori- tative and the preparations as merely impressionistic. 'I repeat, my characters are completely invented and there are no keys at all.' So the writing proceeds from some- where else, and, as he says of style, is insep- arable from thought and feeling. This last is perhaps a romantic truism. Yet when dealing with editors, printers, critics, Proust was a ruthless professional.

In these letters he laments his poor eye- sight, his asthma, his angina, all of which allow him occasionally to get up late at night for a solitary dinner at the Ritz. His illnesses were real, as was his energy. Never too weak to make a point, to utter a reproach, to deplore an inconsistency, he was no saintly invalid. His aim, simply stated, was 'to bring this tenebrous subconscious into the full light of the intelligence'. Freud would have said no less. He maintains this aim in the teeth of much unhelpful criticism, inviting the hos- tile and the unto-operative to dinner, again at the Ritz, thus never relinquishing the upper hand. The famous pensive photo- graph of him shows a man at some distance from direct action but fully aware of motive. He was, as he said of Charlus, 'a lone wolf, such as is to be found in every social class'.

His own social class was not cohesive. His grandmother and mother were Jewish, his father a successful doctor, whose opera- tions were known as proustatectomies the proper admixture to create a lone wolf in the right circumstances. His upbringing was conventional: first communion, Lycee Condorcet. Much loved by his friends (few of whose letters he kept), he remained a strangely isolated consciousness, whose paradoxical genius for human contact is more than politeness, only slightly less than devotion. Yet in these late letters, when time is running out, he remains a solipsist, defending his work against all corners. His fine manners never desert him, yet to crit- ics he offers criticism in return. The novel sustained him through unimaginable dis- comforts. The life was the work. In every sense it was a life fully lived.

The letters in this volume have been selected from Philip Kolb's complete Cor- respondance de Marcel Proust (another life's work), published by Plon between 1989 and 1993, with certain annotations and addi- tional footnotes. The translations are seam- less, the total effect both impressive and exhausting. The exhaustion was felt by Proust himself. Dreadfully ill with pneumo- nia, he continued to fret about his novel and its presentation before succumbing, at 5.30 in the evening of the 18 November 1922, having spent his life 'providing . . . the future denied to me'.