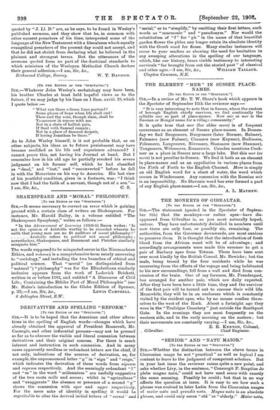 [To THE EDITOR OF THE "SPECTATOR."] SIR,—It is to be hoped that the American and other altera- tions in the spelling of English words—changes which have already obtained the approval of President Roosevelt, Mr. Carnegie, and other influential persons—may not be pressed so far as to obscure the visible and literal connexion between derivatives and their original sources. For there is much interest and instruction in such connexion. And in many cases apparently needless or redundant letters are the chief, if not only, indications of the sources of derivation, as, for example, the unpronounced letter " g " in " sign " and "reign," which indicates the derivation of these words from signum and regnum respectively. And the seemingly redundant "1" and "m" in the word " millennium " are usefully suggestive of the two roots mills and annus; whilst in " agriculture " and " exaggerate " the absence or presence of a second " g " shows the connexion with ager and agger respectively. For the mere sake of identity in spelling it would be regrettable to alter the derived initial letters of " cereal " and

"serial," or to "simplify," by omitting their first letters, such words as " mnemonic " and "pseudonym." Nor would the substitution of " f " for " ph " in the name of that beautiful garden flower the phlox any longer retain its absolute identity with the Greek word for flame. Many similar instances will occur to your readers as showing the need for hesitation in any sweeping alterations in the spelling of our language, which, like our history, bears visible testimony to interesting survivals "far brought from out the storied past" of classical