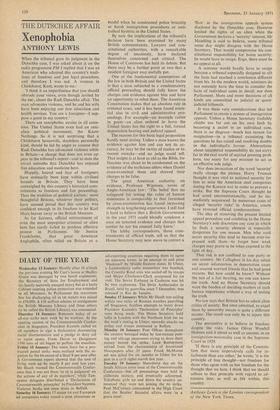 When the tribunal gave its judgment in the Dutschke case, I was asked about it on the radio programme PM I replied that I was an American who admired this country's tradi- tions of freedom and just legal procedure, and therefore I was sad. A woman in Chislehurst, Kent, wrote to me: 'I think it an impertinence that you should obtrude your views, even though invited by the BBC, about the Rudi Dutschke affair. The man advocates violence, and he and his wife have been enjoying our free education and health services. You are a foreigner—I sup- pose a guest in my country.'

There are xenophobic strains in all coun- tries. The United States even had an anti- alien political movement, the Know Nothings. So it is not surprising that a Chislehurst housewife, doubtless personally kind, should be led by anger to assume that Rudi Dutschke has advocated violence while in Britain—a charge that does not even ap- pear in the tribunal's report—and to state the trivial untruths that Dutschke has enjoyed free education and medicine here.

Happily, hatred and fear of foreigners have ordinarily been kept within civilised bounds in Britain. They have been outweighed by this country's historical com- mitments to freedom and fair proceeding. Thus the tradition of political asylum : most thoughtful Britons, whatever their politics, have seemed proud that this country was confident enough in its freedom to let Karl Marx beaver away in the British Museum.

As for fairness, official mistreatment of even the most unpopular criminal or alien here has rarely failed to produce effective protest in Parliament. Mr Justice Frankfurter, that great American Anglophile, often relied on Britain as a model when he condemned police brutality or harsh immigration procedures or anti- radical hysteria in the United States.

By now the implications of the tribunal's decision have been examined by many British commentators. Lawyers and con- stitutional authorities, with a remarkable degree of unanimity, have declared themselves concerned and critical. The House of Commons has held its debate. But there may be a further point or two that a resident foreigner may usefully put.

One of the fundamental assumptiOns of the law in both Britain and the United States is that a man subjected to a condemnatory official proceeding should fully know the charges and evidence against him and have an opportunity to rebut them. The American Constitution makes that an absolute rule in criminal cases, and it has been found essen- tial also in civil and administrative pro- ceedings. For example—an example rather in point—an alien ordered to leave the United States has the right to a full, formal deportation hearing and judicial appeal.

The reasons for this basic legal proposition hardly need stating. Unless a man knows the evidence against him and can test its ac- curacy, he may be the victim of malice or in- nocent mistake—and no judge could tell. That insight is at least as old as the Bible, for Susanna was about to be condemned on the evidence of the malicious elders when Daniel cross-examined them and showed their charges to be false.

The great American authority on evidence, Professor Wigmore, wrote of

Anglo-American law: 'The belief that no safeguard for testing the value of human

statements is comparable to that furnished

by cross-examination has found increasing• strength in lengthening experience. I still find it hard to believe that a British Government in the year 1971 could blandly condemn a man on untested evidence and charges that neither he nor his counsel fully knew.'

The lobby correspondents, those com- municants of official truth, tell us that the Home Secretary may now move to correct a `flaw' in the immigration appeals system disclosed by the Dutschke case. However limited the rights of an alien when the Government declares a 'security' interest, Mr Maudling is said to believe, some tribunal some day might disagree with the Home Secretary. That would compromise his con- stitutional responsibility for home security; he would have to resign. Ergo, there must be no appeal at all.

A minister would hardly have to resign because a tribunal especially designed to sift the facts had reached a conclusion different from his. In the modern world, ministers do not remotely have the time to consider the facts of individual cases in detail; nor does Parliament. More and more decisions of all kinds are committed to judicial or quasi judicial tribunals.

It was these very considerations that led Parliament to create a system of immigration appeals. Unless a Home Secretary foolishly climbs too far out on his own limb by becoming a zealot in an individual case, there is no disgrace—rnuch less reason for resignation—in a tribunal examining the questions he has raised and resolving doubts in the individual's favour. Abstractions about ministerial responsibility do not carry far in the real world of myriad pressing prob- lems, too many for any minister to act as an effective sole judge.

Nor does invocation of the word 'security' really change the picture. Harry Truman thought it was vital to national security for him to seize the American steel companies during the Korean war in order to prevent a strike. But the Supreme Court thought he had acted unconstitutionally, and he im- mediately acquiesced. In numerous cases of alleged 'security risks' in America, courts have reversed official condemnations.

The idea of removing the present limited appeal procedure and confiding to the Home Secretary's sole discretion any case in which he finds a security element is especially dangerous for one reason. Men who read secret security files tend to become over-im- pressed with them—to forget how weak charges may prove to be when exposed to the light of day.

That risk is not confined to one party or one country. Mr Callaghan in his day relied on secret information in deportation cases and assured worried friends that he had good reasons. But how could he know? Without the test of a fair hearing, no one can know the. truth. And no Home Secretary should want the burden of deciding matters of such human importance without a way of testing the truth.

No law says that Britain has to admit alien critics of society. But once admitted, to expel them by unworthy means is quite a different matter. The result can only be to injure this country.

The preventive is to believe in freedom despite the risks. Justice Oliver Wendell Holmes said it about as well as anyone, in an immigration-nationality case in the Supreme Court in 1929.

'If there is any principle of the Constitu- tion that more imperatively calls for at- tachment than any other,' he wrote, 'it is the principle of free thought—not freedom for those who agree with us but freedom for the thought that we hate. I think that we should adhere to that principle with regard to ad- mission into, as well as life within, this country.

Anthony Lewis is the London correspondent of the New York Times.