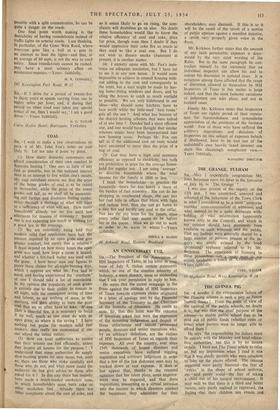 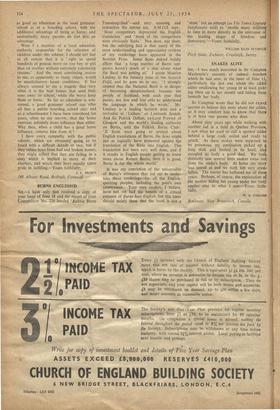 SIR,-4 wonder if the comparative failure of the Fleming scheme is such a pity as James Nowell thinks '? From the point of view of the survival of the public schools, no doubt it is; but was that the chief purpose of the scheme—to enable public school fees to be paid out of public funds (whether rates or taxes) when parents were no longer able to afford them ?

He says the responsibility for failure must lie entirely with the Ministry and local educa- tion authorities,' but this is by no means certain. I have not The Times article to refer to, but my impression when I read it was that it was chiefly parents who were reluctant to take up the places offered. The reasons suggested were partly financial—the fear of

' extras ' in the shape of school uniform, etc.—and partly social—the fear of taking a child out of his natural environment. It may well be that there is a third and better reason, only partly realised or expressed, the feeling '.*bat their children can obtain just as good an education at the local grammar school as at a boarding school, with the additional advantage of being at home; and undoubtedly many parents do feel this an advantage.

Were 1 a member of a local education authority responsible for the selection of children under this scheme, I should not feel at all certain that it is ' right to spend hundreds of pounds more on one boy or girl than on another without extremely convincing reasons.' And the most convincing reason to me, as apparently to many others, would be unsatisfactory home conditions. It has always seemed to me a tragedy that -very often it is the best homes that send their sons away to school,' while the Worst keep them at home. So far as education is con- cerned. a good grammar school can offer all that a public boarding school can; and as a schoolmaster I have been convinced for years, often to my sorrow, that the home exercises infinitely more influence than either. Why then, when a child has a good home influence, remove him from it ?

I have every sympathy with the public schools, which arc obviously' going to be faced with a difficult decade or two; but if they refuse boys from bad and broken homes, they might reflect that they are failing in a ...duty which is implicit in many of their charters, and which they have usually taken pride in fulfilling.—Yours faithfully,