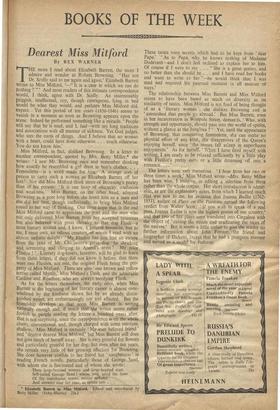 By REX WARNER THE more I read about Elizabeth Barrett, the more I admire and wonder at Robert Browning. ' Has not Dr. Scully said to me-again and again,' Elizabeth Barrett writes to Miss Mitford, '—" It is a. case in which we can do nothing ? "' And most readers of this intimate correspondence Would, I think, agree with Dr. Scully. An interminably priggish, intellectual, coy, though courageous, lying in bed Would be what they would, and perhaps Miss Mitford did, expect. Yet this period of ten years (1836-1846) seems to vanish in a moment as soon as Browning appears upon the scene. Indeed he performed something like a miracle. ' People will say that he is mad, and I, bad—with my long traditions and associations with all manner of sickness. Yet God judges, Who sees the roots of things. And I believe that no woman With a heart, could have done otherwise . . . much otherwise. You do not know him.'

Miss Mitford, in fact, disliked Browning. In a letter to another correspondent, quoted by Mrs. Betty Miller,* she Writes: '1 saw Mr. Browning once and remember thinking how exactly he resembled a girl drest in boy's clothes. . . . Femmelette—is a word made for hitu. A strange sort. of person to carry such a woman as Elizabeth Barrett off her feet.' Nor did Miss Mitford think more of Browning's poetry than of his person: 'It is one heap of obscurity, confusion and weakness.' Miss Barrett, on the other hand, admired ' Browning as a poet long before she loved him as a man and she did her best, though ineffectually, to bring Miss Mitford round to her way of thinking. One must hope that in the end Miss Mitford came to appreciate the poet and the man who not only delivered Miss Barrett from her accepted tyrannies but also behaved with great chivalry, to that dog Flush—a most literary animal and, I know, a general favourite, but to me, I must own, an odious creature, of whom I read with an almost sadistic delight: 'My Flushic has just had an escape from the jaws of Mr. Chichester's great dog—he shrieking and screaming and clinging to Arabel's arms ! MY poor Flushie ! ' Literary dog-lovers, however, will be glad to learn from these letters, if they did not know it before, that there were two Flushes, not one, the original Flush being the pro- perty of Miss Mitford. There are also 'our brown and yellow terrier called Myrtle,' Miss Mitford's Dash, and the admirable Catiline and Resolute, .who are always terrifying Flush. As for the letters themselves, the early ones, when Miss Barrett at the beginning of her literary career is almost over- whelmed by the kindness shown her by an already distin- guished writer, are embarrassingly coy and affected. But the friendship develops so that soon Miss Barrett is writing naturally enough and, if much that she writes seems rather foolish to people reading thp letters a hundred years after, that is not surprising, since the correspondence is on the whole , chatty, conventional, and, though charged with some emotion. shallow. Miss Mitford is certainly 'My ever beloved friend' and ' dearest dearest Miss Mitford,' but Miss Barrett still does not give much of herself away. She is very grateful for flowers . and particularly grateful for her dog; but even after ten years, she reveals very little of her growing affection for Browning. She does however confide to her friend her 'naughtiness ' in reading French novels, particularly those of George Sand, with whom she is fascinated and of whom she wrote: Thou large-brained woman and large-hearted man. Self-called George Sand 1 whose soul, amid the lions Of thy tumultuous senses, moans defiance And answers roar for roar, as spirits can. . . . These tastes were secrets which had to be kept from 'dear Papa.' 'As to Papa, why he knows nothing of Madame Dudevant—and 1 don't feel inclined to explain her to him. Of course if I were to say . . . "She is a great genius, and no better than she should be . . . and I have read her books and want to write to her "—he would think that I was mad and required his paternal restraint in all manner of ways.'

The relationship between Miss Barrett and Miss Mitford seems to have been based as much on diversity as on similarity of tastes. Miss Mitford is not fond of being thought of as a literary woman'; she dislikes Browning and is astonished that people go abroad.' But Miss Barrett, even in her incarceration in Wimpole Street, demands, 'Who, with strength and opportunity, should pass into the world of spirits, without a glance at the Jungfrau ? ' Yet, until the appearance of Browning, that conquering femmelette, she can make no physical effort of any kind; she disapproves of the Queen's enjoying herself, since 'the senses fall as:cep in superfluous enjoyments.' As for herself. When I have tired myself with writing, I am ready to be relaxed sufficiently by a little play with Flushie's pretty ears, or a little dreaming off into a romance.... '

The letters were very numerous. I hear from her two or three times a week.' Miss Mitford wrote.—Mrs. Betty Miller has been wise, I imagine, in editing a selection from them rather than the whole corpus. Her short introduction is admir- able, as are the explanatory notes, from which I learned much that was new to me, for instance that Joanna Baillie (1762- 1851), author of Plays on the Passions earned the following verdict from Walter Scott: ' If you wish to speak of a real poet, Joanna aillie is now the highest genius of our country,' and that two of hcr plays were translated into Cingalese with the object of raising the minds and eradicating the vices of the natives.' But it seems a little unfair to give the reader no further information about John Forster, the friend and biographer of Dickens, except that he had a pompous manner and served as a model for Podsnap.