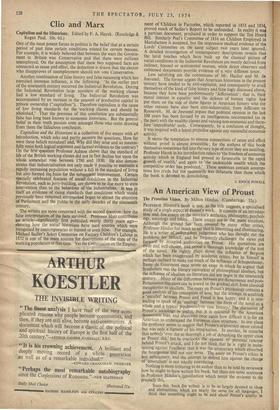 Capitalism and the Historians. Edited by F. A. Hayek. (Routledge & Kegan Paul. 10s. 6d.) ONE of the most potent forces in politics is the belief that at a certain period of past time certain conditions existed for certain reasons. For example, it is widely believed that between the wars the Govern- ment in Britain was Conservative and that there were millions unemployed. On the assumption that these two supposed facts are connected as cause and effect, the deduction is drawn that the elector who disapproves of unemployment should not vote Conservative.

Another combination of false history and false reasoning which has exercised immense influence, is the following. `In the earlier part of the nineteenth century occurred the Industrial Revolution. During the Industrial Revolution large numbers of the working classes had a low standard of living. The Industrial Revolution was accompanied by an increase in the amount of productive capital in private ownership ("capitalism"). Therefore capitalism is the cause of low living standards for the working classes and should be abolished.' That the premises of this conclusion are substantially false has long been known to economic historians. But the general belief in their truth persists even amongst those who resist drawing from them the fallacious conclusion.

Capitalism and the Historians is a collection of five essays with an Introduction, which asks and partly answers the questions, How far were these beliefs mistaken? and, Why did they arise and so success- fully resist both logical argument and factual evidence to the contrary? On the first question Professor Ashton shows that the standard of life of the British working classes did not in fact decline but upon the whole somewhat rose between 1790 and 1830. He also demon- strates that industrialisation not only made it possible to maintain a rapidly increasing population without a fall in the standard of living but also formed the basis for the subsequent improvement. Certain specially celebrated features of social conditions in the Industrial Revolution, such as jerry-building, are shown to be due more to state Intervention than to the behaviour of the industrialists. It was ih itself an evidence of rising standards that conditions which would previously have remained unremarked began to attract the attention of Parliament and the public in the early decades of the nineteenth century.

The writers are more concerned with the second question: how the false interpretation of the facts survived. Professor Hutt contributes an article—significantly first published nearly thirty years ago— showing how the social historians have used sources which were recognised by contemporaries as biassed or even false. For example, Michael Sadler's Select Committee on Factory Children's Labour in 1832 is one of the main sources for descriptions of the state of the working population at that time. Yet the Commission on the Employ- ment of Children in Factories, which reported in 1833 and 1834, proved much of Sadler's Report to be unfounded. In reality it %, a partisan document, produced in order to support the Ten Hour* Bill. Similarly Peel's Committee of 1816 on Children Employed in Manufacture is accepted, but the impressive medical evidence of the Lords' Committee on the same subject two years later ignored. A detailed investigation of contemporary descriptions reveals that the lurid touches which have built up the classical picture of social conditions in the Industrial Revolution are mostly derived fro% indirect, 'biassed or sentimental sources, while direct observers and unbiassed documents provide evidence of a very different tenor.

Less satisfying are the contentions of Mr. Hacker and M. do Jouvenel. The former argues that American historians in the present century have tended to be anti-capitalist, and consequently to avail themselves of the kind of false history and false logic discussed above, because they have been predominantly `Jeffersonian'; that is, thei# moral interest in equality and the defence of human rights has put them on the side of those figures in American history who for other reasons have also been anti-industrialist, from Jefferson to Roosevelt. M. de Jouvenel argues that political opinion in the last 100 years has been formed by an intelligentsia unconnected (as in the past) with the wealthy classes and valuing non-economic and there- fore 'unprofitable' ends. Consequently, by a confusion of thought,. it was inspired with a latent prejudice against any successful economic activity.

It seems the temptation to assume connections of cause and effect without proof is almost irresistible ; for the authors of this book themselves sometimes fall into theyery type of error they are assailing. Professor Hayek in his introduction refers to' the freedom of econornig activity which in England had proved so favourable to the rapid growth of wealth,' and again to 'the undeniable wealth which the competitive order has produced.' These sentences contain assump• tions less crude but not necessarily less debatable than those which the book is devoted to demolishing.