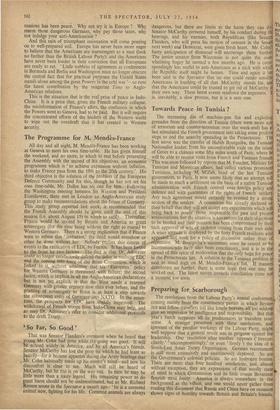 That was Senator Flanders's comment when he heard that young Mr. Cohn had gone while the going was good. It will be echoed widely in America, and by all America's friends. Senator McCarthy has lost the prop on which he had leant so heavily—for it became apparent during the Army hearings that Mr. Cohn habitually made up his master's mind--and now his discomfort is clear to see. Much will still be heard of McCarthy, but he too is on the way out. In time he may be little more than a nasty legend. His remaining power to do g.reat harm should not be underestimated, but as Mr. Richard Rovere wrote in the Spectator a month ago : 'he is a cornered animal now, fighting for his life. Cornered animals are always dangerous, but there are limits to the harm they can do Senator McCarthy cornered himself, by his conduct during t hearings, and his enemies, both Republican (like Senat Flanders, who will press his motion of censure in the Sena next week) and Democrat, were given fresh heart. Mr. Cohn' hasty anticipation of dismissal will encourage them further The junior senator from Wisconsin is not quite the ove whelming bogey he seemed a few months ago. He is corre spondingly less useful to anti-Americans as a stick with \Ville the Republic itseif might be beaten. Time and again it h been said in the Spectator that no one could outdo sensibi Americans in loathing of all that McCarthy stands far, that the Americans 'could be trusted to get rid of McCarthy their own way. These latest events reinforce the argument. is, inevitably, a slow process, but it is a sure one.