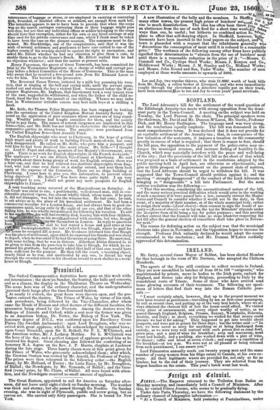 The Lord Advocate's bill for the settlement of the vexed question of the Edinburgh Annuity-tax meets with strong opposition from the domi- nant party in the Town-Council. A meeting on the subject was held on Tuesday, the Lord Provost in the chair. The principal speakers were the chairman, Mr. David and Mr. Duncan M‘Laren, Mr. Grorrie, Professor Dick, and Mr. Henry Darlington. The language used was very strong,. and the resolutions equally emphatic. The bill was denounced in the most comprehensive terms. It was declared that it does not provide for an equitable settlement of the Annuity-tax ; that, in consequence of the low valuation of the seat-rents, it imposes a taxation on the community greatly in excess of what is required ; that there is reason to fear, should the bill pass, the opposition to the payment of the police-rates may en- • danger the municipal revenue, and increase feeling of hostility to the Church, which may materially interfere with the peace and well-being of the city ; that the provisions of the bill fall so far short of that which was proposed as a basis of settlement in the resolutions adopted by the public meeting held in April last, are otherwise so objectionable, and give so little prospect of improvement on the present state of matters, that the Lord Advocate should be urged to withdraw his bill. It was suggested that the Town-Council should petition against it ; and the meeting "strongly disapproved" of the conduct of the Lord Advocate in bringing so " disagreeable " a bill into Parliament. But the most curious resolution was the following :—

" That this meeting, considering the unconstitutional nature of the bill, and the many serious practical difficulties which would arise in the working of such a measure if it were passedinto a law, earnestly entreat the Magis- trates and Council to consider whether it would not be the duty., in that event, of a majority of their number, or of the whole municipal body, rather to resign their seats—(Loud elisers)—than consent to sign the bonds of an- nuity—(Benetced cheers)—or to lay on the tax for Ministers' stipends under the deceptive form of its being a tax for police purposes ; and this meeting further entreat that the Council will take no steps whatever respecting the Act till after the general election of councillors shall take place in Novem- ber next."

The reason for deferring action on the subject was that the mimicipaP elections take place in November, and the Opposition hopes to increase its strength. Professor Dick valiantly declared he would adopt the course recommended in the resolution ; and Mr. Duncan M‘Laren cordially approved of this determination.