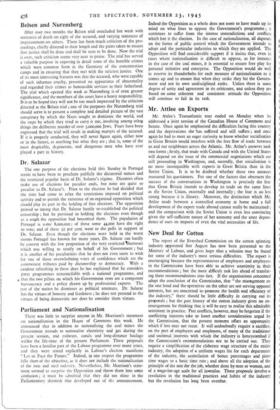 After over two months the Belsen trial concluded last week with sentences of death on eight of the accused, and varying sentences of imprisonment on others. There has been much criticism of the pro- ceedings, chiefly directed to their length and the pains taken to ensure that justice shall be done and shall be seen to be done. Now the trial is over, such criticism seems very near to praise. The trial has served a valuable purpose in exposing in detail some of the horrible crimes which were common form in the Germany of the concentration camps and in ensuring that they met with the strictest justice. One of its most interesting features was that the accused, who were capable of such inhuman cruelty, presented no appearance of abnormality and regarded their crimes as honourable services to their fatherland. The trial which opened this week at Nuremberg is of even greater significance, and the members of the court have a heavy responsibility. It is to be hoped they will not be too much impressed by the criticism directed at the Belsen trial ; one of the purposes the Nuremberg trial should serve is to present a complete and detailed picture of the vast conspiracy by which the Nazis sought to dominate the world, and the steps by which they tried to carry it out, involving among othe; things the deliberate murder of over 5,000,000 Jews. Fears have been expressed that the trial will result in making martyrs of the accused. If it is properly conducted, they will never figure again, either now or in the future, as anything but what they are ; that is, some of the most despicable, degenerate, and dangerous men who have ever played a part in history.