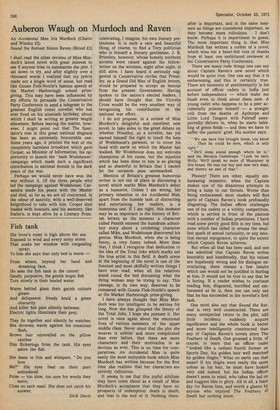 Auberon Waugh on Murdoch and Raven

An Accidental Man Iris Murdoch (Chatto and Windus £2) Sound the Retreat Simon Raven (Blond £2) I shall read the other reviews of Miss Murdoch's latest novel with great interest to see if anyone tries to summarize the plot. I sat down to try, and after slightly over a thousand words I realized that my précis made not a single word of sense, but read like Gussie Fink-Nottle's famous speech at the Market Harborough school prizegiving. This may have been influenced by my efforts to persuade the Conservative Party Conference to send a telegram to the greatest English comic novelist who has ever lived on his ninetieth birthday, about which I shall be writing at greater length elsewhere. Before leaving the matter, however. I might point out that The Spectator's role in this great national disgrace has been an extremely honourable one. Some years ago, it printed the text of the completely harmless broadcast which gave Cooper, as Minister of Information, his opportunity to launch the 'bash Wodehouse' campaign which made such a significant contribution to national morale in the dark years of the war.

Perhaps we would never have won the war without it. Of the three people who led the campaign against Wodehouse, Cassandra made his peace with the Master and died, so far as we are all concerned, in the odour of sanctity, with a well-deserved knighthood to take with him. Cooper died loaded with honours, and his memory, like Stalin's, is kept alive by a Literary Prize, celebrating, I imagine, his own literary pretensions. It is such a rare and beautiful thing, of course, to find a Tory politician who is himself a literary gentleman. J. B. Priestley, however, whose homely northern accents were raised against his fellowwriter on the wireless, night after night, is still alive. I have heard it seriously suggested in Conservative circles that Priestley, as a Grand Old Man of English letters, would be prepared to accept an honour from the present Government. Having spoken to the nation's elected leaders, I should have thought that the Victoria Cross would be the very smallest way of recognizing his contribution to the national war effort.

I do not propose, in a review of Miss Murdoch's delightful and excellent new novel, to take sides in the great debate on whether Priestley, as a novelist, has yet earned himself the right to touch the hem of Wodehouse's garment, or to cover his head with earth on which the Master has walked. Mr Wodehouse does not welcome champions of his cause, but the injustice which has been done to him is so glaring and so shameful to Britain that I cannot let the occasion pass unremarked.

Mention of Britain's greatest humorous writer is not out of place in discussing a novel which marks Miss Murdoch's debut as a humorist. Unless I am wrong, her primary intention in An Accidental Man, apart from the humble task of distracting and entertaining her readers, is a humorous one. If I am right, this moment may be as important in the history of British letters as the moment a character called Psmith entered the humdrum schoolboy story about a cricketing character called Mike, and Wodehouse discovered his genius. Miss Murdoch, when she is being funny, is very funny indeed. More than that, I think I recognize that dedication to the idea of the Total Joke which marks out the true artist in this field. A death scene at the beginning of the novel is one of the funniest and most skilfully written things I have ever read, when all the relatives stand round the bed discussing what the dying woman may be trying to say. This passage, in its own way, deserves to be compared with Gussie Fink-Nottle's speech at the Market Harborough prize-giving.

I have always thought that Miss Murdoch was too intelligent to be serious for long. Now she has glimpsed the theory of the Total Joke, I hope she pursues it. Her novel is once again about the emotional lives of various members of the upper middle class. Never mind that the plot she weaves is subtler and more complicated than ever before, that there are more characters and their motivation is as devious as ever. This is no time for comparatives. An Accidental Man is quite easily the most enjoyable book which Miss Murdoch has written because for the first time she realizes that her characters are entirely ridiculous.

It seems to me that this joyful nihilism may have come about as a result of Miss Murdoch's acceptance that they have no prospects of redemption: death is death, and that is the end of it. Nothing there after is important, and in the same measure as things are considered important, so they become more ridiculous. I don't know. Perhaps it is impertinent to guess. The most important thing is that Miss Murdoch has written a corker of a novel, which wins her a heart-felt vote of thanks from at least one embittered reviewer at the Conservative Party Conference.

There are many rude things one can say about Captain Raven's new novel which would be quite true. One can say that it is embarassing, and this is certainly true. There are moments of sentimentality in his account of officer cadets in India just before independence — which make me blush even to think about them now. A young cadet who happens to be a peer accidentally poisons himself — a straight crib from the deaths of Apthorpe and Little Lord Tangent with Falstaff unexpectedly thrown in, when he starts babbling of green fields — and then we have to suffer the parents' grief. His mother says:

"We can have him brought home, you know . . Then he could be here, which is only right."

"He'll sleep sound enough where he is," said the Marquis Canteloupe. "Look 'ee here, Molly. We'll speak no more of Muscateer in this house. He was our boy and now he's dead, and there's an end of that."

Phooey! There are other, equally embarassing moments, when the Captain makes one of his disastrous attempts to bring a lump to our throats. Worse than being embarassed, most readers will find parts of Captain Raven's book profoundly disgusting. The Indian officer challenges one of his cadets to a virility competition, which is settled in front of the platoon with a number of Indian prostitutes. I have read some pretty good filth in my time, but none which has failed to arouse the smallest spark of sexual curiousity, or any emotion except repugnance, to quite the extent which Captain Raven achieves.

But when all that has been said, and one has admitted that Captain Raven writes boorishly and hamfistedly, that his values are hopelessly wrong and his dialogue excruciating, there remain a few insults which one would not be justified in hurling at him. It would not be true to say that he is boring. If a reader wishes to continue reading him, disgusted, horrified and embarassed as he is, then one can only say that he has succeeded in the novelist's first task.

One must also say that Sound the Retreat is very well constructed. There are many unexpected twists in the plot, odd little incidents suddenly acquire significance and the whole book is better and more intelligently constructed than any of Captain Raven's novels since The Feathers of Death. One groaned a little, of course, to learn that an officer cadet "looked like a radiant fourth former on Sports Day, his golden hair well matched by golden thighs." What on earth can that mean? If his thighs were really the same colour as his hair, he must have looked very odd indeed, but the Indian officer doesn't seem to mind, who takes the lad on and buggers him to glory. All in all, a feast day for Raven fans, and worth a glance bY anyone who enjoyed The Feathers of Death but nothing since.