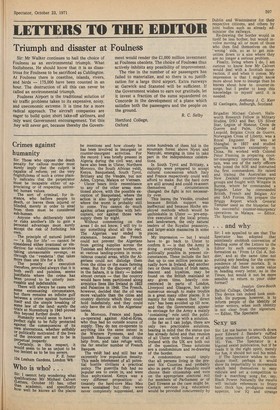 Sir: Those who oppose the death Penalty for callous murder must surely imply that the culprit is capable of reform; yet the very frightfulness of such a crime plainlY indicates that the perpetrator must be incapable either of appreciating or of respecting universal human values.

The sort of criminal, for instance, who batters people to death, or leaves them injured or blinded, merely in order to steal from them must be considered sub-human.

Anyone who deliberately takes or risks another's life to gain a Personal advantage must surely accept the risk of forfeiting his own.

The principle of natural justice 'a life for life' cannot he considered either irrational or vindictive: for vindictiveness involves taking unreasonable revenge, as through the 'vendetta' that takes more than one life for a life.

The penalty of execution therefore, provided always that it is both swift and painless, seems lustiflable where the crime has been proved to be utterly inexcusable and indefensible.

There will always be cases with some extenuating circumstance, but there remains an infinite gulf between a crime against humanity Itself and the simple breaking of some law of the land: surely the trials at Nuremburg in 1945 proved this beyond further doubt. Humanity would seem to have a Perfect right to be fully protected against the consequences of its Own aberrations, whether selfishly or politically motivated: if the lives of the innocent are not to be in Perpetual jeopardy.

Certainly, in this respect, it would seem to be as unjust to be too lenient as to be too severe.