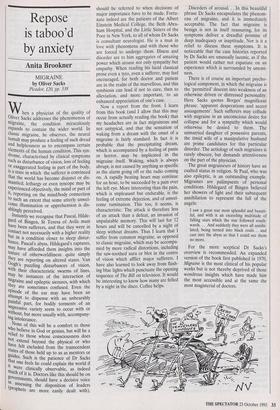 Repose is taboo'd by anxiety

MIGRAINE by Oliver Sacks Picador, £20, pp. 338 When a physician of the quality of Oliver Sacks addresses the phenomenon of migraine, the condition miraculously expands to contain the wider world. In classic migraine, he observes, the neural tumult may produce a feeling of such dread and helplessness as to encompass certain elements of the human condition. This syn- drome, characterised by clinical symptoms such as disturbance of vision, loss of feeling or exaggerated feeling in part of the body, Is a state in which the sufferer is convinced that the world has become disjunct or dis- mantled; lethargy or even syncope may be experienced objectively, the mind or part of a, reporting on the mind/body connection to such an extent that some utterly unwel- come illumination or apprehension is dis- ablingly perceived. Instantly we recognise that Pascal, Hilde- gard of Bingen, St Teresa of Avila must have been sufferers, and that they were in contact not necessarily with a higher reality but in a condition closer to sleep distur- bance. Pascal's abyss, Hildegard's raptures, may have afforded them insights into the nature of otherworldliness: quite simply they are reporting on altered states. Van Gogh's puzzling disturbances of vision, with their characteristic swarms of lines, may be instances of the interactionof Migraine and epileptic siezures, with which they are sometimes confused. Even the episode of the ear may have been an attempt to dispense with an unbearably Painful part, for bodily torments of an in?pressive variety seem to occur with or without, but more usually with, accompany- ing intolerance. None of this will be a comfort to those who believe in God or genius, but will be a relief to those whose consciousness does have extend beyond the physical or who nave felt excluded from the transcendent states of those held up to us as mentors or guides. Such is the patience of Dr Sacks that one feels he could explain the world if it were clinically observable, as indeed Much of it is. Doctors like this should be on governments, should have a decisive voice In assessing the disposition of leaders (Prophets are more easily dealt with),

should be referred to when decisions of major importance have to be made. Fortu- nate indeed are the patients of the Albert Einstein Medical College, the Beth Abra- ham Hospital, and the Little Sisters of the Poor in New York, to all of whom Dr Sacks is consultant neurologist. He is a man in love with phenomena and with those who are forced to undergo them. Illness and disorder are to him aggregates of amazing power which arouse not only sympathy but empathy. When reading his lucid classical prose even a tyro, even a sufferer, may feel encouraged, for both doctor and patient are in the realm of the marvellous, and this symbiosis can lead if not to cure, then to alleviation, and more important, to an enhanced appreciation of one's case.

Now a report from the front. I learn from this book (and I allow that this may occur from actually reading the book) that my headaches are in fact migrainous and not untypical, and that the sensation of waking from a dream with the onset of a migraine is fairly standard. In fact it is probable that the precipitating dream, which is accompanied by a feeling of panic or horror, may be implicated in the migraine itself. Waking, which is always abrupt, is not caused by anything as specific as the alarm going off or the radio coming on. A rapidly beating heart may continue for an hour, to be succeeded by a pain over the left eye. More interesting than the pain, which is unpleasant but endurable, is the feeling of extreme dejection, and of unwel- come rumination. This too, it seems, is characteristic. The attack is therefore less of an attack than a defeat, an invasion of unpalatable memory. This will last for 12 hours and will be cancelled by a night of sleep without dreams. Thus I learn that I suffer from common migraine, as opposed to classic migraine, which may be accompa- nied by more radical distortions, including the saw-toothed aura or blot in the centre of vision which afflict major sufferers. I have also learned to look away from flash- ing blue lights which punctuate the opening sequence of The Bill on television. It would be interesting to know how many are felled by a night in the disco. Coffee helps.

Disorders of arousal. . . In this beautiful phrase Dr Sacks encapsulates the phenom- ena of migraine, and it is immediately acceptable. The fact that migraine is benign is not in itself reassuring, for its symptoms deliver a dreadful promise of deep inadequacy or inaptitude. Nor is it a relief to discuss these symptoms. It is noticeable that the case histories reported by Dr Sacks are unusually laconic, as if the patient would rather not expatiate on an experience which is surrounded by uneasi- ness.

There is of course an important psycho- logical component, in which the migraine is the 'permitted' descent into weakness of an otherwise driven or distressed personality. Here Sacks quotes. Borges' magnificent phrase: 'apparent desperations and secret assuagements'. Such sufferers may collude with migraine in an unconscious desire for collapse and for a sympathy which would otherwise be denied to them. The unmarried daughter of possessive parents, the timid wife of a manipulative husband are prime candidates for this particular disorder. The aetiology of such migraines is rarely obscure, but demands attentiveness on the part of the physician.

The great migraineurs of history have an exalted status in religion. St Paul, who was also epileptic, is an outstanding example. Migraines are palimpsests of personal conditions. Hildegard of Bingen believed her showers of light and their subsequent annihilation to represent the fall of the angels:

I saw a great star most splendid and beauti- ful, and with it an exceeding multitude of falling stars which the star followed south- wards... And suddenly they were all annihi- lated, being turned into black coals. . . and cast into the abyss so that I could see them no more.

For the more sceptical Dr Sacks's overview is recommended. An expanded version of the book first published in 1970, Migraine is the most clinical of his popular works but is not thereby deprived of those wondrous insights which have made him the most accessible and at the same the most magisterial of doctors.