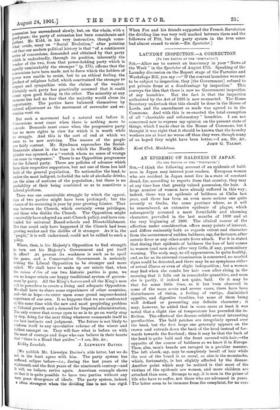 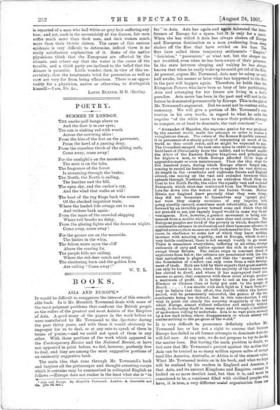 AN EPIDEMIC OF BALDNESS IN JAPAN.

[To THE EDITOR OF THE "SPECTATORn

SIR,—I think the following account of an epidemic of bald- ness in Japan may interest your readers. European women who are resident in. Japan must live in a state of constant dread, for, according to reports from that country, they may at any time lose that greatly valued possession, the hair. A large number of women have already suffered in this way ; indeed, there was an epidemic of baldness at Chiba last year, and there has been an even more serious one quite recently at Osaka, the same province where, as it will be remembered, an extensive epidemic of plague, which subsequently assumed a most formidable and alarming character, prevailed in the last months of 1899 and at the very beginning of 1900. The clinical course of the affection under consideration offers many-points of interest, and differs eminently both as regards extent and character from the occurrence of sudden baldness, say, for instance, after enteric fever or any other acute fever attack. For it is stated that during that epidemic of baldness the loss of hair comes to women (and men also) after very little, if any, premonitory _ warning. The scalp may, to all appearances, be quite healthy, and, as far as its external examination is concerned, no morbid signs could be detected, and there may be no symptoms either of actual illness or even of slight indisposition; but a woman may find -when she combs her hair soon after rising in the morning that it falls out in remarkable quantities, and soon she is partly, if indeed not quite, bald. Or it may be that for some little time, as it has been observed in some of the more acute and severe cases, there have been disturbances of vision, a feeling of vertigo, diminished appetite, and digestive troubles, but none of them being well defined or presenting any definite character ; it may, however, be added that in some cases at least it was noted that a slight rise of temperature has preceded the in- fliction. The effects of the disease exhibit several interesting peculiarities. The bald patches are irregularly spread over the head, but the first large one generally appears on the crown and extends down the back of the head instead of for- wards towards the forehead ; thus it may be that the back of the head is quite bald and the front covered with hair,—the opposite. of the course of baldness as we know it in Europe. Then, also, men's beards are ravaged in a peculiar manner. The left cheek, say, maybe completely bereft of hair while the rest of the beard is as usual, as also is the moustache, which, fortunately; is but slightly affected by the disease. Another point which may be noticed is that most of _ the victims of the epidemic are women, and more children are attacked than men. Strange to say, it is men in the prime of life who have to suffer, not those who are advanced in years. The latter seem to be immune from the complaint, for no casa

is reported of a man who had *bite or grey hair suffering any loss; and yet, such is the eccentricitY of the disease, fair men. suffer much more than dark men, and dark women. much more than their blonde sisters... The. cause of this curious epidemic is very . difficult to determine, indeed there it no really satisfactory explanation of it. Some of the native physicians think that the Europeans are affected by the and others say that the water is the cause of the trouble, and a third party are inclined to the belief that the disease is parasitic. Little wonder, then, in view of this un- certainty, that the treatments tried for prevention as well as cure are very far from being efficacious. There is an oppor- tunity for a physician, native or otherwise, to distinguish himself.—I am, Sir, &c.,