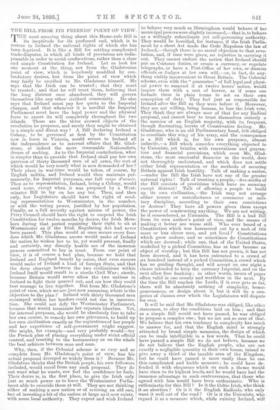 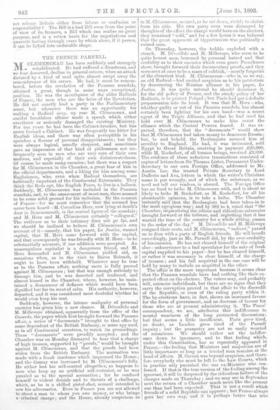 THE BILL FROM ITS FRIENDS' POINT OF VIEW. T HE most

amazing thing about this Home-rule Bill is its ineptitude for its professed end, which is to restore to Ireland the national rights of which she has been deprived. It is like a Bill for settling complicated trade-disputes, in which all kinds of provisions are indis- pensable in order to avoid confiscations, rather than a clear and simple Constitution for Ireland. Let us look for one moment at the thing, not from the Gladstonian point of view, which is hopelessly muddled by con- tradictory desires, but from the point of view which may fairly be ascribed to Mr. Gladstone himself. He says that the Irish can be trusted ; that they must be trusted ; and that he will trust them, believing that the long distrust once abandoned, they will govern themselves like any other civilised community. He also says that Ireland must pay her quota to the Imperial charges, and that whenever it is needful the Imperial Parliament must have the legal power and the physical force to assert its will completely throughout the two islands. Those are the three avowed objects of the revolution he proposes, and surely they might be obtained in a simple and direct way ! A Bill declaring Ireland a Colony, to be governed at first by the Constitution now in force in Victoria, would secure to Ireland all the independence as to internal affairs that Mr. Glad- stone, or indeed the more reasonable Nationalists, dream of seeking. As to the Imperial contribution, what is simpler than to provide that Ireland shall pay her own garrison of thirty thousand men of all arms, the cost of which would be very nearly what is now demanded of her ? Their place in war-time would be taken, of course, by English militia, and Ireland would thus maintain per- manently, for Imperial purposes, one full corps d'arm.de. Then as to representation, Ireland, being a Colony, would need none, except when it was proposed by a West- minster Bill to lay on her any tax. Then, and then only, her Legislature should have the right of send- ing representatives to Westminster, in the number, or with the voting power, justified by her population. Finally, as a full security against misuse of power, the Privy Council should have the right to suspend the Irish Constitution for twelve months by decree, the Irish Mem- bers during that period regaining their right to sit at Westminster as if the Irish Regulating Act had never been passed. This plan would at once secure every free- dom which Mr. Gladstone avows would make of Ireland the nation he wishes her to be, yet would prevent, finally and certainly, any directly hostile use of the immense powers committed to her in trust. From our point of view, it is of course a bad plan, because we hold that Ireland and England benefit by union, that even success would make of Ireland a kind of foreign State, and that the deep cleavage between the two civilisations within Ireland itself would result in a sterile Civil War ; sterile, because Britain would never allow the two nations in Ireland to fight their quarrel out, and see how they could best manage to live together. But from Mr. Gladstone's point of view, which we are just now assuming, where is the objection to the plan ? Ireland with thirty thousand men encamped within her borders could not rise in insurrec- tion. She could not defy the Westminster Parliament, because that would terminate her separate liberties. Yet, for internal purposes, she would be absolutely free to take her own course, to remedy her own grievances, to build up her own civilisation exactly as the aspirations of her people and her experience of self-government might suggest. She might, for example—and very probably would—try the French plan of placing everything under strict official control, and trusting to the bureaucracy as on the whole the hest arbiters between man and man.

Why, then, if the Colonial scheme is so easy and so complete from Mr. Gladstone's point of view, has his actual proposal diverged so widely from it ? Because Mr. Gladstone thinks that the British people, his own followers included, would recoil from any such proposal. They do not want what he wants, nor feel the confidence he feels. Their desire is, in the first place, to give the Irish only just so much power as to leave the Westminster Parlia- ment able to override them at will. They are not thinking either of making a new nation or of reviving an old one, but of investing a bit of the nation at large as it now exists, With some local authority. They expect and wish Ireland to behave very much as Birmingham would behave if her municipal powers were slightly increased,—that is, to behave as a willingly subordinate yet self-governing authority. They would be horrifled, for instance, if the Irish Parlia- ment by a short Act made the Code Napoleon the law of Ireland,—though there is no moral objection to that revo- lution, and, if time were given, no injustice in carrying it out. They cannot endure the notion that Ireland should put on Customs duties, or create a currency, or regulate telegraphs, or have a Post-Office of her own, or dismiss officials or Judges at her own will,—or, in fact, do any- thing visibly inconvenient to Great Britain. The Colonial scheme, even with the "guarantee" of full legal and physi- cal power to suspend it at twelve hours' notice, would inspire them with a sort of horror, as if some one forbade them in plain terms to act on their own conception of duty. They feel just as responsible for Ireland after the Bill as they were before it. Moreover, they are not willing, being human, to lose the Irish vote. They think they are always sure of that for any Radical proposal, and cannot bear to trust themselves entirely ,o the mercies of an English majority, with its frequent, though fluctuating, bursts of Conservative feeling. Mr. Gladstone, who is an old Parliamentary hand, felt obliged to conciliate this wing of his army, and the consequence is a Bill which is, for his own purposes, almost imbecile,—a Bill which concedes everything objected to by Unionists, yet bristles with reservations and guaran- tees and financial provisions, which even Mr. Glad- stone, the most successful financier in the world, does not thoroughly understand, and which does not settle either Irish representation or the methods of securing Britain against Irish hostility. Talk of making a nation, —under the Bill the Irish have not one of the greater national rights ! Talk of trusting a people,—five-sixths of the Bill consists of provisions which have no meaning except distrust ! Talk of allowing a people to build up its own civilisation,—the Irish may not arrange either tenure or manufactures or commerce or mili- tary discipline, according to their own convictions or desires ! They have all powers given them except the power of constructing anything. We are not writing, be it remembered, as Unionists. The Bill is a bad Bill from its own author's point of view, and the means of making it better are worse still. Who ever heard of a Constitution which was hammered out by a mob of 666 more or less clever men, and yet lived ? Constitutions which grow endure, and so sometimes do Constitutions which are decreed ; while one, that of the United States, modelled by a picked Committee, has at least become an object of worship ; but this Bill has not grown, it has not been decreed, and it has been entrusted to a crowd of six hundred instead of a picked Committee, a crowd which has no guiding thought, and will accept on one night a clause intended to keep the currency Imperial, and on the next allow free banking ; in other words, issues of paper often valid in one county and worthless in the next. By the time the Bill reaches the Lords, if it ever gets so far, there will be absolutely nothing of simplicity, homo- geneousness, or design about it, but it will be a con- geries of clauses over which the Legislatures will dispute for ever.

It will be said that Mr. Gladstone was obliged, like other statesmen, to obey the conditions laid on him ; and that as a simple Bill would not have passed, he was obliged to propose a complex one ; but we are not so sure of that. We believe that his own tendency to complexity has much to answer for, and that the English mind is strongly attracted by broad simple measures, the design of which can be made intelligible in a few words. That he could have passed a simple Bill we do not believe, because we do not believe that the English people, who are not exactly a negligible quantity in their own house, intend to give away a third of the taxable area of the Kingdom, but he could have passed it more easily than he can this complicated and feeble measure ; he could have de- fended it with eloquence which on such a theme would have risen to its highest levels, and he would have had the immense advantage in such controversies, that those who agreed with him would have been enthusiastic. Who is enthusiastic for this Bill ? Is it the Celtic Irish, who think it an abortion ? Or is it the English Radicals, who only want it well out of the road ? Or is it the Unionists, who regard it as a measure which, while ruining Ireland, will not release Britain either from labour or confusion or responsibility P The Bill is a bad Bill even from the point Of view of its framers, a Bill which can realise no great purpose, and is a rotten basis for the negotiations and quarrels lasting through years by which alone, if it passes, it can be licked into endurable shape.