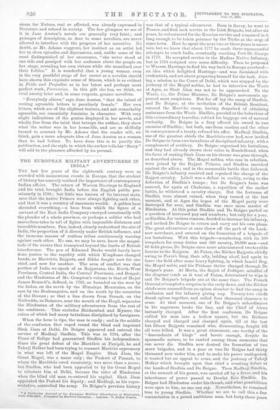 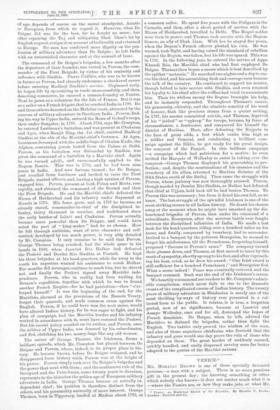 THE EUROPEAN MILITARY ADVENTURERS IN INDIA.* THE last few years

of the eighteenth century were so crowded with momentous events in Europe, that the student of history has scarcely realised the importance of contemporary Indian affairs. The return of Warren Hastings to England and his trial, brought India before the English public pro- minently in 1788; but little was known of its internal state, save that the native Princes were always fighting each other, and that it was a country of enormous wealth. A golden haze shrouded everything,—a haze from which the figure of a servant of the East India Company emerged occasionally with the plunder of a whole province, or perhaps a soldier who had marvellous tales to tell of fights with impossible distances and incredible numbers. Few, indeed, clearly understood the size of India, the proportion of it directly under British influence, and the immense masses of restless tribes continuously warring against each other. No one, we may be sure, knew the magni- tude of the events that transpired beyond the limits of British interference. The pen of Edmund Burke would barely have done justice to the rapidity with which 1Cingdoms changed hands, as Alarathas, Rajputs, and Sikhs fought now for one chief, and now for another. The area of conflict was that portion of India we speak of as Rajputana, the North-West Provinces, Central India, the Central Provinces, and Bengal; and the Hindustan of Mr. Compton's volume is that of Major James Rennell's, defined, in 1785, as bounded on the west by the Indus, on the north by the Himalaya Mountains, on the east by the Brahmaputra,, and on the south by the countries of the Deccan ; so that a line drawn from Broach, on the Nerbudda, to Balasore, near the mouth of the Hugh, separates the Hindustan of the military adventurers from the rest of the continent. This excludes Haidarabad and Mysore, the rulers of which had many battalions disciplined by foreigners.

The command of De Boigne's brigades, a few months after the departure of their founder, was vested in Perron, the com- mander of the First Brigade, by virtue of his seniority and influence with Sindhia. Pierre Cuillier, who was to be known in future as Perron, had already undergone a checkered career before entering Madhoji Sindhia's service. Orphaned early, he began life by speculating in trade unsuccessfully, and then, deserting commerce, he entered a cannon-foundry at Nantes. Next be poses as a volunteer for the Isle of France. But it was as a sailor on a French frigate that he reached India in 1780. He and three others deserted on the Malabar coast, attracted by the success of military adventure in Southern India. Perron, find- ing his way to Upper India, entered the Rana of Gohad's corps, then under Sangster, in 1781. About 1784., says Mr. Compton, he entered Lestineau's battalion, and was present at Chakstina and Agra, when Ran* Sing, the Jit chief, assisted Madhoji Sindhia at the ebb of the Martithi chief's fortunes. At Agra, Lestineau decamped with the saddle-bags of Ghulan Ka.dir, the Afghan, containing jewels looted from the Palace at Delhi. Perron, as his battalion was disbanded by Sindhia, was given the command of a battalion by a Mar:ILIA, chief. Again he was turned adrift, and unsuccessfully applied to the Begum Somru. This was in 1790, and he had been nine years in India. And now fortune turned ; for De Boigne, just recalled from Lucknow and invited to raise the First Brigade, wanted officers, and, having a high opinion of Perron, engaged him. Perron, present at both Pitan and Pererta, rose rapidly, and obtained the command of the Second and then the First Brigade. He and the Marithi chiefs defeated the Nizam of Haidarabad and his infantry under Raymond at Karala in 1795. His fame grew, and in 1797 he became, as already stated, commander-in-chief of the disciplined in- f antry, thirty thousand in number, and undefeated since the early battles of Las& and Chaksina. Perron actually became more powerful than De Boigne, and could have acted the part of " king.maker " had he so chosen. How he fell through ambition, want of true character and self- control, developed by too much power, is very ably detailed by Mr. Compton. It only remains to be said that Perron, George Thomas being crushed, had the whole game in his hands in 1802, when Jasw tat Rio Haltom had defeated the Peshwi and Dowlat Rio Sindhia at Poonah. He kept his three brigades at his head-quarters, while far away to the south his superiors wanted his assistance to crush Holkar. For months did messages continue to reach him, but he stirred not, and finally the Peshwi, signed away Maratha inde- pendence. Perron, who in reality had been waiting for Decaen's expedition, together with which he was to found another French Empire—for he had patriotism—thus "o'er- leaped himself." It was the beginning of the end, for the Marithis, alarmed at the provisions of the Bassein Treaty, forgot their quarrels, and made common cause against the English. Perron, if he could have won the next move, would have altered Indian history, for he was eager to fight, and his plan of campaign, had the Maraitha hordes and his infantry worked in accordance with it, must have restored the Peshwit. But his recent policy recoiled on its author, and Perron, once the arbiter of Upper India, was deposed by his subordinates, and fled, clutching his two money-bags like any old woman.

The career of-' George Thomas, the Irishman, forms a brilliant episode, which Mr. Compton has placed between De Boigne and Perron, where, indeed, is its proper place in his- tory. He became known before De Boigne resigned, and he disappeared from history while Perron was at the height of his power. Perron simply took over De Boigne's brigades and the power that went with them ; and the continuous rule of the Savoyard and the Frenchman, some twenty years in duration, represents to the historian the golden age of European military adventure in India. George Thomas became an actually in- dependent chief ; his position is therefore distinct from the others, and his personality naturally of more interest. George Thomas, born in Tipperary, landed at Madras about 1782, as a common sailor. He spent five years with the Poligars in the Carnatic, and then, after a short period of service with the Nizam of Haidarabad, travelled to Delhi. The Mogul nobles were then in power, and Thomas took service with the Begum Somru, an ally of Shah Alam. With her he stayed five years, when the Begum's French officers plotted his ruin. He was warned, took flight, and having raised the standard of rebellion against the Begun), was taken, but his life was spared. This was in 1792. In the following year, he entered the service of Appa Khandi Rio, the Maratha chief who had first employed De Boigne. Thomas then began a career which is best described by the epithet "meteoric." He marched two nights and a day to res- cue his chief, and his astonishing dash and courage soon became the talk of the country. He continued to support his master, though bribed to take service with Sindhia, and even retained his loyalty to his chief after the ruffian had tried to assassinate him. Then his whilom enemy the Begum besought his help, and he instantly responded. Throughout Thomas's career, his generosity, chivalry, and the absolute sanctity of his word of honour, flash like precious stones from a quaint setting. In 1797, his master committed suicide, and Thomas, deprived of his " jaidad" or " upkeep " for troops, became, by force of circumstances, a freebooter, and conquered for himself the district of Harbina. Here, after defeating the Rajputs in the face of great odds, a feat which ranks him high as a soldier and General, and conducting a brilliant cam- paign against the Sikhs, he got ready for his great design, the conquest of the Panjab. In this brilliant campaign —a. campaign which had patriotism for a motive : he even invited the Marquis of Wellesley to assist in taking over the conquest—George Thomas displayed his generalship to per- fection; and, despite the combinations of his enemies and the treachery of his allies, returned to Hariana dictator of the Sikh States south of the Sutlej, Then came the struggle with Perron, whose jealousy was now thoroughly aroused. Perron, though needed by Dowlat Rho Sindhia, as Holkar had defeated that chief at Ujjain, held back till be had beaten Thomas, To Perron this was necessary; but from it dated his own fall, as we know. The last struggle of the splendid Irishman is one of the most striking scenes in all Indian history. He drank his chance away at the moment when he might have smashed up the dis- heartened brigades of Perron, then under the command of a subordinate, Bourguien, after the severest battle ever fought between the disciplined infantries of India. He made a list dash for his head-quarters, riding over a hundred miles on his horse, and finally, conquered by treachery, had to surrender. Invited to a banquet by the poltroon Bourguien, be seemed to forget his misfortunes, till the Frenchman, forgetting himself, proposed 'Success to Perron's arms." The company turned their glasses down, and Thomas, at first moved to tears by this mark of sympathy, shortly sprang to his feet, and after reproach- ing his host, cried, as he drew his sword : "One Irish sword is still sufficient for a hundred Frenchmen ;" and Bourguien tied. What a Beene indeed! Peace was eventually restored, and the banquet resumed. Such was the end of the Irishman's career.

We heartily recommend our readers to Mr. Compton's admir- able compilation, which never fails to rise to the dramatic events of the complicated course of Indian history. The twenty years of military adventure in Hindustan is surely one of the most thrilling by-ways of history ever presented in a col- lected form to the public. It relates, it is true, a forgotten period, now of no significance, because at Laswiri and Assaye Wellesley, once and for all, destroyed the hopes of French dominion. De Boigne, when he left, advised the Marithis to disband the brigades, rather than fight the English. Two battles only proved the wisdom of the man, and also of those sagacious chieftains who foretold that the infantry and guns would one day prove the ruin of those who depended on them. The great hordes of suddenly massed, quickly handled, and easily dispersed cavalry were far better adapted to the genius of the Marithit nations.