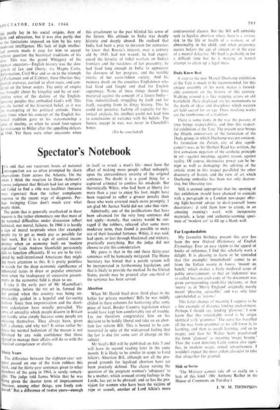 Abortion When Mr David Steel drew third place in the

ballot for private members' Bills he was mildly chided in these columns for hankering after some piece of local, Border Country legislation which would have kept him comfortably out of trouble. Let me therefore congratulate him on his decision to be boldly liberal and take on an abor- tion law reform Bill. This is bound to be con- troversial in spite of the widespread feeling that the law is due for some sort of change on this subject.

Mr Steel's Bill will be published on July 5 and will have its second reading later in the same month. It is likely to be similar in scope to Lord Silkin's Abortion Bill, although not all the pro- posed grounds for legalised abortion have yet been precisely defined. The clause raising the question of the pregnant woman's 'adequacy' to be a mother, which aroused strong feelings in the Lords, has yet to be phrased; and so has the pro- vision for women who have been the victims of rape or assault, another of Lord Silkin's more

controversial clauses. But the Bill will certainly seek to legalise abortion where there is a serious risk to the life or health of a woman, or of abnormality in the child; and when pregnancy occurs before the age of sixteen or in the case of a mental defective. Mr Steel is probably in for a difficult time but he is making an honest attempt to clean up a legal mess.