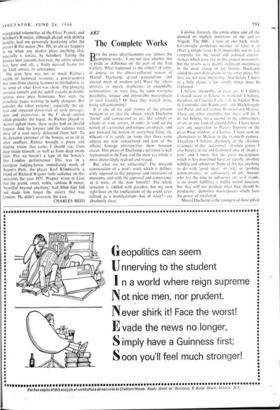 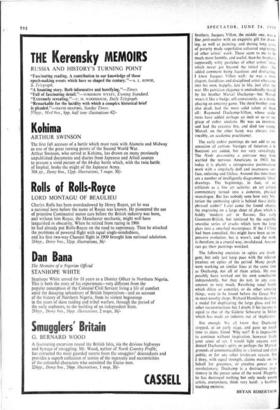 B1.7 the press advertisements say 'almost the complete works.' I am not sure whether this is pride or diffidence on the part of the Tate Gallery. What happened to the others? (I refer, of course, to the almost-collected oeuvre of Marcel Duchamp, grand panjandrum and elected myth of modern art.) Were the others inferior, or merely duplicates, or expendable commodities--or were they, by some worrying possibility, unique and immovable masterpieces of total fragility? Or have they wasted away, being self-consuming?

It is one of the arch ironies of the present moment in art that the objects which Duchamp 'found' and consecrated as art, like urinals or wheels or wine storers, in order to send up the notion of sacrosanct and unique art-objects, and put forward the notion of everything being sig- nificant—it is surely an irony that those same objects are now consecrated and part of the official homage retrospective show museum circus. This phase of Duchamp's activities is well represented at the Tate, and the show as a whole is most interestingly realised and staged.

But what are we witnessing? The museum canonisation of a man's work which is deliber- ately opposed to the purposes and intentions of museums, and with the approval and connivance, as it were, of the man himself? The whole situation is riddled with paradox, but my own sight-lines on the implications of the event, crys- tallised as a manifestation—but of what?—are absolutely clear.

I dislike intensely the entire ethos and all the avowed or implicit intentions of the anti-art brigade. The BBC, a year or two back, made harrowingly ponderous weather of what is in effect a simple issue. It is impossible not to feel sympathy for the social and political circum- stances which gave rise to this protest moveme,mt. but the results were mainly irrelevant marginalia in the main sweep of art history. Duchamp added his own distractions to the other ploys, but they are not very interesting. And before I move in a little closer, a few simple things must be explained.

I believe, invincibly, in great art. If I didn't,

should cease to believe in mankind. I believe, therefore, in Chartres Cathe,:ral, in Angkor Wat, in Leonardo and Rembrandt ,nd Michelangelo and Piero, and in C6zanne, Brancusi and Matisse. There are other examples, but these will do. I do not believe, for a second, in the arbitrariness of art, or any kind of expendability. I have never seen any equivalent to Piero's Baptism or the great Rose window at Chartres. I have seen no alternatives to Matisse in the twentieth century. Therefore, I believe absolutely in the absolute statement of the--occasional—absolute genius. 1 also believe in the old-fashioned idea of 'inspira- tion,' and I know that the great masterpieces which it has nourished have an equally absolute nobility and splendour. None of this has anything to do with 'good ideas,' or 'wit,' or 'probing commentaries,' or rediscovery of art. Anyone who has the time to rediscover art, as it stands, is no doubt fulfilling a mildly useful function, but they will not produce what they should be producing: definitive masterpieces which have the power of revelation.

Marcel Duchamp is the youngest of three gifted

brothers. Jacques Villon, the middle one, was a fine petit-maitre with an exquisite gift for draw- ing, as well as painting, and during long years of poverty made superlative coloured engravings of other artists' work. These seem to me to be much more humble, and useful, than his brother's supposedly witty pastiches of other artists' ideas which never got beyond the initial idea : the added comment being facetious and distracting. I knew Jacques Villon well : he was a most elegant, fastidious and disciplined artist who came into his own, happily, late in life, just after the war. His patrician elegance is undoubtedly shared by his brother Marcel Duchamp—but Marcel wears it like a badge, self-consciously, as a dandy playing an amusing game. The third brother. now also dead, had the most solid talent of them all: Raymond Duchamp-Villon, whose sculp- tures have added perhaps an inch 'or so to our grasp of cubist analysis. He was an inventor, and had the creative fire, and died too young. Marcel, on the other hand, was always, irre- vocably, an academic practitioner.

The early cubist paintings do not add to our sensation of cubism. Vestiges of futurism a In Boccioni are added, but not very revealingly. The Nude descending a staircase may have startled the nervous Americans in 1913. but today it is plainly a retrogressive portmanteau work with a singularly dull and insensuous sur- face, unloving and lifeless. Around this time there are a number of intelligently diagrammatic 'ideas' drawings. The beginnings, in fact, of art criticism as a fine art activity; an art critical commentary turned into a concrete, physical monologue. But has nobody seen how very Vic- torian the animating spirit is behind these deftly phrased asides? 1.ater came the found objects, the engraving on a large sheet of ,glass which is baldly 'modern art' in flavour, like early Gaumont-British, but retrieved by the superbly anarchic series of cracks which turn the large glass into a smashed masterpiece. If the I Ching had been consulted, this might have been an im- pressive evolution, but it wasn't, and the work is therefore, in a crucial way, invalidated. Anyone can get their paintings wrecked.

The following exercises in optics are intelli- gent, but only just keep pace with the relevant treatises on optics of the period. Many people were working on similar lines at the same time as Duchamp, not all of them artists. He may possibly have worked out his own conclusions independently, but they do not, in any case, amount to very much. Revolving tonal bands which dilate or constrict, or do other amusing things, were to be found before the Great War in most novelty shops. Richard Hamilton deserves -a medal for duplicating the large glass and for other reconstructions but I doubt if his income is equal to that of the Galerie Schwartz in Milan which has- made an industry out of 'duplicates.'

But enough. We all know that Duchamp stopped, at an early stage, and gave up much time to chess. Good. Why not? It is impossible to continue without inspiration, however lively your sense of art. I would fight anyone who denied Duchamp's spirit on perhaps the Marxist grounds of communicability to a limited and elect public, or for any. other irrelevant reasons But I deny, with equal strength, claims made on his behalf for greatness, or creative power as a

revolutionary. Duchamp is a destructive reac- tionary in the purest sense of the word. Happily, he has destroyed nothing but only made young artists, everywhere, think very hard: a healthy, teaching exercise.