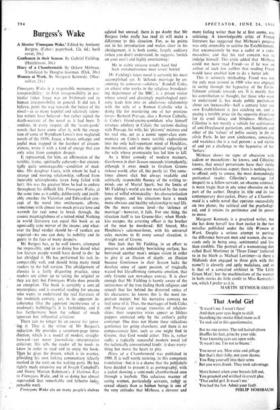 Gentlemen in their Season. By Gabriel Fielding. (Hutchinson, 30s.) Diary of a Chambermaid. By Octave Mirbeau.

millan, 21s.) Finnegans Wake is a responsible monument to irresponsibility : to Irish irresponsibility in par- ticular (since Joyce was an Irishman) and to human irresponsibility in general. It did not, I believe, point the way towards the future of the novel—as so many hopeful and relatively talent- less writers have believed—but rather signed the death-warrant of the novel as it had been. It outdoes, in every respect, all the 'avant-garde' novels that have come after it, with the excep- tion of some of Wyndham Lewis's now neglected novels of the 1930s. Joyce, a brave, unhappy and joyful man trapped in the harshest of circum- stances, wrote it with a kind of energy that can only arise from complete despair.

It represented, for him, an affirmation of the terrible, ironic, spiritually coherent—but existen- tially quite unmanageable—condition of mad- ass. His daughter Lucia, with whom he had a strange and moving relationship, suffered from incurable schizophrenia (even Jung failed with her); this was the greatest blow he had to endure throughout his difficult life. Finnegans Wake, at the same time as it coldly, deliberately and justifi- ably smashes the Victorian and Edwardian con- cept of the novel into smithereens, affirms, sometimes with almost too much private love and warmth for real sense to break through, the cosmic meaningfulness of a ruined Mind. Nothing in world literature can equal this book as an agonisedly sane mirror of the insane; and what- ever the final verdict should be—if verdicts are required—no one can deny its nobility and its gaiety in the face of many despairs.

Mr Burgess has, as he well knows, attempted the impossible, and in so doing has dared what few literate people would have dared to do: he has abridged it. He has performed his task in- comparably well, and should bring many timid readers to the full version. The abridgement of classics is a fairly disgusting practice, since readers are either up to taking the original or they are not; but Finnegans Wake does provide an exception. The book is certainly a sort,vg masterpiece, and is essential reading for anyone who wants to understand the real literature of the twentieth century; yet, in its apparent in- coherence (like the apparent incoherence of a madman's babblings?), it is forbidding, and it has furthermore been the subject of much ignorant but influential criticism.

There can no longer be an excuse for ignor- * ing it. That is the virtue of Mr Burgess's redaction. He provides a seventeen-page intro- action, which is a model of modest, straight- forward—yet never journalistic—interpretative criticism; this tells the reader all he needs to know in order to read and to enjoy the book. Then he gives the dream, which is its essence, providing his own linking commentary (clearly marked in the text) on the waking parts. He has rightly made extensive use of Joseph Campbell's and Henry Morton Robinson's A Skeleton Key to Finnegans Wake, and in so doing has almost superseded that remarkable and hitherto ind4s-

saluted but unread; there isgo doubt that Mr Burgess (who really has read it) will make a difference to this situation. For, as he points out in his introduction and makes clear in his abridgement, it is both comic, largely auditory (when you don't understand, he suggests, 'switch on your ears') and highly entertaining: My in risible universe youdly haud find Such oxtrabeeforeness meat soveal behind.

Mr Fielding's latest novel is certainly his most accomplished yet. It 'defends marriage by ex- amining its converse—adultery.' Randall Coles, an atheist who works in the religious broadcast- ing department of the BBC, is a prison visitor whose sexual and gloatingly psychological curi- osity leads him into an adulterous relationship with the wife of a Roman Catholic who is doing life for murdering one of her previous lovers. Bernard Presage, also a Roman Catholic, is Coles's friend-enemy-confidant who himself arranges adultery in Calais; the sections dealing with Presage, his wife, his 'platonic' mistress and his real one, act as a comic upper-class com- mentary on Coles's more terrible explorations into the only half-repentant mind of Hotchkiss, the murderer, and into the spiritual vulgarity of the wife whose promiscuity has led him to kill.

As a bitter comedy of modern manners, Gentlemen in their Season succeeds triumphantly, although it owes much to Graham Greene (whose world, after all, this partly is). The some- times almost slick but always readable and satirically responsible fluency of the writing re- minds one of Muriel Spark; but the limits of Mr Fielding's world are not marked by the same fence of wilful whimsicality—his characterisation goes deeper, and his situations have a much more obvious and healthy relationship to real life. On the more serious level—the 'defence of marriage'—however, it fails. For one thing, the situation itself is too Greene-like : when Hotch- kiss escapes, the arresting officer is the brother of the man he murdered; Bill Smeed, Mrs Hotchkiss's salesman-lover, with his universal sales maxims to fit every sexual situation, is straight out of Greene.

One feels that Mr Fielding, in an effort to preserve an undeniably bewitching surface, has borrowed another man's unique vision in order to give it an illusion of depth : an illusion because Gentlemen in their Season lacks the desolate sense of spent passion, of tragically wasted but life-affirming romantic emotion, that only Greene can nowadays convey. It is clear enough that Mr Fielding is keenly aware of the seriousness of the true feeling (both religious and sexual) that lies behind the distorted antics of his characters; he knows this is the most im- portant matter; but his narrative conveys no real sense of it. Thus, the marriages of both Coles and Presage are savage travesties of relation- ships; their respective wives appear as lifeless puppets animated only by the author's guilty contempt. One does not blame these ridiculous gentlemen for going elsewhere; and there is no compassionate hint, such as one might find in Greene, that God would either. This is, rather sadly, a typically successful modern novel (of the technically conventional kind): it does every- thing but move the heart to pity.

Diary of a Chambermaid was published in 1900. It is well worth reviving, in this competent translation—but it is a shame that the publishers have decided to present it as pornographic with a jacket showing a semi-nude chambermaid seen through a keyhole. This salacious manner of seeing women, particularly servants, rather as sexual objects than as hunt= beings is one of the very attitudes that Mirbeau, a cleverer and more feeling writer than he at first seems, was satirising. A knowledgeable critic of French literature has suggested that Mirbeau's purpose was only ostensibly to satirise the Establishment; that unconsciously he was a sadist or a sado- masochist, and that his real concern was to indulge himself. This critic added that Mirbeau could not have read Freud—as if he was an author of such low calibre that reading Freud would have enabled him- to do a better job.

This is seriously misleading. Freud was not the only man around in 1900 who was engaged in seeing through the hypocrisy of the Estab- lishment attitude towards sex. It is merely that his contribution to thought, for those who want to understand it, has made public puritanism about sex inexcusable—half a century later our own Establishment is just catching on, and is paying a, terrible price (in the opposite direction) for its cruel idiocy and blindness. Mirbeau's Cilestine is not merely a vehicle for satirisation of anti-Dreyfusard patriotism, anti-Semitism and other of the 'values' of polite society in fin de siecle Paris. In her own aimlessness, sensuality and weakness she is a real person : a sad victim of and yet a challenge to the hypocrisy of her `betters.'

Mirbeau shows no signs of obsession with sadism or masochism: he knows, and Celestine knows, that sexual perversions have their richly comic, even hilarious aspect; there is nothing here to offend, only to amuse, the most demandingly puritanical reader. Cdlestine's marriage (of despair) to a fellow-servant, an obscene criminal, is more tragic than in any sense obsessive on the part of the author. Despite its title and its too contemporary dust-jacket, Diary of a Chamber- maid is a subtle novel that operates successfully on two planes, the satirical, and the psychologi- cal, and it retains its pertinence and its power to move.

Margaret Kennedy is a practised writer, but she has done herself less than justice in the two novellas published under the title Women at Work. Despite a serious attempt to portray the difference between men and women, she suc- ceeds only in being cosy, sentimental and less than credible. The portrait of a womanising don called Basil Mortimer in `Three-Timer' (referred to in the blurb as Michael Lorrimer—is there a Midlands don engaged to three girls with this name?) is cleverly and aptly malicious, and so is that of a conceited architect in 'The Little Green Man'; but the machinations of the women in both stories do little credit to Miss Kennedy's sex, which I prefer as it is.